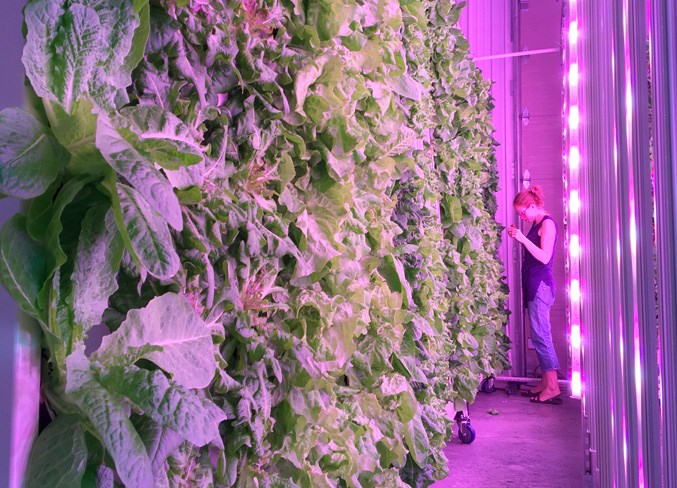 Munro Farms is giving new meaning to the saying “size isn’t everything.” The small family farming operation, based in Bragg Creek, uses innovative practices and a small footprint to supply restaurants with fresh produce – leafy greens and microgreens. Geoff Munro, who co-owns Munro Farms with his wife, Natasha, said their foray into farming started when their family became passionate about what they were eating. “The initial trigger was some food allergies that we were having,” Munro said. As they became more careful about what they were eating, Munro said his family began reading labels and paying attention to the origins of their food – and the practices used to produce it. Eventually, he said, the family decided to start growing their own produce, with practices and an environment they could control. Munro described Natasha and himself as having an entrepreneurial spirit, and after feedback from relatives about the quality of the produce they were growing, they decided to create a home-based business. Munro Farms was incorporated May 2017, and within a month, they had their first customer. Munro Farms grows and sells microgreens – the initial growth of a plant, harvested in its infancy. “It’s not a sprout – that’s where it’s confusing,” Munro said. “Sprouts are grown in a jar in a moist environment, and these are actually planted in dirt, then grown to an inch-and-a-half tall and harvested before the true leaves come out.” The farm uses two types of growing methods. The Munros employ dirt flats for microgreen crops including broccoli, bok choy, kohlrabi, cabbage, corn shoots, fava beans, sunflower shoots and pea shoots. For leafy greens like kale, lettuce, basil, swiss chard and arugula, the farm uses hydroponic towers. The towers are approximately eight to 10 feet tall and are fed by a circulating hydroponic system. Munro said they chose to use these growing practices because they wanted the farm to operate year-round, while keeping the scale of the operation small so they wouldn’t have to uproot from Bragg Creek – a community he said they’ve grown to love. Indeed, the entirety of Munro Farms’ footprint is 1,500 square feet. “It’s a shop on our property that a lot of people describe as clinical,” Munro said. “When you come in, it’s all white metal-clad walls and very clean and sterile environment. It’s out of the norm for a lot of people, when they think they’re coming to a greenhouse.” The scale of the operation allows the Munros to be selective in the type of produce they grow, which tend to be heirloom varieties that often aren’t available at major grocery stores. Munro said these rarer varieties, along with their year-round availability and farming practices, are among the things that set the farm apart in the minds of its customers. Currently, Munro Farms primarily sells to restaurants, with buyers in Calgary, Cochrane, Banff and Bragg Creek. The farm also sells its product at the Cochrane Farmers Market. “I think one of the things they really appreciate is that a head of lettuce I bring you today, in August, is going to be exactly the same as a head of lettuce I bring you in January,” Munro said. “It comes from the same facility and the same two people are seeding it, harvesting it, packaging it and delivering it to you.” Munro said at this stage, the family is looking at how to best expand the business. He posited they will probably try to grow their customer base to include restaurants in western Alberta – Banff, Canmore and Cochrane.