Chestermere’s newest playground doesn’t look like the ones you probably played on as a kid. Instead, it looks different each time it’s set up, with unconventional toys and other objects brought out of a truck for children to play with and explore.
Sep 11, 2018 12:01 AM By: Scott Strasser 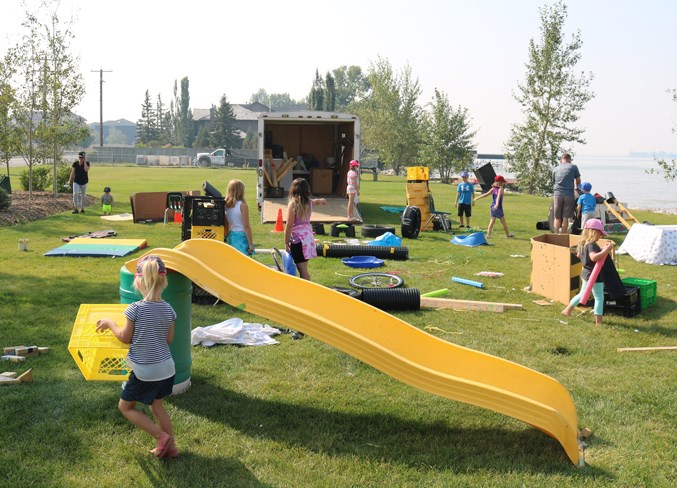 The City of Chestermere’s Mobile Adventure Playground gives children the opportunity to be creative with random donated objects and explore the concept of “free play.”

Chestermere’s newest playground doesn’t look like the ones you probably played on as a kid. Instead, it looks different each time it’s set up, with unconventional toys and other objects brought out of a truck for children to play with and explore. The City of Chestermere’s Mobile Adventure Playground (MAP) program is wrapping up its first summer of operation, and the City’s Recreation Co-ordinator, Katelyn Richards, said the first few months have been a resounding success. “It went really, really well. We had really great numbers,” she said. According to Richards, the idea for a mobile outdoor play space came after the City’s parks and recreation staff attended the International Play Conference in Calgary in 2017. It was at that conference where they learned about ‘free play’ and its importance to children’s development. “Typically, through research, we’ve found that kids in Canada and North America are being really structured in their play – they’re going to dance class, and those kinds of structured activities,” she said. “But it’s really important that kids get the opportunity to...control their own play, and not have adult intervention.” Considering the City of Calgary also has a MAP program, Richards said, the City of Chestermere reached out to its neighbouring municipality before setting up its own program last spring. Random objects like tires, rain barrels, plastic tubing and ladders were donated to the cause. “With the mobile adventure playground, [kids] get to come and explore and play with those materials, and we encourage the parents to step back, watch and allow their kids to take that on,” Richards said. “It really helps them build their confidence and expand their imagination – there are lot of benefits to this type of play.” According to Richards, Chestermere’s MAP saw an average of 10 to 20 kids visit each time it was set up throughout the summer. She said the program took place three days a week from 9 a.m. to 3:30 p.m., at various locations in the city, about 40 times – including on special occasions, like Canada Day. The City also conducted week-long pilot projects with the MAP at Our Lady of Wisdom School and East Lake School. Richards said those initiatives were successful, as well, with more than 250 kids from Our Lady of Wisdom and 180 from East Lake playing with the MAP per day. To garner feedback on the program, the City is now conducting a survey about the MAP for Chestermere residents, which will run until the end of September. Responses from that survey will be on the City’s website, she added. Richards said the City is currently reaching out to a few local schools to gauge interest in setting up some after-school opportunities with the mobile playground this fall, until the weather becomes too cold to continue playing outside.