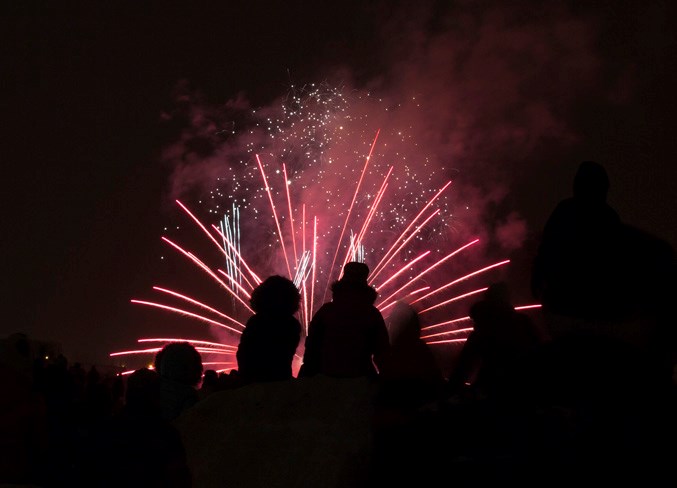 Airdrie&#8217;s firework display at Ed Eggerer Athletic Park is just one of the options for Rocky View County residents to ring in the New Year.

While limited, a few communities around Rocky View County (RVC) will see events to mark the end of 2018 and the beginning of 2019. The Langdon Firehouse will host a gala event to ring in the new year, featuring music by Calgary cover band Matt Beatty and the Hot Tamales, and a five-course meal including steak Neptune. “For local people, it’s the only place in Langdon that’s going to have a party,” said firehouse owner Aleesha Gosling. “We really go out of our way, with full decorations and entertainment and the best food. We really feel like it’s going to be the party not to miss.” Tickets must be purchased ahead of time, and are available in two different packages. Gosling said the full package, priced at $50, includes dinner, party favours, midnight snack, a champagne toast at midnight and a whiskey tasting conducted by a Jack Daniels representative. The party package includes everything except dinner, and costs $25. Tickets are available at the restaurant or online at langdonfirehouse.com Doors open for the event at 6 p.m., with dinner beginning at 7 p.m. The party kicks off with music at 9 p.m., and Gosling said last call will be at 2 a.m. She added the event is formal, and recommended participants dress up for the occasion. The Town of Crossfield will be holding its second annual Flight to Midnight at the Crossfield Community Centre. “We brought it last year, and we saw great success,” said Eris Latham, recreation and events co-ordinator with the Town. “We had a lot of great feedback, so we’re going to try it again this year.” According to Latham, Flight to Midnight is meant to offer a party option to Crossfield residents so they don’t have to travel outside the town to celebrate the New Year. The party – which will start at 9 p.m. and run until 2 a.m. – will feature a DJ and dance, food, a photo booth and free champagne at midnight, culminating in draws for $2,000 and a $500 WestJet gift card. No minors are allowed at the event – Latham said Flight to Midnight is the only event the Town offers that is not open to the whole family. “This year, we’ve arranged for a 15 [seat] passenger van for transportation for in-town guests,” Latham said. “Last year was bitter, bitter cold and a lot of people had planned on walking, so we lined up some transportation this year.” Unfortunately, Latham said, the deadline to purchase tickets has passed, and tickets will not be sold at the door. Families intent on seeing fireworks New Year’s Eve will have to make the trek to Airdrie. According to airdrieparades.com, the City’s fireworks display will light up the night sky at Ed Eggerer Athletic Park, located behind Genesis Place Recreation Centre, starting at 6:30 p.m. Attendees are encouraged to dress warmly for the outdoor display, and to carpool as parking is limited. Other communities in and around RVC have less to offer in the way of New Year’s Eve festivities. According to Natalie Turville, communications advisor with the Town of Cochrane, the Town has no formal events planned. Likewise, Megan Matthies with the City of Chestermere said nothing was in the works there, either. Karin Hunter, president of the Springbank Community Association, and Chrissy Craig, chair of the Langdon Community Association, confirmed they were unaware of other events going on in their communities. Regardless of where you ring in the New Year, Airdrie RCMP reminds all residents to celebrate responsibly. "We want people to enjoy their holiday and their Christmas season; we also want them to be safe, as part of that," Cst. Jarom Leafloor said. "Our responsibility is to investigate and deter impaired driving, and we'll be out there using our tools to do that this holiday season."