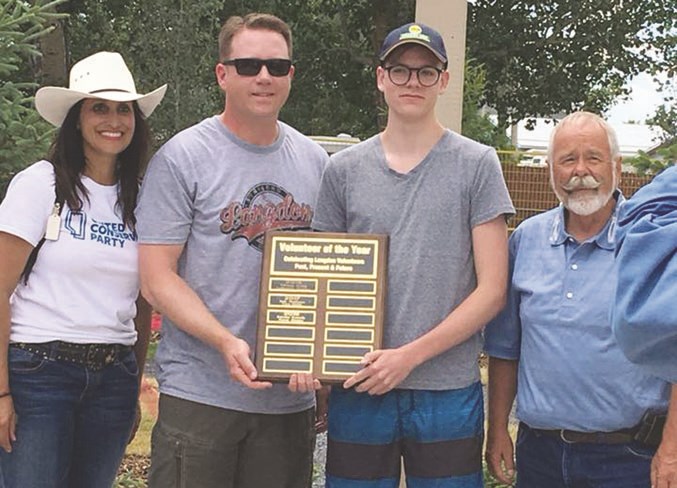 Brendan Connolly (second from left) and Patrick Golden (second from right) were the winners of the 2018 Langdon Volunteer of the Year awards. They were presented with their awards July 21 during Langdon Days.

A pair of very deserving volunteers received awards during Langdon Days, held July 20 to 22. According to Langdon Volunteer of the Year Awards Co-ordinator Lisa Baker, the program began in 2016 to “recognize and celebrate the strong volunteer culture in Langdon.” The Langdon Community Association presents the awards annually, accepting nominations from residents in two age categories – youth and adult. This year’s adult Volunteer of the Year award went to Brendan Connolly. Connolly was honoured for his contribution to the hamlet’s little league programs, as well as his work with the North Bow Community Facility Board and Fundraising Committee. “We’re working on a project to bring a quad baseball diamond and [recreation] centre to Langdon,” he said. “Phase 1 right now is the quad baseball diamond, which is why I’m also heavily involved in that board, as well as their fundraising committee.” Connolly said he grew up playing fastball and is now president of the Langdon Little League. He also coaches a number of teams, including the Minor AA Strikers, the Minor house league team and the Indus Hurricanes Atom B team. “I was a little surprised at first, just because there’s so many volunteers I work with in Langdon. It was special to be singled out among those,” he said. “It was exciting. You do a lot of work and a lot of times you’re not doing it for recognition, but it’s nice to be singled out and recognized for a lot of the hard work.” Patrick Golden was this year’s winner in the youth category, presented to an individual 18 years of age or younger. Golden volunteers with Synergy in Chestermere, First Alliance Church in Calgary and Langdon Days. Golden said he was “mostly confused” when he learned he had won the award. “I knew I was helping, but I didn’t think I was worth the nomination for the award,” he said. “I was very grateful to be nominated.” The 17-year-old graduated from Chestermere High School in June and will attend Calgary's Alberta College of Art and Design in September, studying digital arts. He said he hopes to pursue a career as an animator. Golden has volunteered with Synergy’s Homework Helpers program, assisting students with their schoolwork. Terry Gill, program co-ordinator at Synergy, said Golden is a great role model for his younger brothers, and for the kids he interacts with at the organization. “He’ll hug his brothers, and for a male, that’s not always common – to show that kind of affection,” Gill said. “He doesn’t tell other people to do stuff, he encourages them to help out. It’s literally leading by example and showing the younger generation how to be a great volunteer and a great role model.”