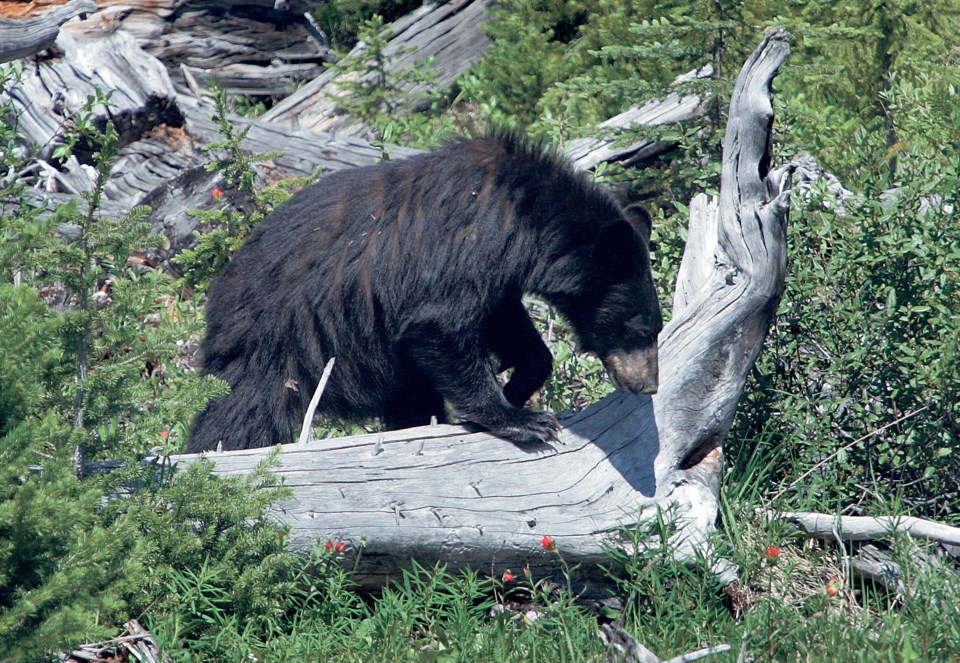 The death toll for black bears on roads and the railway line in Banff National Park continues to rise.

A black bear was hit and killed by a train west of Castle Junction near Storm Mountain lookout at about 2:15 p.m. Aug. 25. The force of the strike flung the bruin into the Bow River.

"The bear floated down from where it was struck almost three kilometres before it ended up in a location near the river’s edge where staff could reach it and remove it from the river," said Jon Stuart-Smith, a human-wildlife management specialist for Lake Louise, Yoho and Kootenay.

"There was no grain or other attractant on the tracks so it seems like the bear was just travelling."

This most recent death follows on the heels of five other human-caused black bear mortalities in Banff National Park, including one on the Canadian Pacific Railway and four others on the Trans-Canada Highway and Icefield Parkway.

In addition, there was a male black bear killed on Highway 93 South in Kootenay National Park. There have been no reported black bear mortalities in Yoho National Park so far this year.

On top of that, there were two bears struck by vehicles on the Lake Minnewanka Loop this month, but Parks Canada believes both bruins survived after getting up and running into the woods.

“It’s just unfortunate that there’s been a number this year,” Stuart-Smith said.

In addition, two grizzly bears have died in Banff National Park this summer.

A male grizzly was struck and killed by a semi-trailer and killed on Highway 93 South just after midnight on June 4, about one kilometre south of the Trans-Canada Highway heading up the hill toward Storm Mountain.

On June 22, Parks Canada was forced to kill an injured and emaciated female yearling grizzly cub. It’s believed a vehicle struck the bear on the highway 10 days earlier. The yearling, its sibling and mother were on the wrong side of the fence meant to keep wildlife off the highway.

Black bears primarily use the montane region in Banff National Park – 80 per cent of which lies within the Bow Valley – and that’s the area with the most human activity and development in addition to more than four million visitors a year.

Black bears are thought to be more resilient to human-caused mortality than many other carnivores due to higher birth rates, including a younger age of first reproduction than grizzlies, higher population densities and a greater overall tolerance to human disturbance.