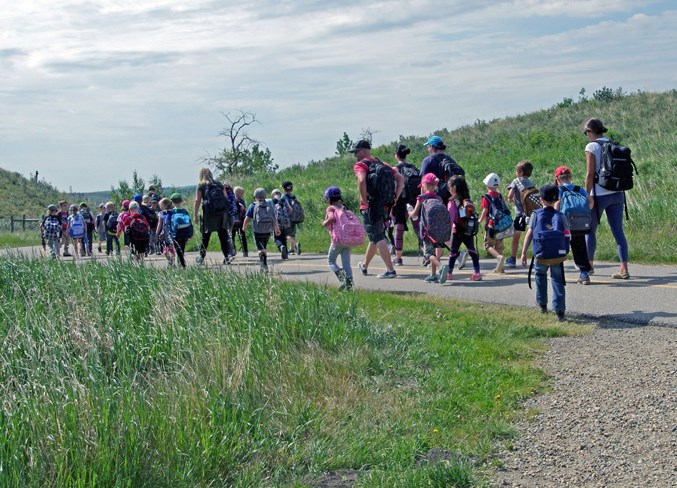 Glenbow Ranch Provincial Park enjoyed a busy, highlight-filled summer, according to Executive Director of the Glenbow Ranch Park Foundation (GRPF) Sarah Parker. “It was certainly busy at the park, and word of mouth from regulars was…the parking lot was packed much earlier,” she said. This summer, Parker said, Glenbow Ranch took full advantage of its recently-opened visitor centre, which was under construction last season. According to Parker, volunteers tracked more than 200 visitors per weekend at the new facility, which she said doesn’t account for visitors that might have bypassed the centre during their stay. She estimated attendance at the park throughout the summer months surpassed last year’s, and added she was surprised at the number of international guests who visited Glenbow Ranch – including travelers from Scotland, Thailand, New Zealand and Mallorca. “A lot of them were being brought by Cochrane and Calgary-area residents who wanted to show the park to their visitors, which is a testament to how much people love the park,” Parker said. According to Parker, international guests benefitted from a new offering at the park – translated tours. Volunteers were trained to give the park’s signature Best of Glenbow golf-cart tours in Tagalog, Punjabi, Arabic, Spanish and French, she said. Parker added the free translated tours – presented in partnership with Cochrane Family Services, Rocky View County Immigrant Services and the Calgary Foundation – were a huge success. “They were all really well attended,” she said. “People loved being able to bring out their grandmas, their grandpas, their family to learn about the history and ecology of the park in their own languages.” Nearly all the volunteer tour guides expressed an interest in leading the translated tours again next year, Parker said, and added she hopes to expand the program to include additional languages with large populations of speakers in the Calgary area. The park’s school field-trip programs, offered at the beginning of the summer as school was letting out, were another standout, according to Parker. Students took part in the Discover Grasslands program – reinvigorated through a partnership with Alberta Beef Producers – Discover Archeology program and Explore Ponds program. “In the end of May and June alone, we had more than 700 kids to the park to take part in those field-trip programs,” she said. “There was definitely a buzz in the park, with all those kids learning and really taking on this hands-on, experiential learning which we offered.” Parker added the foundation’s Park Talk series, regular golf-cart tours and a partnership with Wildlife Preservation Canada to identify bumblebees (see our story here) were other highlights of the summer. As the weather cools, she said, GRPF will offer golf-cart tours well into September, and the Park Talk series will continue throughout the year. The foundation hopes to have the visitor centre open as often as possible for the rest of the year, Parker added, as long as weather permits. More information about what’s happening at the parks is available by signing up for GRPF’s newsletter or by visiting grpf.ca