UPDATE: Calgary golfer Reef Caulder rescued the seven-year-old after he was swept half a kilometre downstream.
Jun 29, 2020 10:00 AM By: Tammy Rollie 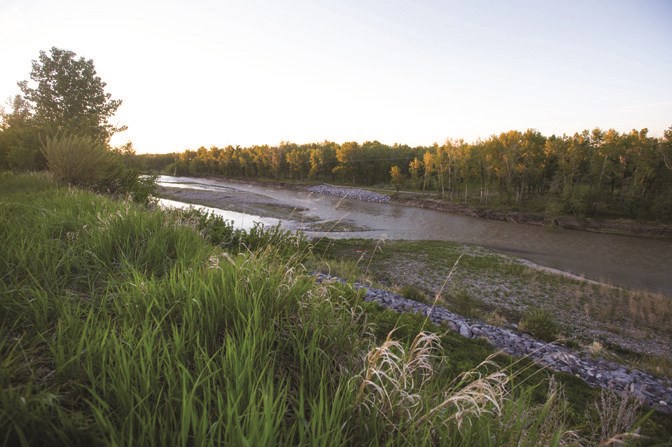 A Calgary man came to the rescue of a seven-year-old Langdon boy who was swept away yesterday while tubing in the Sheep River in Okotoks.

Reef Caulder said he was golfing at River's Edge Golf Club the afternoon of June 26 when he heard people screaming for help.

Caulder, who had been golfing in the Calgary Golf Association's Match play tournament and was on the seventh hole after completing his round, looked into the Sheep River and saw someone in the water several yards downstream, clinging to a rock.

Caulder said he went down the steep embankment into the river and accessed a nearby sandbar. The young boy was about 30 feet from shore in the middle of the river.

“I went into the river and picked him up out of the water - he felt like a wet noodle,” he said. “He was shivering and I could barely make sense of what he was saying.”

When Caulder got the youngster back to the sandbar, the boy threw up. Caulder put his sweater on the boy to keep him warm.

After retrieving the child’s inner tube, which was caught up on shore, Caulder piggybacked the youngster back to the embankment. A firefighter from the Okotoks Fire Department helped the pair up the embankment.

“I carried the boy across a part of the river to the shore where the guy was waiting,” he said. “He said, ‘Wait, I will come to you,’ but the water was only up to my waist so I carried the boy to him.”

Caulder then carried the boy to the clubhouse.

RCMP Media Relations Cpl. Teri-Ann Bakker said a family member of the boy had also attempted to rescue him when he was swept away, but was unsuccessful.

The boy had travelled about half a kilometre downstream before he was rescued.

Bakker said an RCMP officer and municipal enforcement officer, with help from a Calgary Search and Rescue member who was camping nearby, crossed the fast-moving river further downstream with floatation devices, but the devices were unable to reach the pair.

"The RCMP officer was able to keep an eye on the seven-year-old and civilian male who was able to assist the boy to the sand berm and provided radio communication to the Okotoks Fire Department," she said, adding the department had been preparing to launch a boat to assist with the rescue.

Bakker said the child and woman who initially attempted to rescue the boy were assessed and transported by ground ambulance to hospital, and have since been released. It’s not believed the boy suffered from hypothermia.

“It was a very well done job by the RCMP and municipal enforcement officers to be able to respond that quickly and appreciating the civilian that responded so quickly to aid in the rescue of the seven-year-old boy in order for him to be successfully saved,” she said. “Everyone worked well together.”

Okotoks RCMP are advising the public to stay away from the Sheep River due to the fast-moving water, which is still very cold.

“We also don’t want to encourage civilians to jump into the water to rescue people,” she said.

About the Author: Tammy Rollie

Tammy Rollie is a staff reporter at OkotoksToday.ca and the Western Wheel newspaper, focusing on Wheel's West, local arts and culture and entertainment. For story tips contact trollie@okotoks.greatwest.ca
Read more