Rocky View County (RVC) Division 5 Coun. Jerry Gautreau has departed a staff position he held for a brief period with a municipality in Manitoba.

Scott Strasser
Dec 21, 2020 1:00 PM
Previous Next
1 / 1 Division 5 Coun. Jerry Gautreau has resigned from a position he held with a municipality in Manitoba. File Photo/Rocky View Weekly.
Expand
Previous Next

Rocky View County (RVC) Division 5 Coun. Jerry Gautreau has departed a staff position he held for a brief period with a municipality in Manitoba.

On Dec. 3, the Town of Swan River, Man., issued a press release announcing the hire of Gautreau as the municipality’s new Chief Administrative Officer (CAO). The release highlighted Gautreau’s work as a RVC board member, as well as a member of the Calgary Metropolitan Region Board, and included a welcome message from the municipality's mayor.

“Mr. Gautreau is looking forward to relocating to Swan River with his family and becoming involved in the community,” the release stated.

When reached Dec. 16, Gautreau said the position in Manitoba was short-term and that he intended to return to Alberta in a few weeks.

“I’m out here helping a municipality get back on track – it’s very temporary,” he said. 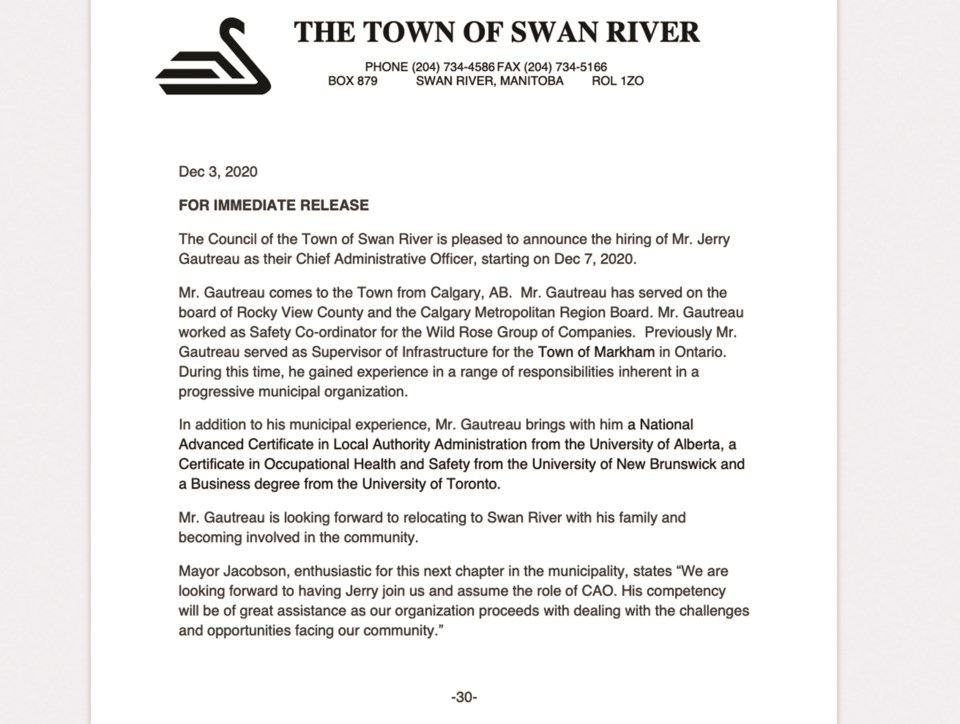 “I actually do a lot of reports for other municipalities as well when they run into trouble, through my background. The opportunity here came up, they needed help and I’m here. I don’t need to go into detail about other municipalities, who I’ve helped out in the past or not.”

Contradicting Gautreau's assertion that the role was temporary, Swan River Mayor Lance Jacobson said he was under the impression the appointment was permanent.

"Mr. Gautreau has been hired by the Town of Swan River to be our CAO," Jacobson said Dec. 17. "I don't know if there's some misinterpretation or any misunderstanding with the question given to Mr. Gautreau, but all I can say is the Town has an agreement with Mr. Gautreau to serve as our CAO."

He added Gautreau specified he was an elected RVC representative after accepting the role in Swan River.

"When he first started, a day or two in, he and I had our first meeting and he did tell me he was a councillor," Jacobson said. "I asked him if he had resigned the position and he told me he had not yet resigned the position...which he does not have to. I suppose once he passes his probationary period he would probably remove himself from council and resign."

On Dec. 18, shortly before the Rocky View Weekly's print deadline, Gautreau said he had resigned from the CAO position in Swan River.

“I can confirm Mr. Gautreau is no longer working for the Town of Swan River,” Jacobson said Dec. 18.

According to RVC Communications and Marketing Manager Bart Goemans, Gautreau was within his rights as an elected official to accept employment in another jurisdiction.

“We can confirm there is nothing in the Municipal Government Act or County bylaws that prohibit Coun. Gautreau taking a CAO position,” he said in an email.

Prior to departing Manitoba, Gautreau said his permanent residence would remain in RVC – a requirement for councillors – while he was working for Swan River.

“Any councillor in RVC is entitled to a life, a job and whatever they need to do to make money for their family,” he said. “It doesn’t matter if I work at a McDonald's, a Tim Hortons or whatever, whether it’s in RVC, the city of Calgary or any other municipality. We’re entitled to make a living.”

He added he intended to continue attending RVC council meetings – which will be held remotely for the foreseeable future due to the COVID-19 pandemic – and was still communicating with his constituents and County colleagues via email and phone.

“As far as I’m concerned, this is my private life,” he said. “I have a job as a councillor, which, technically, if you read the councillor duties, is a part-time duty... I still work many hours as a councillor, talking to constituents and helping them with issues.

“However, we’re ultimately entitled, like any other councillor, to have a job. Most of the councillors have a job that is not being on council.”

According to RVC Reeve Daniel Henn, Gautreau informed him a few weeks before going to Swan River that he would be working out of town temporarily.

“It wasn’t a total surprise, but when I saw the [Swan River] news release I was surprised, as were a lot of people,” Henn said. “I reached out to Coun. Gautreau immediately and he said, ‘Yeah, it needed to be corrected.’ The press release put out by the Town of Swan River was incorrect.”

While he acknowledged councillors can and do hold jobs outside of council, Henn expressed concern about "councillor commitment."

“My opinion would be, if you’re going to take a job that is quite a distance away, your ability to represent your residents may come into question," he said.