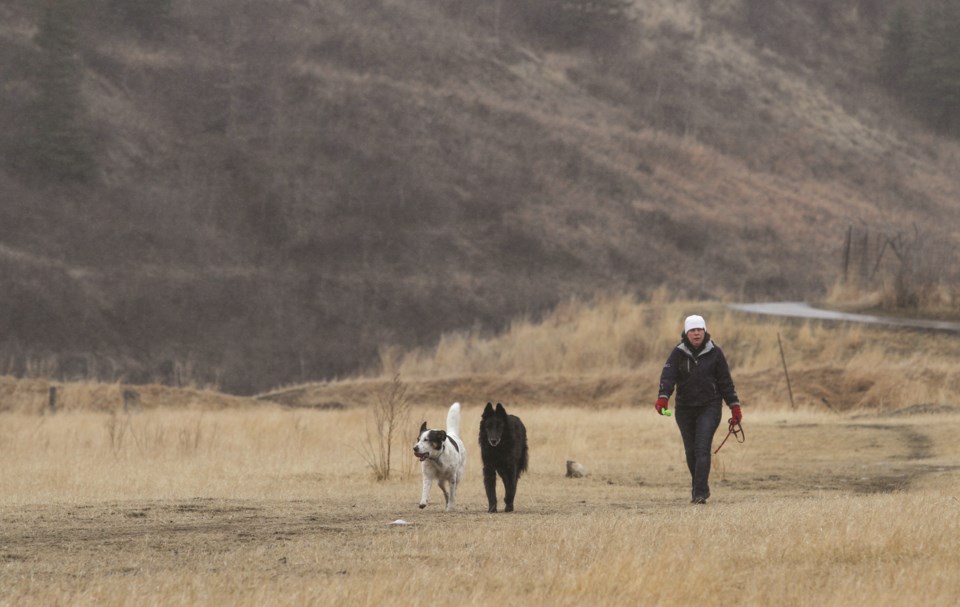 Dog owners in Langdon will soon be able to take advantage of a brand-new site to let their pups play free.

“The dog park will be the first one of its kind in the entire County,” said Greg Van Soest, parks planner with Rocky View County (RVC).

According to Van Soest, an off-leash dog park is a greatly desired amenity in the hamlet – the results of a Recreation Needs Assessment for Bow North identified it as one of the top three priorities for Langdon residents.

He noted RVC’s 2018 census identified the community as having a population of 5,364, adding there are 846 licensed dogs in the hamlet as of this month.

“There’s no formal place for dog-owners to enjoy a safe, dedicated space for their dogs to run and play,” he said.

The final design, layout and location of the dog park are still under review, Van Soest said, to be finalized in the coming months. He noted the park will be developed on County-owned land, with construction anticipated to begin during this summer.

“Using design guidelines and principles used by other municipalities, the County’s envisioned an amenity that will provide an all-seasons recreational opportunity for the community to safely enjoy,” Van Soest said. “The form and function of the off-leash dog park will be comparable to those found in most communities.”

The site will be fully enclosed, he said, with separate spaces for large and small dogs. It will also include fenced-off entrance vestibules for leashing and unleashing dogs, and multiple dog-waste bag dispensers and waste receptacles throughout the park.

The project is estimated to cost around $40,000 for design and construction, Van Soest said – and during the adoption of the 2020 base budget at RVC council’s Dec. 10 meeting, a budget adjustment for the project was approved.

“The approval for the funding of the park further demonstrates the County’s commitment to enhancing the quality of life for our residents,” Van Soest said. “I can’t overemphasize that enough. It’s something that, the community has spoken, and we heard and we listened and we’re responding.”

The opening of an off-leash dog park offers several benefits to Langdon, Van Soest said. For dogs and their owners, it provides an anchor to enjoy the outdoors and socialize.

“Another advantage, too, is that it puts the dogs into a dedicated location, so there’s not a lot of random use of less ideal locations for residents to run their dogs off-leash, resulting in some unwanted greetings between dogs and people,” he said. “It also reduces the errant waste that results from dogs that often are picked up by the pet owner, but sometimes, they are missed.”

While there are currently no other off-leash dog park projects being contemplated within the municipality, Van Soest said the County is working on establishing design guidelines and site-selection standards for when the time comes to introduce this type of amenity elsewhere.