A new farmers’ market is coming to East Balzac, as Prairie Horizon Fresh Market announced it will open at New Horizon Mall (NHM) later this summer. Airdonians Ken Aylesworth and his wife Tracy will run the enterprise.
0
Apr 16, 2019 12:01 AM By: Scott Strasser 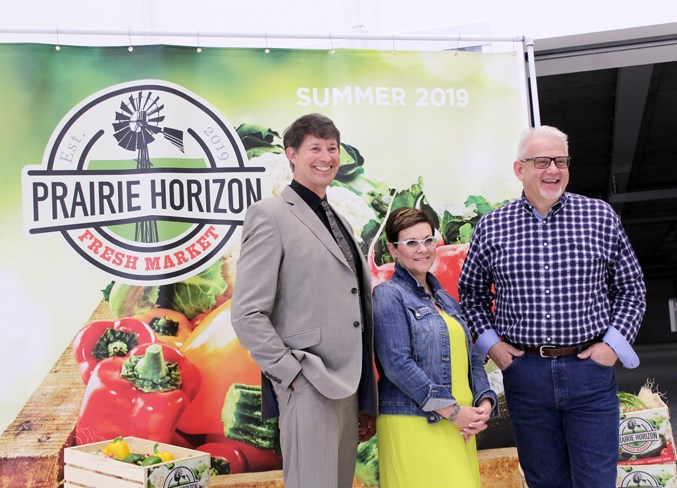 A new farmers’ market is coming to East Balzac, as Prairie Horizon Fresh Market announced it will open at New Horizon Mall (NHM) later this summer.

Airdonians Ken Aylesworth and his wife Tracy will run the enterprise. The Aylesworths bring 15 years of experience in the farmers’ market industry in Calgary, having previously managed the Avenida Food Hall and Fresh Market and the Symons Valley Ranch Farmers Market.

“We've had the good fortune to be involved in another number of other markets in the city and today is a very exciting day for New Horizon Mall and for Prairie Horizon Fresh Market,” said Aylesworth at an official announcement April 11 at NHM.

“We're excited to be a part of helping make this a lively destination and place to come.”

The market will feature 40-plus vendors, according to Aylesworth, and will operate out of a 23,000-square-foot space on the mall’s main floor. While the vendors have yet to be named, he said the focus will be on fresh produce, while also offering international options such as Mexican and Indian foods, and pierogis.

“We see what markets do for the community,” Aylesworth said. “They become a gathering place and they become an activity center for the young and old alike.”

He said there is a “definite void” in the region for a year-round farmers’ market. In 2017, the Symons Valley Ranch Farmers Market was devastated by fire, leading to the loss of the only year-round, indoor farmers’ market in north Calgary and area.

“We hear it all the time ­– 'Why don't you have something in the northwest?’” he said. “Calgary has enough people to support more markets and the customers are definitely asking for and requiring this type of product and experience.”

While farmers’ market patrons will certainly enjoy Prairie Horizon, the announcement is also positive for the mall.

According to NHM General Manager Scott Smith, Prairie Horizons will be the mall’s second anchor tenant, alongside the Best Shop, which he likened to a “Chinese Walmart.”

“Anytime you can announce an anchor tenant, it's big news,” he said. “We know there's going to be good traffic driven by a farmers’ market, and all of the tenants can benefit from having this here.”

NHM opened in May 2018. Running under a model in which retail units are bought rather than leased, the $200-million, 230,000-square-foot, Asian-themed shopping centre has experienced slow growth during its first year of operation, with only a portion of its 500 available units occupied.

According to Smith, there are currently 74 open stores at NHM, with another 28 expected to open in the coming weeks. With the announcement of two anchor tenants, he said the mall is starting to see positive momentum.

“We're expecting things to really build off of the announcement of our two anchor tenants,” he said.

Aylesworth said he expects Prairie Horizons to not only bring customers to the mall, but also generate interest from other potential entrepreneurs who could set up shop at NHM.

“Farmers’ markets are wonderful breeding grounds as an incubator for small business,” he said. “So is this incredible facility here, so people that want to take a try at being an entrepreneur, this is a great place to come and look at what can be done.”