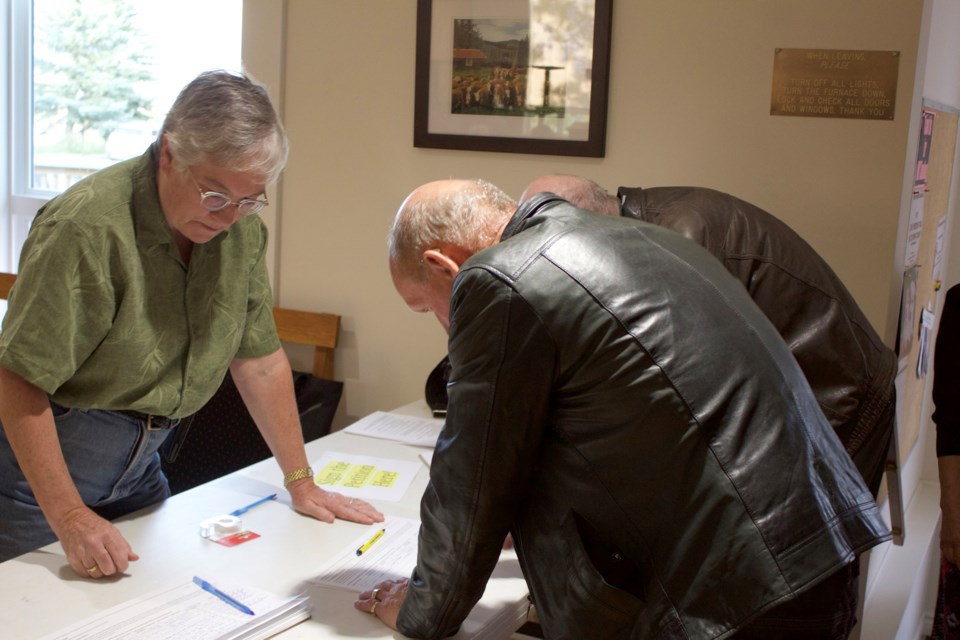 Janet Ballantyne (left) says volunteers continue to collect signatures on a petition requesting a Municipal Affairs inspection of Rocky View County. The petition must have 8,000 signatures and be filed by Nov. 15. File Photo/Rocky View Publishing

The deadline for concerned Rocky View County (RVC) residents to submit a petition to Municipal Affairs (MA) is looming, and volunteers continue to work hard to collect the necessary number of signatures.

“It’s hard, collecting all the signatures, but we’ve got some pretty dedicated volunteers who’ve been out knocking on doors in all kinds of weather,” said organizer Janet Ballantyne.

The petition, which requests Alberta’s Minister of Municipal Affairs undertake an inspection “of the management, administration and operation” of the County – including the decision-making practices and conduct of RVC council, the advice of the Chief Administrative Officer and “the extent to which the toxic environment that exists within council and administration is resulting in a failure to consider the welfare and interests of County residents” – was launched in late September.

“We’re basically asking for an inspection,” Ballantyne said. “If there’s nothing wrong, then the province will tell us that there is nothing wrong.”

While the sanctioning of Couns. Crystal Kissel, Kevin Hanson and Samanntha Wright was the inciting incident for the petition, Ballantyne maintains “it’s nowhere near the only reason why we feel there should be an inspection in the County.”

“There are very many decisions the council has been making over the last while that are very questionable,” she said.

Ballantyne cited the creation of a new Municipal Development Plan as an example, and rockyviewsos.com, a website dedicated to the petition, further lists decisions on gravel policy, a voters’ list and the Firearms Bylaw as “broken promises.”

The petition must be submitted by Nov. 15 – among other strict requirements for these types of petitions, no one can sign more than 60 days before it is filed.

MA requires petitions for an inspection to be signed by at least 20 per cent of the population, and all signatories must be electors – defined as “a person who is eligible to vote in an election.” In RVC, this amounts to approximately 8,000 people.

The Municipal Government Act (MGA) further requires each signature be witnessed by an adult. The witness must place their signature beside that of each petitioner, and they must also take an affidavit that, to their best knowledge, the signatures they’ve witnessed belong to people entitled to sign the petition.

“Quite honestly, I don’t know whether we will get the 20 per cent of the signatures,” Ballantyne said. “I think it’s going to be difficult. I’m hopeful that we can get there.”

Ballantyne said she’s lost track of the number of volunteers knocking on doors and collecting signatures. Several retail locations around the County, including the Bottrel General Store, The Heart of Bragg Creek and Langdon Firehouse Bar & Grill have copies of the petition available to be signed.

“What we have found the biggest challenge in the petition has been actually finding people at home and reaching people,” she said.

When volunteers do find people at home, Ballantyne said, they are generally well received and people are often happy to sign. Many, she added, haven’t heard of the petition.

Ballantyne said she did not know exactly how many people had signed, but said it was a large number. Right now, she said, organizers are in the process of “trying to haul in all the petitions from all the volunteers that we have out.”

“We ask people for updates, and we get updates from some of them, and then we don’t get updates from others and we think, ‘Oh, well, write that person off, they’re not really doing anything,’” she said. “And then they’ll call three days later and say, ‘I have 85 signatures for you, I forgot to tell you.’”

Ballantyne said there has been “active opposition from people in positions of authority,” which she said she hadn’t anticipated and doesn’t feel is appropriate. As an example, she pointed to “disparaging” posts by Coun. Jerry Gautreau on the Facebook page Rocky View County Connect, accusing the owner of the page of spreading “half truths,” “untruths” and “lies.”

Gautreau did not respond to a request for comment.

She added she felt a recent FAQ released by the County was also “unambiguously designed to undermine messages that some of our volunteers were delivering at the door.”

Reeve Greg Boehlke said the FAQ was completely based on documented facts, and added he didn't feel there was grounds for the petition, "but, it is a democratic process, and I support democracy completely. I would never try to take that right away from anyone."

"I don't have a lot of comment on [the petition]," he said. "People have the right to certainly ask for a petition or to try to get people to sign a petition.... I'd say people should really research and be aware of what they're signing and why they're signing it."

A FundRazr page has also been created to help Wright, Hanson and Kissel pay legal fees associated with an upcoming court battle over the sanctions. As of Nov. 7, 86 contributors had donated just more than $18,000 – approximately 18 per cent of a $100,000 goal. Ballantyne said she could not comment on the fundraiser, as she has not been personally involved with it.

According to Timothy Gerwing with MA, nothing in the MGA addresses this fundraising, as, “in this case, the councillors are acting as private citizens.”