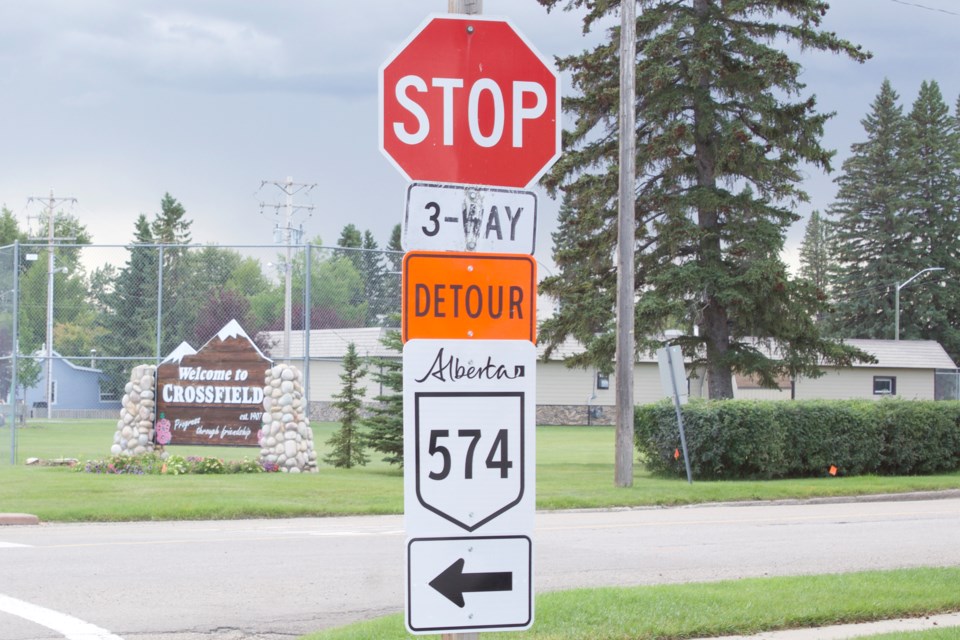 A deep utility replacement project on Limit Avenue in Crossfield will force traffic in the town to take alternate routes for the remainder of the summer. Photo by Ben Sherick/Rocky View Publishing

Drivers and residents in Crossfield may experience disruptions in the coming months as the town undertakes a deep utility replacement project on Limit Avenue.

According to Mustafa Hashimi, director of Infrastructure with the Town of Crossfield, the project will see the installation of new sewer line underneath the road.

“We noticed that some of them had cracks,” he said. “Most of these sewer lines are 50-plus years old – with age comes deterioration.”

Hashimi said the Town recently inspected all sewer lines within the municipality using specialized cameras, and compiled a list of lines that need immediate replacement.

“If not [replaced], they could collapse and cause major backups,” he said. “On the list was Limit Avenue, as well as Railway Street. Those were some of our top priorities.”

The project has been broken into four phases, Hashimi said, “to minimize the impact on residents.” The first phase began Aug. 13, resulting in the closure of Limit Avenue in both directions between Railway Street and Ross Street. Hashimi said phase one is expected to be completed Aug. 26, barring delays.

“During the duration of all phases, [drivers will] have to navigate around the construction, because it is an open trench,” he said.

Throughout the project, motorists can expect to be rerouted in Crossfield. Hashimi said traffic accommodations will be established.

“What we’re finalizing with [Alberta Transportation] is having two separate routes – one route will be for heavy-duty traffic, so all your trucks and everything…will have their own route, and residents will have an alternative route,” he said.

Temporary utilities will be also be set up during the project, he added, but residents may also experience minor service interruptions.

“When construction’s happening and you have major components taken away, the system – when you have something temporary there – can only handle so much,” he said. “The biggest thing is, we really encourage our residents to minimize their usage, if possible.”

The town has notified all immediately-impacted properties directly, Hashimi said, and will reach out to those affected by future phases between one week and 48 hours prior to the road closure.

“Our intended goal [is] to give all residents a week’s heads up before we shut down their portion of the road,” he said. “Their notices will be hand-delivered to all of the immediate affected residents, and we will be posting it on our website, Facebook and all the other platforms that we have.”

The remaining phases will be completed later this summer – Phase Two will see Limit Avenue closed between Ross Street and Strathcona Street, Phase Three will cause a closure between Strathcona Street and Saskatchewan Street, and the final phase requires Railway Street to be closed from Limit Avenue to Mountain Avenue. Hashimi said the entire project is intended to be completed by mid-October, but added the timeline could be impacted by weather.

“Like any construction project, weather’s a portion of it,” he said. “We’re hoping to have favourable weather…[but] when we do have rain delays, we won’t have any crews on site because it’ll be almost impossible to get anything done.”

The Town appreciates the community’s patience as the project progresses, Hashimi said, and welcomes any feedback or concerns.

“Our biggest thing is, we’re here to help as much as we can, but we do need their feedback,” he said. “So, if there is something that doesn’t work, they shouldn’t hesitate to give us a call.”