“It’s easily the number one thing I hear out of that community right now— The need for help with the traffic flow and the traffic congestion."
Aug 2, 2020 5:00 PM By: Chelsea Kemp 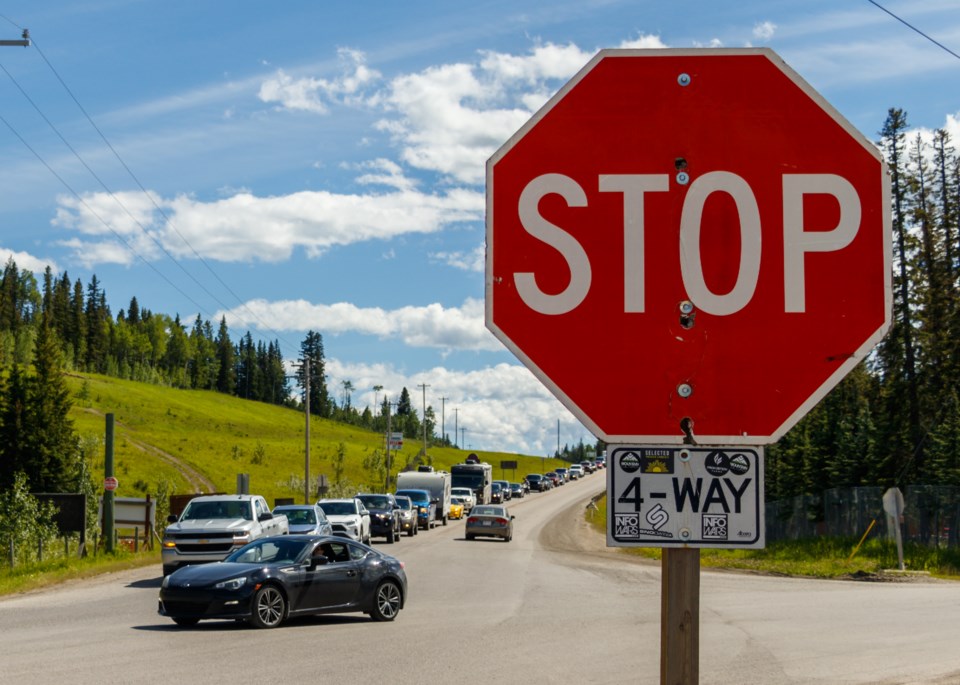 Bragg creek residents are calling on a solution for the traffic back-up at the four-way stop near the entrance to the hamlet.

Banff-Kananaskis MLA Miranda Rosin said the four-way stop, located at an intersection between Highway 22, Burnside Drive and Highway 758, has been a sore spot in the community for “as long as [she] can remember."

“It’s easily the number one thing I hear out of that community right now – the need for help with the traffic flow and the traffic congestion,” she said.

Rosin added that COVID-19 has magnified the problem because Alberta Parks and Recreation is seeing a jump in popularity after people were cooped up in quarantine during the pandemic.

“They want to get out and get some fresh air and exercise,” Rosin said.

Before the pandemic, traffic at the intersection had increased by about 359 per cent over the last decade. A significant capital upgrade is coming to the area, but it is not slated to be completed until sometime between 2023 and 2025.

“We have also heard loud and clear from residents and recreators who come to the area… that there needs to be immediate mitigation as well, and change needs to happen quickly,” Rosin said.

She said the province is exploring putting temporary traffic lights at the four-way stop during summer weekends or potentially bringing in police officers to direct traffic.

The project has been complicated, she said, because it involves three government jurisdictions – Rocky View County, Tsuut’ina First Nation and Alberta Transportation.

“I don’t think people realize quite how complex that one little piece of intersection has been,” Rosin said, adding that previous governments have tried to get the interchange project complete but have all failed.

Rosin said she is pleased that the current government has managed to work out a plan to get the upgrade for the four-way stop fully funded so it can move forward. She noted several upgrades in support of public safety have taken place in the Bragg Creek area, but they have not necessarily been in response to traffic flow mitigation.

The biggest concern is not only the effect on those trapped in traffic, but how the back up is beginning to affect the hamlet's economy.

“People wait through this line-up and suddenly all these tourists get to the intersection and whereas they may have previously gone into town to grab an ice cream or a beer or supper or lunch, they’ve already waited long enough. They just want to get through the intersection and bypass the town entirely,” Rosin said. She added that many business have seen their sales decrease as traffic increases at the intersection. “It has a negative effect on the tourism industry of Bragg Creek.”

Echoing Rosin’s concerns, Rocky View County Division 1 Councillor Mark Kamachi said he is worried the current backup of traffic at the four-way stop during weekends is impacting residents and businesses, as many avoid the area during the afternoon on Saturdays and Sundays.

“For the businesses having people come in it's great, but at the same time they could be losing business too because people don’t want to lose their space in the queue trying to get south or north,” he said.

The project to solve the traffic flow problem was made possible, Kamachi said, after Rocky View County removed its objection to the Springbank Off-Stream Reservoir. As part of that agreement, the provincial government promised to find a solution for the four-way stop before 2025.

It was a tough decision to remove the objection to the reservoir, Kamachi said, but the County was determined to find a solution for local issues, including potential flooding and traffic mitigation.

The flooding in 2013 transformed the community, forcing many mountain bikers to access trails via West Bragg Creek as opposed to Highway 66. Because of this, tourism in the hamlet has grown exponentially.

Bragg Creek is working to grow the vibrancy of the community and become a go-to tourism destination, Kamachi said, but this is being hindered by the four-way stop.

While the intersection involves multiple levels of government, Kamachi said that at the end of the day, it is an Alberta Transportation issue. They will decide what will happen to any temporary measures that are taken to help control traffic at busy times.

“That little intersection is just such a hot point,” Kamachi said.