A project to rehabilitate Cove Park in Chestermere is nearing completion, and according to Kathy Russell, parks and recreation manager with the City of Chestermere, the park should be open before the end of the month.
0
Sep 11, 2018 12:01 AM By: Ben Sherick 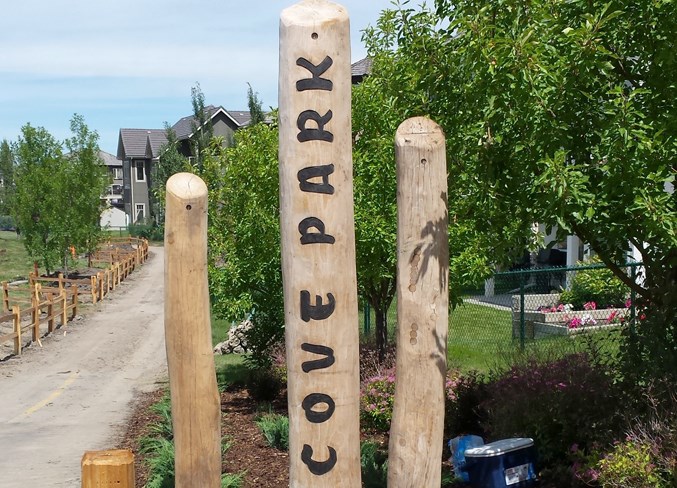 A rehabilitation project at Chestermere&#8217;s Cove Park is nearing completion after a summer of construction.

A project to rehabilitate Cove Park in Chestermere is nearing completion, and according to Kathy Russell, parks and recreation manager with the City of Chestermere, the park should be open before the end of the month. “We’re on budget, we’re on time and I think the outcome and what we’re getting, in the form of a new park, is really going to be top quality,” she said. According to Russell, the rehabilitation project was undertaken after the City saw an opportunity to improve the space. Originally built as a private park in 2006, Cove Park deteriorated over the course of several years, and the neighbourhood eventually approached the City to take over the site. The park was transferred to the City in 2011, Russell said, and the Chestermere Parks Division began maintaining the park the following year. In 2016, Russell said, the City undertook a public engagement campaign to ask residents how they felt the park should be used. Based on that feedback, according to Russell, the City worked with consultants and a contractor to create a design concept for a natural park which provides space to encourage imaginative play. “They’re kind of an emerging style of park that is really focused on connecting kids back with nature and introducing a graduated type of risk back into play,” Russell said. “Our risk-averse society, these days, has pretty much programmed out risk, but the problem with that is, it’s not as interesting or the kids don’t have the ability to manipulate or play in different ways.” According to Russell, the rehabilitation project was carried out in two phases. She said phase one began November 2017. “After Thanksgiving, the water lowers for the winter time,” Russell said. “We needed to wait for the water to be down in order to complete the shoreline work.” The first phase focused on improving the beach area by adding boulders for play, new sand and removing a beach volleyball court, she said. Phase one also addressed erosion issues at the end of an adjacent peninsula by building gabion walls and creating an access point down to the water. According to Russell, phase one was completed in the winter, and in April 2018, the City began phase two – the construction of the natural playground, as well as landscaping of the park. Russell said the City is now nearing completion of the project. “We have a few deficiencies to complete before we open the park,” she said. “The playground has been installed. We’ve done modifications to the landscaping around the playground and around the beach, and have put up the amenities like benches and tables.” Once the park is finished, an inspection of the playground structure will be completed prior to the City’s targeted soft opening date of Sept. 27. While Russell said the possibility of a grand opening hasn’t been explored, there is currently no plan for an event. “Cove Park is a neighbourhood park,” she said. “It’s not intended to be a regional, destination park. It’s small. When we looked at how people travelled to the park, I think 65 per cent of people either biked or walked to the park. We’re hoping people will continue to do that.” Until the soft opening, Russell said, fencing is still up around the park. She added while the prospect of a new park is exciting, it’s important for families to stay off the structures until after the project is complete, for safety reasons.