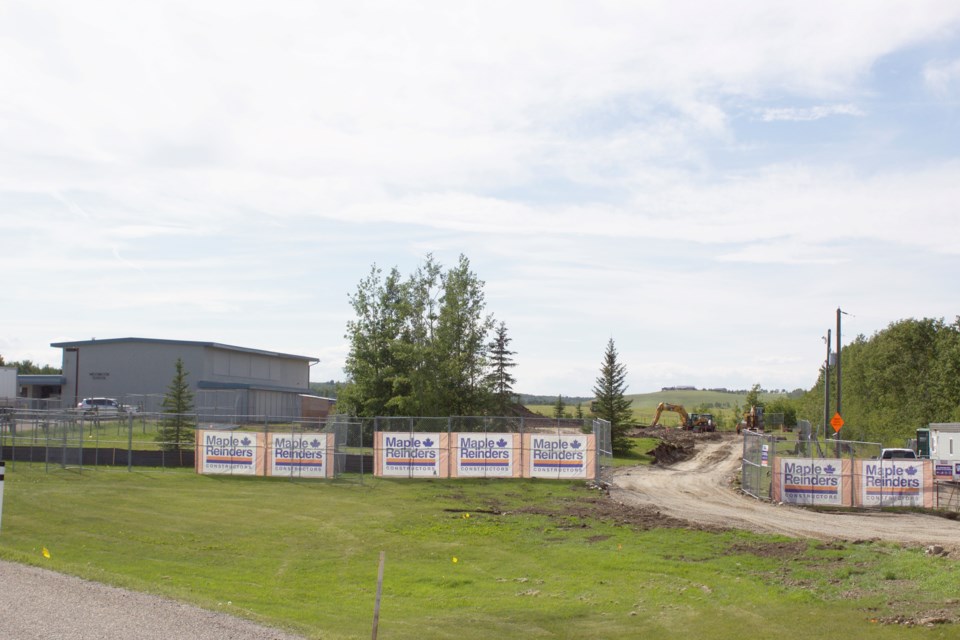 Construction fencing has been erected near Westbrook School as work on a new building got underway earlier this summer. The new building will replace the original school, which was constructed in the 1950s. Photo by Ben Sherick/Rocky View Publishing

Work on a new building to replace the current Westbrook School began earlier this summer, and Rocky View Schools (RVS) is pleased to see the long-gestating project come to fruition.

“We’re excited about this becoming a reality,” said Colette Winter, RVS’ director of Facilities Planning. “It’s been years in the making, working in partnership with the province, [Rocky View County (RVC)], the Friends of Westbrook [School Society (FWSS)] – everybody coming together to make this a reality.”

Construction of the new Westbrook School building – located just north of the original building – began at the end of July, Winter said, and crews are currently working on site preparation.

“We’re ensuring the safety of the students while the construction of the school is being built,” she said. “We are meeting bi-weekly with the principal of Westbrook School, with the architect and with the contractors to ensure safety, as well as other items regarding the construction.”

The project was initially approved by RVS’ Board of Trustees Nov. 18, 2017, and Winter said planning for the project has been ongoing since then. At the time, the Board recognized the need to replace the aging building, which Winter said was constructed in the 1950s.

“It’s a wood-frame structure, and it has shown a lot of wear,” she said.

In order to finance the new building, Winter said, RVS devised a creative solution – funding the project from the RVS Public Reserve, which is dispensed by RVC.

“The reserve fund is an account that is available when there is development that occurs in the County,” she said. “When development occurs, either land is given – up to 10 per cent, according to the [Municipal Government Act] – for municipal reserves…or it can be given as cash-in-lieu. This reserve fund amount is from the cash-in-lieu, and we have an agreement with the County a certain amount goes to the school districts.”

According to Winter, financing the project through the reserve fund allowed the school division to tend to the urgent need in Westbrook without removing other much-needed projects from RVS’ capital priority list.

“With all of the growth that we’re having here in our school district – in Airdrie, Chestermere and Cochrane – we knew that it would be difficult for the province to provide a new school in this area, because there’s always these higher growth areas in which we need schools,” she said.

“We knew that [the project] would never reach the top [of the capital priority list].”

The project was initially projected to cost $6 million dollars, according to Winter. In the ensuing years, she said, that price has increased to $7.2 million, due to rising construction costs and changes to building codes. The demolition of the current school was also factored in, contributing to the higher price tag.

During a July 23 regular meeting, RVC council unanimously approved a request for the additional $1.2 million.

RVS is collaborating with other partners on the project, Winter said. The province is providing modular units for the school, and RVC and FWSS – the school’s fundraising arm – are working together to fund an expanded gymnasium that can be used by the community.

Beside the expanded gymnasium, the school will feature a learning commons – described by Winter as “beautiful” – which faces out to the adjacent woods.

She added RVS took into account feedback received from staff, students, parents and the surrounding community when designing the building.

“Right now, Westbrook School has a long hallway, and that was very important to students, and to the feeling of a community,” she said.

The new building can accommodate 108 students, the same number as the current building, Winter said, with the option of adding modular units if attendance grows.

“I know the school is super excited and the students are very excited, about seeing the changes that are going to be happening over the year,” she said.