A stench carried by wind into Airdrie Jan. 10 bore a striking resemblance to an odour rural Rocky View County (RVC) residents east of the city say they’ve been putting up with for years.
0
Jan 22, 2019 12:01 AM By: Ben Sherick 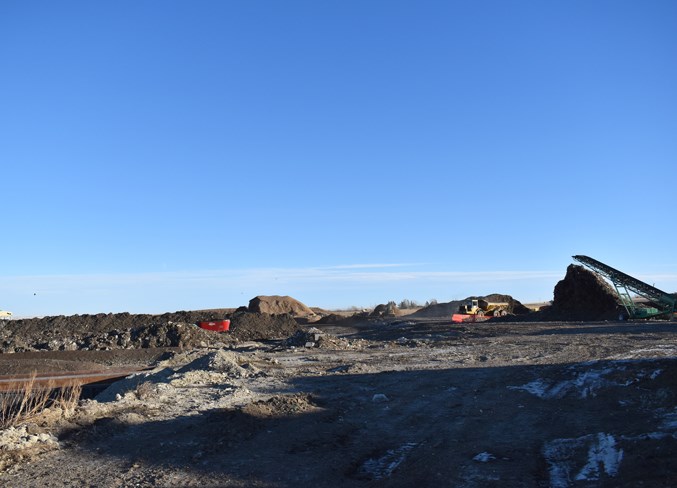 A stench carried by wind into Airdrie Jan. 10 bore a striking resemblance to an odour rural Rocky View County (RVC) residents east of the city say they’ve been putting up with for years. “My wife – who is very used to the difference between the smell of the stench versus manure – happened to be down at Walmart [in Airdrie], and she said [the stench level] was high,” said Dennis Gieck, organizer of the online petition Stop the Stench, which aims to stop the expansion of Thorlakson Nature’s Call Inc. (TNC), a compost facility located east of Airdrie that shares a site with Thorlakson Feedyards and a packaging plant for Scotts Canada. “It’s definitely a different odour than the manure smell.” TNC drew attention in December 2018, when a land redesignation application was approved by RVC council in the face of widespread opposition from neighbours concerned about the smell emitted from the site. At a public hearing Dec. 11, 2018, Gieck described the smell as a “sickening, sweet stench that you can’t stand.” The odour on Jan. 10 caught the attention of many in Airdrie, including Mayor Peter Brown. “I understand there is awful smell throughout the City. I also understand the smell is emanating from the feedlot east of the City. The City has been in contact with RVC, however, we would appreciate the community voicing their concerns, as well,” he wrote on Facebook. Although Gieck could not provide definitive evidence the smell emanated from TNC, he said, “there’s absolutely no question” in his mind it is the source. “If you drive by the property on any given day – you could go out there today and drive down the road and you will likely smell the stench,” he said. “If there’s any kind of a west wind at all, you will smell it as you pass the composting facility. You drive a little further and you get on the feedlot side, there’ll still be a really high odour, but it will be completely different.” TNC did claim partial responsibility for the smell on Jan. 10. “We feel that we probably did contribute some to the odour, but not 100 per cent,” said General Manager Milton Scott. “We base that on the fact that, if you look on Facebook, at one point there was odour in all four corners of the City, which would not support any prevailing wind.” According to Scott, TNC was working on a windrow at the time that was generating “some odour,” but ceased work immediately after receiving complaints. Scott said when TNC receives an odour complaint, it tries to substantiate whether the grievance is a real concern. “We have followed up in several locations as reports have come in, and drove out there – myself and other people,” he said. “If we can’t find odour, than we carry on doing whatever.” In cases such as Jan. 10, TNC will stop working on the row immediately. “Compost itself, in a perfect world, has very little odour – we’ll never get to zero odour – until such time as you have a row that goes anaerobic,” Scott said. “We have a couple rows right now that we’re adding wood chips to. That was one of them.” Scott said TNC received very few complaint calls Jan. 10, estimating the number at four. He added Alberta Environment and Parks (AEP) arrived on the scene and was unable to detect an odour. AEP did not respond to a request for comment by press time. To counter claims TNC sees as inaccurate, Strategic Manager Lindsey Cybulskie said the company decided to engage the community through an open house, which took place Jan. 18 from 10 a.m. to 4 p.m. (after press time). “We wanted to have it as closely as we could to this incident, so that people can come out and smell the facility for themselves,” Cybulskie said. “We’re also opening up for tours, so if anybody is interested in having a tour of the facility on their own, they can smell the compost pad and see it for themselves, they can contact us.” Tours can be arranged by calling 403-948-5434 or emailing lindsey@tfyinc.com “The big thing we want to get through to people is the comfort that we’re not trying to hide anything,” Scott said. Cybulskie emphasized TNC is open to public feedback, and will gladly accept calls from those concerned about the operation. “One of the problems we’re having is odour is a very subjective measurement,” Scott said. “What you might find offensive, the next person won’t.” Gieck agreed odour is subjective, but maintained guidelines should be in place to clearly outline what constitutes an offensive smell. He remains concerned odour problems will continue until TNC faces stricter regulations. During the Dec. 11, 2018 public hearing, RVC council amended TNC’s land redesignation bylaw, naming itself the Development Authority and empowering it to decide on any development permits for the site. Council also made allowances to limit the term of development permits to one year, with the possibility of a three-year term renewal if the site was meeting the permit conditions and had no active Bylaw Enforcement orders. Council also required TNC provide an air quality and odour assessment, and an air quality management system prior to future development permits being granted. Even so, Gieck felt council’s bylaw did not sufficiently address the problem. “[The amendments] kind of look good, but when you look at them, there’s no teeth in them and it’s just kicking the can down the road. It’s really disappointing,” he said.