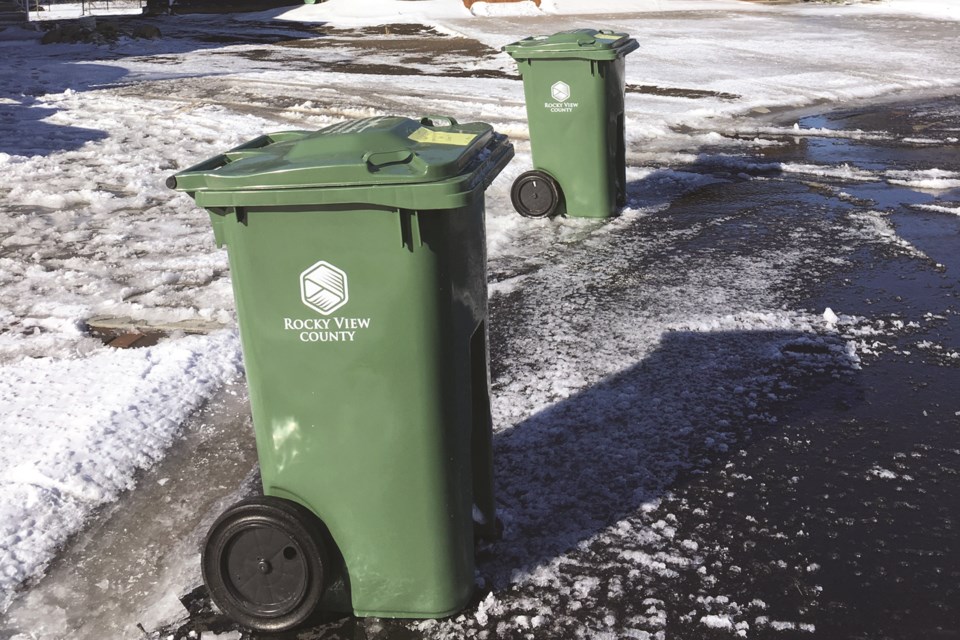 Among other waste and recycling issues faced by the region, the closure of two compost processing operations has put a strain on diversion programs offered by Rocky View County and its neighbours. File Photo/Rocky View Publishing

A dearth of compost processing facilities has put a strain on waste-diversion programs by Rocky View County (RVC) and its neighbours, according to the County’s lead solid waste advisor.

During a report presented at council’s Sept. 24 meeting, Jennifer Koole said compost processing is just one of the significant issues Southern Alberta faces relating to recycling and solid waste.

“Challenges are ever-present in the world of municipal waste and recycling,” she wrote. “Issues about where materials can go for processing, making sure that processing facilities are operating properly and determining who is responsible for the end-of-life material management are current topics of regional significance.”

According to Koole, two compost facilities in the region have recently had to stop accepting raw material due to public nuisance and permitting issues, causing difficulties for waste diversion programs in RVC and elsewhere.

Due to the closures, she said, organics from Langdon’s curbside recycling program are being shipped to a facility in Olds. This has resulted in increased processing costs.

“We are seeing prices are almost doubling for processing,” Koole said.

In order to address the issue, a subgroup of the Southern Municipal Waste Managers Advisory Committee (SMWMAC) – comprising RVC along with Cochrane, Canmore, Banff, Airdrie and Calgary – has been formed to identify concerns related to organics processing in Southern Alberta and to determine requirements for the establishment of new or expanded organics processing facilities.

“This group may be going out to seek expressions of interest to undertake necessary studies to find a logistically efficient – meaning close – cost-effective and environmentally-sustainable approach to ensure access to properly-managed organics processing facilities,” Koole said.

In her report, she highlighted two other regionally-significant waste and recycling topics.

Municipalities in the region, including RVC, have concerns about commercial waste storage sites, Koole said. Issues have been raised about their unsightliness, the risk of public danger – like fires – and potential environmental damage.

“These types of businesses do not require provincial environmental approvals to operate,” she said. “As such, they fall under municipal jurisdiction to ensure they’re operating in accordance with local development permits, nuisance bylaws and the Fire Code.”

The City of Calgary is currently engaging Alberta Environment and Parks, regional partners and industry stakeholders on the issue, Koole said, and has invited RVC to discuss common problems and possible solutions related to waste-storage sites.

A third topic of importance focuses on EPR, which Koole said is, “an environmental policy where a producer’s responsibility for a product is extended to the post-consumer stage of its lifecycle.”

Currently, Alberta is the only province in western Canada that does not have such a program – the implementation of which, Koole said, would benefit the province by $63 million annually. Research in 2016 showed that producers contributed more than $367 million to fund paper and packaging recycling across Canada. Alberta received zero dollars.

“The Alberta Urban Municipalities Association and its members are advocating that Alberta implement legislation to establish an EPR program for paper and packaging materials,” she said. “To support this effort, a collaborative EPR study is underway to detail the current state of recycling in Alberta.”

RVC has, and continues to, supply data to support the study, she added.

“We wanted to bring awareness to these three topics so [council] may have familiarity should they be discussed with [RVC’s] regional counterparts,” she said.

At this point, it is too early to tell what impact these issues have on residents, Koole said - the implementation of an EPR program could shift costs away from individuals, while issues with compost processing could shift costs onto residents. For now, she said, RVC continues to actively participate with it partners to address the issues.