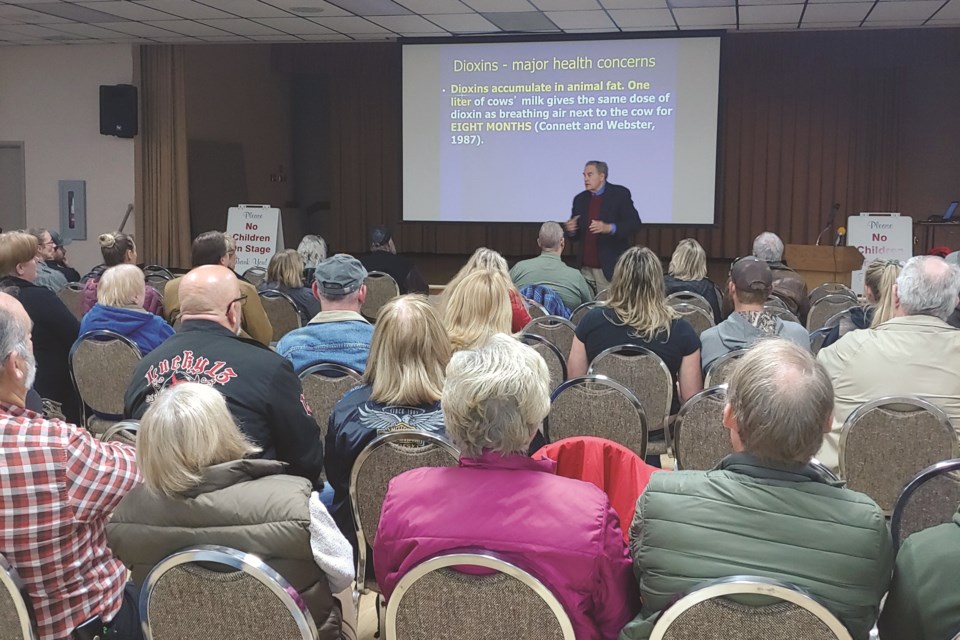 Dr. Paul Connett was invited by concerned residents of Beiseker to give a presentation against a proposed medical waste incinerator in the village. Photo Submitted/For Rocky View Weekly

Approximately 80 people showed up to Beiseker Community Hall to hear a presentation by Dr. Paul Connett, a retired professor specializing in environmental chemistry and toxicology. Connett said he’s been fighting incinerators and promoting zero-waste strategies since 1985.

“Most of my work involves communicating the complicated science of incineration to lay audiences…and also talking about the alternatives,” he said.

“He’s a third party. He has absolutely nothing to benefit from any of this,” said Rhoda Heighton, a concerned resident who helped organize the presentation. “Whereas if it’s the community or village council or the company that’s wanting to build this proposed plant…everybody has an interest.”

In 2015, Connett was brought in by residents of Ryley, Alta., when a similar facility by the same company, G-M Pearson, was proposed but ultimately refused in that community.

The proposed incinerator would dispose of approximately 8,000 tonnes of biomedical and other non-hazardous waste per year, according to G-M Pearson’s website for the Beiseker project, gmpearson-facts.ca. However, residents have several concerns, particularly regarding the impact of dioxins and furans on residents, livestock and crops.

According to Health Canada, “dioxins and furans are common names for toxic chemicals that are found in very small amounts in the environment, including air, water and soil.” Exposure to dioxins and furans has a wide range of adverse effects in laboratory animals and humans, the document said, including skin disorders, liver problems and certain types of cancer.

It is complicated to control dioxin emissions from incinerators like the one proposed in Beiseker, Connett said, and he furthered argued the facility’s suggested location – in close proximity to agricultural land – would lead to buildups of dioxins in the food chain, as the particles are consumed by grazing animals.

“If you wanted to maximize the capture of dioxins from this incinerator in the food chain, you’ve got the ideal location,” he said.

Mike Fournier, project manager with G-M Pearson declined to comment directly on Connett's presentation, but said the company's "research and study via peer-reviewed research on this type of incinerator, with the specific flue-gas treatment emission control system that we propose to use indicates that this is safe for the community, both on a daily basis [and] cumulative basis."

"There's a process here relative to human health risk assessment that's part of the permitting development of the project that will happen if the zoning happens," he added. "We're confident of the outcome of that."

Fournier said G-M Pearson has heard residents' concerns about dioxin emissions, and the company is doing additional research to to find "credible, peer-reviewed research" on the isse that it will post on the project's website.

Connett said the other key issue is trust, and he contended G-M Pearson’s track record does not inspire trust. Residents point to a now-shuttered facility the company had operated in Wainwright, Alta., which exceeded emission standards and was once the site of a fire.

“My biggest concern with this generator is the company that is building it,” Heighton said. “They have a horrible track record.”

On its website, G-M Pearson has acknowledged “there are a number of learnings from Wainwright with respect to the design and operation of the facility that can be applied to Beiseker.”

Fournier added he felt G-M Pearson has been "open and transparent" about its track record, and will continue to answer and clarify questions and concerns residents have.

At a public hearing Oct. 15, Beiseker Village council voted unanimously to table the application until its Nov. 12 meeting to gather additional information from Alberta Health Services and Alberta Environment and Parks.

Heighton said she hopes the application is refused. In the meantime, residents will continue to work to oppose the facility. A group met Nov. 3 to plan its strategy.

“We are not going to stop until we stop it, and our hope is that it is a ‘no’ vote,” she said.

She added she also expects Connett’s presentation will spur action from residents in Irricana or Rocky View County that may be impacted by the facility, as well.

According to Heighton, members of Village council and representatives of G-M Pearson were invited to attend the presentation, but were not present for the session.

“I understand, with council, they need to be impartial at this point,” she said. “Yes, it would be nice if they were there, but I also understand they need to remain impartial.”

Mayor Warren Wise did not respond to a request for comment.