As 2019 begins, the Airdrie and District Hospice Society (ADHS) is seeking volunteers from Rocky View County (RVC) to help with special events throughout the upcoming year.
Jan 15, 2019 12:01 AM By: Ben Sherick 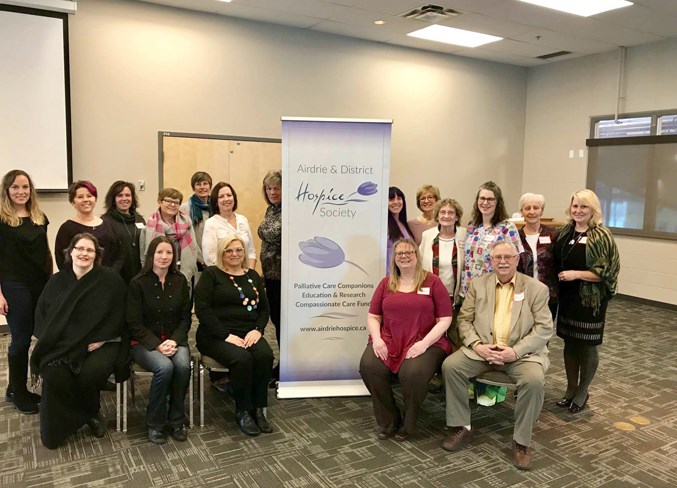 Airdrie and District Hospice Society&#8217;s board members and certified Care Companions are looking for special events volunteers to join their team in 2019.

As 2019 begins, the Airdrie and District Hospice Society (ADHS) is seeking volunteers from Rocky View County (RVC) to help with special events throughout the upcoming year. “As a nonprofit, if we didn’t have a volunteer base, we wouldn’t exist,” said Angela Martel, service co-ordinator for ADHS. “They’re vital to our operation.” According to Martel, a founding philosophy of ADHS is the importance of allowing individuals who have been diagnosed with life-limiting illnesses to remain in their communities and be with family and friends as long as possible before having to move to hospice in Calgary. “Our mission is, no one dies alone,” she said. “Our vision is to get out there and help where [individuals] need it the most.” Volunteers are crucial to fulfilling that mission and vision, Martel said. ADHS volunteers fall into two categories – care companions, who visit patients in their homes, and special-event volunteers who assist at trade shows and with ADHS fundraisers like the annual Hike for Hospice and Tree of Hope ceremony. While the organization is well equipped with a number of care companions, it specifically needs more special-event volunteers. “Often, these trade shows or events are a day or two long,” Martel said. “We just need somebody to man those stations and spread the good word about us.” Those events are regularly hosted in communities neighbouring Airdrie, such as Crossfield, Keoma, Balzac, Madden, Irricana and Beiseker. Martel said volunteers from those communities keen on manning booths and promoting ADHS at those events would be a valuable addition to the organization. “We just want to stretch a little bit more and get out to these districts and spread the word, let them know we are here, we exist, even though we don’t have a facility yet,” Martel said. ADHS isn’t looking for a specific number of volunteers for 2019, Martel said, but is trying to compile a list of possible volunteers who can be called upon to assist with events and promote the organization. “People’s lives are busy,” Martel said. “We find that if they’re able to help out a couple hours a shift, that would be amazing…. It’s whatever people can donate their time for.” Prospective volunteers can contact Martel by phone at 403-880-0424 or email at adhscoordinator@gmail.com