One hundred and thirty-one participants got a glimpse into agriculture in southwest Rocky View County (RVC) July 19, as part of the County’s annual Agriculture Tour. This year’s tour focused on operations in the Jumping Pound and Bragg Creek areas.
Jul 31, 2018 12:01 AM By: Ben Sherick 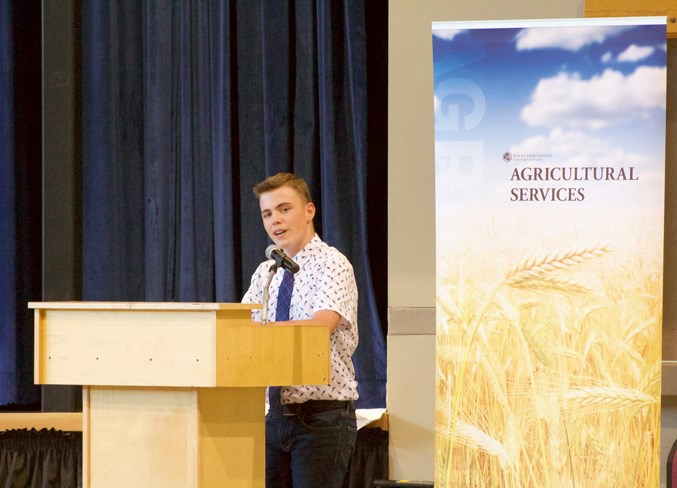 One hundred and thirty-one participants got a glimpse into agriculture in southwest Rocky View County (RVC) July 19, as part of the County’s annual Agriculture Tour. This year’s tour focused on operations in the Jumping Pound and Bragg Creek areas. “The tour’s outstanding,” said Coun. Daniel Henn, chair of the Agriculture Services Board, during a stop for lunch at the Bragg Creek Community Centre. “The Ag Services department from the County’s done a tremendous job setting the whole thing up. We’ve had a beautiful, sun-shiny day. Great turn out, and we’ve visited some really great farms so far.” Henn said one of the interesting aspects of this year’s tour was the great diversity in the type of agriculture in the area surrounding Bragg Creek and Jumping Pound. “For example, we went from a ranch that’s 130 years old to having a presentation on growing hydroponically,” he said. “Just from one extreme to the other, as far as agriculture goes. It doesn’t get any better than that.” The tour began with a visit to Roy and Judy Copithorne’s cattle ranch, west of Cochrane on George Fox Trail. The Copithorne family has ranched in the area since 1886, and is in its third generation. Roy Copithorne gave a presentation on the ranch’s history before his daughter Kate spoke about the family’s newest endeavour – beekeeping. From there, the tour proceeded to WineGlass Ranch, west of Cochrane. Travis Eklund detailed the ranch’s 129-year history and what a year on the ranch entails. The tour stopped for lunch at the Bragg Creek Community Centre. The break included the presentation of the 2018 Master Farm Family award and a speech by Irricana 4H club member Josh Wade on the proliferation of technology. “[Wade] takes great pride in being a farm kid, and is the fifth generation to live and work on a family farm at Irricana – which is going into its 108th year of continuous operation,” said Agricultural Services Officer Laura Poile, by way of introduction. Following Wade’s speech, participants heard a presentation from Munro farms – a microgreen operation run by Jeff and Natasha Munro that grows sprouts and leafy greens using vertical hydroponic towers in their home. The final stop of the tour – Alan and Liz Breakey’s Rust Bucket Farms – included a guided tour of the gardens, a sheep shearing demonstration, and talks on the biodiversity of the foothills ecosystem and best practices for coexisting with wildlife, including bears and cougars. Reeve Greg Boehlke called the day a great success, and said the annual tour is an important way of educating people about RVC and, in particular, its agricultural component. “The biggest importance is enlightenment,” Boehlke said. “Getting people that are from other regions in our municipality and other municipalities…it just lets them see the diverseness of our great county.” “The importance of agriculture to the county goes without saying,” Henn said. “RVC grew out of a real vibrant agricultural community and, as we move forward, a little more land is taken up every day by urbanization, but still, the county has a strong background.”