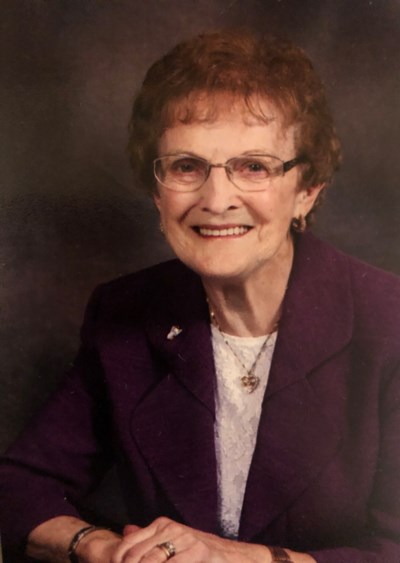 It is with deep sadness that we announce the passing of our loving mother, grandmother and friend, Enid Elsie Pieschel, on June 13, 2020 at the age of 88 years old. She passed away peacefully on the farm after a courageous battle with cancer.

Enid was born in Champion, Alberta to Richard and Doris Davies on January 22, 1932. She was raised on the family farm with her sisters, Irene and Ida.  She went to grade school in Champion and high school in Carmangay.  She moved to Calgary and worked at the Alberta Wheat Pool.

Enid married Richard Pieschel in 1951 and they were together 53 years until Buster’s passing in 2004. They lived their entire married lives on a farm east of Balzac where they raised Hereford cattle and grain farmed.  Here they welcomed 6 children to their family.

Enid was predeceased by her parents, Richard and Doris Davies; her husband, Richard Pieschel; her sister, Ida Greene; her brother-in-laws Earl Smith and Laverne Greene; and her nephews Terry Smith and Warren Smith.

Enid was a dedicated mother and grandmother first and foremost. She treasured her children and embraced every moment with them. She especially loved her role as Grandma. Her favourite thing to do was watch her grandchildren and great grandchildren play sports and participate in activities.  She often became “Grandma” to everyone on the team and was their #1 fan.