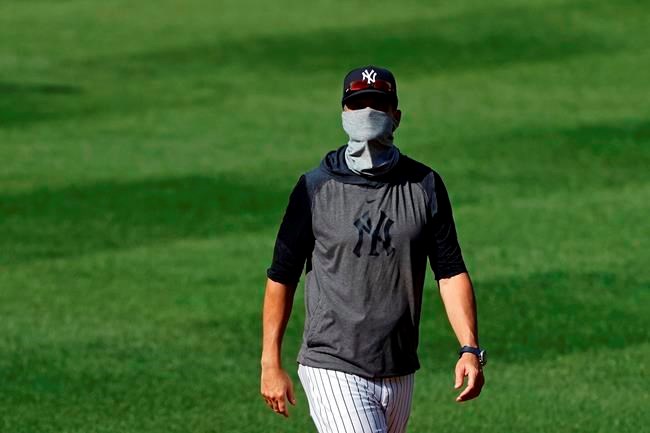 This wasn't a scene anyone at Yankee Stadium wanted to see.

Tanaka was alert and sent to a hospital after being hit in the head by a line drive off the bat of New York slugger Giancarlo Stanton during live batting practice Saturday, a frightening scene moments into the team’s first official summer camp workout. Tanaka was released from the hospital Saturday night and will enter concussion protocol.

“That took a little air out,” manager Aaron Boone said.

Boone also announced that All-Star infielder DJ LeMahieu and right-hander Luis Cessa tested positive for the coronavirus before to New York and are self-isolating at home.

Tanaka's hat flew off and he immediately collapsed to the ground and grabbed his head after being struck by Stanton's comebacker. Trainers quickly ran to the Japanese right-hander, who stayed down for a few minutes before sitting up.

“That’s kind of a freak accident, one in a million chance of happening,” said left-hander Jordan Montgomery, who replaced Tanaka on the mound moments later. “When it does, it’s terrifying.”

Boone said Tanaka showed concussion-like symptoms at the ballpark but they dissipated at the hospital. A CT scan was negative, and the team said he was able to walk on his own.

“I appreciate all the support,” Tanaka tweeted. “I feel it a bit right now, but I’m all good. Going to try to get back on the mound ASAP! Thanks again for all the encouraging words!”

Tanaka's injury took an already bizarre day and turned it .

Yankees players reported to New York on Wednesday for intake testing as Major League Baseball tries to start a truncated, 60-game season on July 23 amid the coronavirus pandemic.

After spending a few days preparing the stadium to host workouts for the team's 60-player roster pool, the Yankees gathered Saturday for their first official day back. Most coaches and some players, including Stanton, wore facemasks as the club went through drills in the eerily empty stadium.

All-Star closer Aroldis Chapman and catcher Gary Sanchez did not participate Saturday. Boone said both had travel issues that delayed their intake testing and are awaiting clearance.

LeMahieu and Cessa won't report until they've cleared quarantine. Boone said LeMahieu is asymptomatic and Cessa has mild symptoms. Boone did not say when each player tested positive.

Before they even began the workout, a few Yankees players were startled mid-stretch when someone set off a firework just outside the ballpark. More bangs intermittently echoed throughout the stadium during the July 4 session.

About 45 minutes after Tanaka was hit, a deafening siren went off inside Yankee Stadium, drowning out music playing through the PA system for about 30 seconds. Emergency lights flashed for about five minutes, as well. The alarm sounded again seconds after the team announced that Tanaka was alert.

The moment with Tanaka, of course, was most troubling of all.

Stanton, who had his jaw broken by a high fastball in 2014, bent over at home plate before walking slowly toward the mound.

Meanwhile, Judge glared at a photographer set up behind home plate and told him to stop shooting.

The moment aired live on a YES Network feed and was shared quickly on Twitter, including by sports network SNY, which airs New York Mets games.

“I understand that people are doing their job and want to show everything we are doing,” tweeted shortstop Gleyber Torres. "I understand that, but showing that exact moment that happened with our teammate does not seem right to us, we feel terrible to see the video in each part of social media.

“I understand that they have to write what happened but do not show that moment, Praying for Tanaka!”

Yankees players, some still stretching at the start of the club’s first official practice, stood or knelt silently.

Stanton was the third batter Tanaka faced to start the session, and Boone said Tanaka asked to pitch without a protective screen — common for pitchers during simulated games.

Montgomery requested an L-shaped screen be set up before he started throwing to hitters about five minutes after Tanaka walked off.

“Some people like doing it, some don’t,” Montgomery said. “I requested it after that, just because I was little shaken up.”

Music playing through the PA system was shut off as Tanaka lay on the mound but was restored while Montgomery pitched. It played through the rest of the workout.

Some Yankees pitchers got another scare during batting practice, when a line drive rocketed into a pack of players gathered along the left field line. Nobody appeared to be hit by the ball.