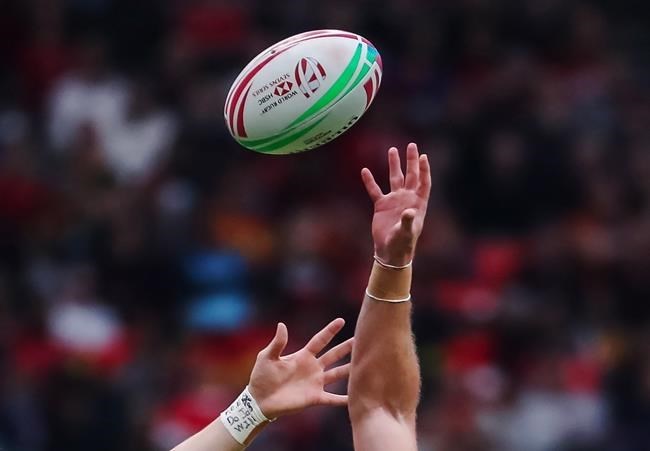 World Rugby has cancelled the remaining rounds of the HSBC World Rugby Sevens Series due to the global pandemic, awarding New Zealand both the men's and women's titles based on the existing standings.

Canadian teams, while realizing sport has to take a back seat in the face of the COVID-19 threat, are left wondering what might have been.

The Canadian women finished third overall while the men were eighth.

Joint events in Hong Kong and Paris plus men's tournaments in London and Singapore and a women's stop in Langford, B.C. had already been postponed. Now they are off the books entirely.

The season ended with five of the eight women's rounds and six of the 10 men's rounds completed.

The last event to take place was the men's Canada Sevens in Vancouver on March 7-8. Canada won bronze in stirring fashion there, only to see its momentum halted by the pandemic.

The Black Ferns dominated the women's season, winning four of the five rounds and finishing third in the other. Australia placed second and Canada, runner-up to New Zealand on three occasions and third once, third.

While Australia and Canada both had 80 points, Canada had more podium finishes (three seconds and one third) than Australia (two seconds and a third). The Canadian women also held the advantage in head-to-head meetings, winning three and drawing one.

The tiebreaker is point differential over the season, however, so Australia got the nod.

"I did feel we were clearly the second-best team in the Series this year behind New Zealand," said Canada coach John Tait. "We had some good battles with them.

"We had some good games with Australia but the record, I think, indicates that we were pretty dominant in those results this year. So it's disappointing because I think we were trending and going in the right direction. It would have been nice, as a consolation, to have second overall in the Series."

A poor start in the season-opening tournament in Glendale, cost the Canadian women in the final standings. They finished sixth while Australia earned eight more points as runner-up.

The women also missed out on playing at their home tournament in Langford, originally scheduled for May 2-3.

The Canadian men, on the heels of their podium finish in Vancouver, had plenty for play for in the remaining four events with Olympic seeding on the line.

The men's original goal had been top eight. But as the season wore on, they readjusted aims and believed they could climb higher up the ladder.

"Obviously it all came together in Vancouver and we didn't want that to be a one-off. And I don't think it was a one-off," said Canada men's coach Henry Paul.

Both Tait and Paul had anticipated Tuesday's decision by World Rugby.

The men continue to train in Langford, albeit in limited fashion due to local restrictions.

Some of the women went home during the pandemic. The team is returning to training, in smaller groups and individually after a break. They're due back in Langford at the end of July to resume centralized training.

World Rugby said there will be no relegation from the women's or men's circuits in 2020.

The final men's and women's events of the developmental HSBC World Rugby Challenger Series were also called off.

Japan was awarded the inaugural men's Challenger Series title after winning gold and bronze in the two rounds that took place in Chile and Uruguay. That means Japan will join the World Series 2021 as the 16th core team.

There will be no promotion to the women's series this year as the inaugural Challenger Series event originally scheduled for March 28-29 in Stellenbosch, South Africa, did not take place.

World Rugby says Olympic seedings will be adapted to include results from the 2021 World Series "to ensure they provide the most robust and accurate representation of current form" for the 2021 Tokyo Games next July.

"While it is very disappointing for players, fans, organizers and everyone involved to have to cancel these events due to the global COVID-19 pandemic, the health and well-being of the rugby community and wider society remains the No. 1 priority," World Rugby chairman Bill Beaumont said in a statement Tuesday,