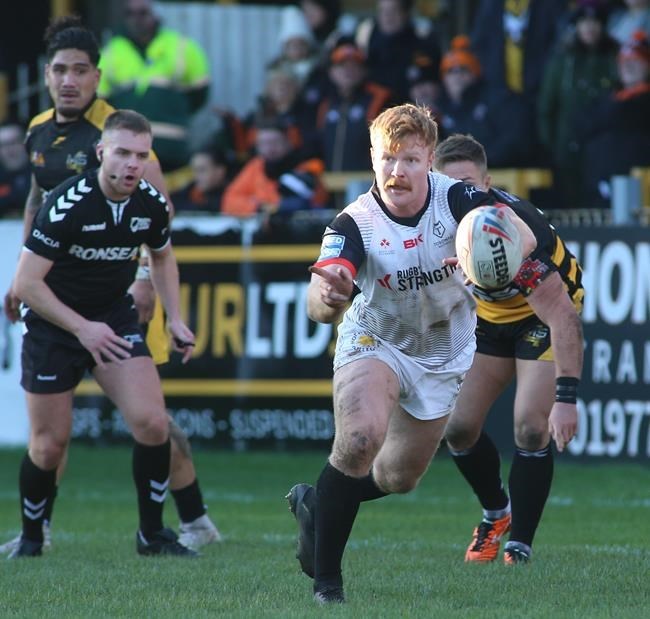 The Toronto Wolfpack's depleted squad has taken another hit with James Cunningham sidelined by hamstring surgery.

The 25-year-old hooker/scrum half went down in the Wolfpack's 32-10 loss at Wigan Warriors last Thursday.

"Hit with another injury," Cunningham said Tuesday on social media. "There’s no worse feeling than not being able to take the field with the boys. Hamstring surgery went well today. Hopefully the next few months will run smoothly and I can get back on the field as soon as possible."

Wolfpack coach Brian McDermott said Cunningham is expected to be out six months.

Despite playing some attractive rugby, Toronto has lost all three games to date in its first season in the top-tier Betfred Super League.

The schedule has not been kind to the transatlantic rugby league team, whose first three opponents finished fifth, third and second in last season's standings. On Friday, they take on No. 4 in Warrington (1-2-0) with St. Helens, last year's Grand Final winner, in the on-deck circle.

Toronto has also been walking a tightrope with its roster.

Due to salary cap issues, the Wolfpack are carrying just a 23-man squad with one of those players (Greg Worthington) out on loan to Featherstone Rovers. Another, New Zealand international Chase Stanley, has yet to join the team because of visa issues.

Adding Cunningham to the injured list leaves McDermott with just 18 players to choose from for his matchday 17 (13 starters plus four on the interchange bench). He had hoped for a 28- to 30-man roster in Super League.

On the plus side, the 18 includes star signing Sonny Bill Williams who is expected to be back Friday after missing the Wigan contest to return to New Zealand for the birth of son Essa, his fourth child.

And forwards Jon Wilkin and Gadwin Springer are healthy again.

Wilkin, a veteran who helps pull the Wolfpack strings, did not make the Wigan game because of a knee problem in the warmup. Springer was forced out of the match early after failing a head injury assessment.

With Mellor out, Blake Wallace has joined captain Josh McCrone at halfback. Hooker Andy Ackers will get help from the versatile Hakim Miloudi, who has been starting at centre.

Toronto has asked rugby league authorities for salary cap dispensation, arguing that it is unable to take advantage of breaks offered to rival clubs because it does not have an academy or training paths that others do.

McDermott also says the Wolfpack are paying a premium for players by virtue of the cost of living in Toronto and the expense players incur in bringing their families over.

Various measures to help Toronto have reportedly been voted down. But it appears the Wolfpack may be allowed to sign two domestic under-21 players without adding to their salary woes.

It's of limited help given the lack of rugby league reserves in Canada. Quinn Ngawati, a 20-year-old from Victoria, would be a natural signing.

Ngawati left the Wolfpack in October 2018 after a handful of games to resume his rugby union career. He has been training with the national sevens team in recent months.

While Toronto is the only team yet to win this season, the Wolfpack lead the 12-team league in offloads (59) and are second in tackles made (1,024).

Leutele leads the league in metres made (428) while Miloudi is tops when it comes to offloads (13). Toronto prop Brad Singleton is the leading tackler (124).

This report by The Canadian Press was first published Feb. 18, 2020.