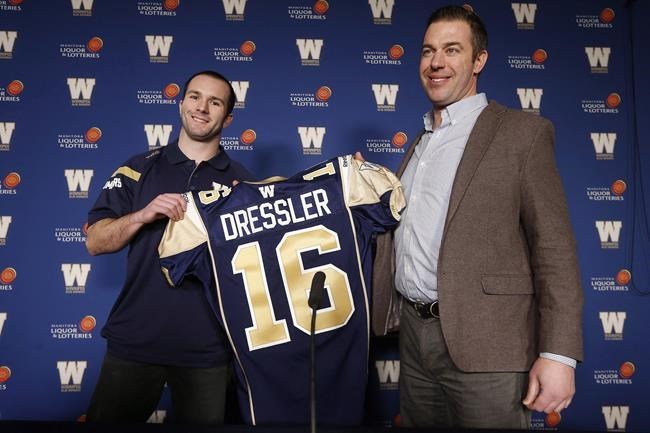 Kyle Walters is generally a pessimist by his own admission, but the Winnipeg Blue Bombers GM is optimistic CFL training camps will open without a hitch.

All nine CFL teams are scheduled to open training camp Sunday. Trouble is, that's the day after the present collective bargaining agreement expires as both the league and CFL Players' Association continue working to secure a new deal.

Last month, players voted over 97 per cent in favour of a strike to give their bargaining unit a strong sign of support and solidarity in contract talks. But if a new agreement isn't reached by Saturday, players with Winnipeg, the B.C. Lions, Saskatchewan Roughriders and Montreal Alouettes won't report for the start of training camp.

Despite the labour uncertainty, Walters is taking a business-as-usual approach.

"I've joked around here that I'm generally a pessimistic type of person," Walters said with a chuckle during a conference call Monday. "But I'm optimistic at this time of year with the CBA and I was (in '14).

"It's full speed ahead with the task at hand, which is training camp. Until told otherwise, that's what I'm believing."

Contract talks five years ago between the CFL and CFLPA were testy. Negotiations broke down several times and there was even a threat of a strike before players ultimately reported to camp and the two sides were able to hammer out a five-year agreement.

CFL players have gone on strike once, in 1974, but the situation was settled prior to the start of the regular season.

Winnipeg will open its rookie camp Wednesday. Traditionally, veteran quarterbacks have participated on a voluntary basis. Again, if there's no new contract in place, the expectation is the veterans won't attend this time around.

"I don't want to speak on their behalf," Walters said. "I'm keeping all CBA matters at arm's length, deferring all of the questions to the league and not even attempting to try to predict what players will or will not do.

"We focus on ourselves and getting draft picks signed and making sure our numbers add up here. We're putting together bodies for a competitive camp and if something happens, we'll adjust on the fly. (We're) positive everything is going to work out in the end."

"We're in talks and I'm sure things will get sorted out. Just don't know when."

Even if Kongbo signs before the start of camp, Winnipeg will have to wait for the six-foot-five, 254-pound native of Surrey, B.C. He suffered a serious knee injury — tearing both the ACL and MCL — during a game in October versus Auburn.

There's plenty of optimism in Winnipeg this season, and with good reason. The Bombers have compiled a 33-21 regular-season record over the last three years and reached the playoffs each time.

"I'm just excited to get back on the field and have some guys running around competing," Walters said.