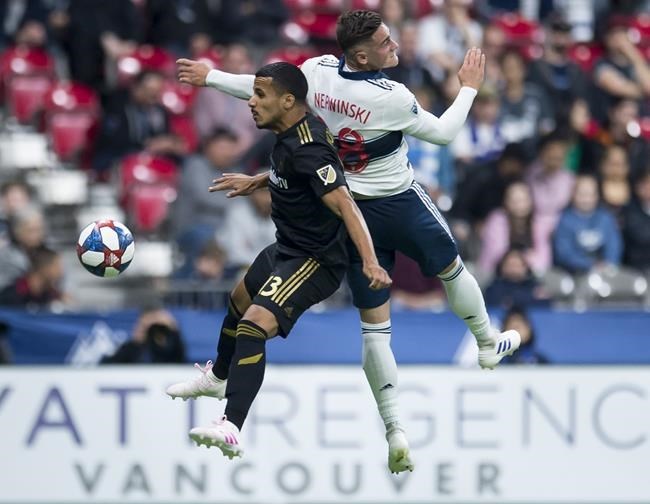 VANCOUVER — The Vancouver Whitecaps finally have a win in the books but there was little time for celebration this week.

Less than 24 hours after posting a 1-0 victory over Los Angeles FC on Wednesday, the team assembled at Vancouver's airport, ready to travel across the continent to face Orlando City SC on Saturday.

The contest will mark the 'Caps (1-4-2) third game in nine days, including a pair of road matches.

Gruelling schedules are simply part of life in Major League Soccer, goalie Maxime Crepeau said at the airport before the Whitecaps left for Florida.

"It's the reality of the game," he said. "There's no excuse. We're prepared for it. We're professionals. We recover well and we're ready to go after that."

Despite the busy stretch, the Whitecaps have taken four points from their last two games, including their first win of the season on Wednesday.

The team will be looking to build off those results on the road trip, said Russell Teibert.

"(Wednesday's win) was a big relief for everyone, getting the monkey off our back, getting the first three points," said the midfielder. "Obviously we need to carry that momentum into this game in Orlando."

But the intense schedule will have an impact on how the squad prepares to face Orlando City (2-3-2), said coach Marc Dos Santos.

Flying from B.C. to Florida limits the team's ability to get on the field for tactical training, so they'll need to rely more on preparing via video, he explained.

Before staff can look at potential lineups, however, they'll need to assess how players have recovered from Wednesday night's physical win and a full travel day.

"We need to try to put the best set up on the field to have as fresh of a team as we can," Dos Santos said. "Because it's important against Orlando to hold players like Dom Dwyer and (Luis 'Nani' Almeida). They have an experienced team."

Dwyer and Almeida each have three goals for Orlando this season, and shutting the pair down will be key in Vancouver's quest for road points.

Scott Sutter didn't play with Almeida, but he knows Dwyer better than most of his Whitecaps teammates after spending two seasons with the English striker in Orlando.

"He's one of these guys that you love having on your team and you hate having against you. So it'll definitely be a fun one," Sutter said.

Teibert notes that the Whitecaps have already been successful in smothering a pair of offensive juggernauts this week. The team kept LAFC's Carlos Vela and Diego Rossi from registering a single point on Wednesday.

"(Saturday's game is) almost similar to this midweek game in that we played the best team in the league with possibly the best player in the league," Teibert said. "But you can't tailor the game plan around one individual player. Things change, the dynamic of the game changes. But if you stick to your plan, good things will happen."

Orlando has a dynamic forward group and a stable back end, said Sutter, who spent 2017 and 2018 playing in Florida.

"But you know, they have their issues as well and hopefully we can exploit those," said the veteran right-back.

Sutter said he's long been looking forward to facing off against his former club.

"It'll definitely be an emotional one," he said. "I spent a couple of good years there. The club was good to me, the people were good to me, the fans were great to me. So it'll be nice to go there and obviously hopefully get a win."

PERFECT RECORD: The Whitecaps are undefeated against Orlando City SC, holding a 3-0-1 all-time record and having won both of their previous away games against the Lions.

GIRO FINED: Giro was issued an undisclosed fine Friday after the MLS Disciplinary Committee found him guilty of simulation/embellishment in the 11th minute of Wednesday's game.

OFFENSIVE OUTPUT: The 'Caps remain near the bottom of the MLS standings when it comes to goals for. They've scored just six this season, tied with the San Jose Earthquakes and Portland Timbers for the worst offensive output so far in the Western Conference. Orlando's 11 goals place them third in the East behind Toronto FC and D.C. United.