While he's never won in Toronto, Hinchcliffe the headliner at his hometown race 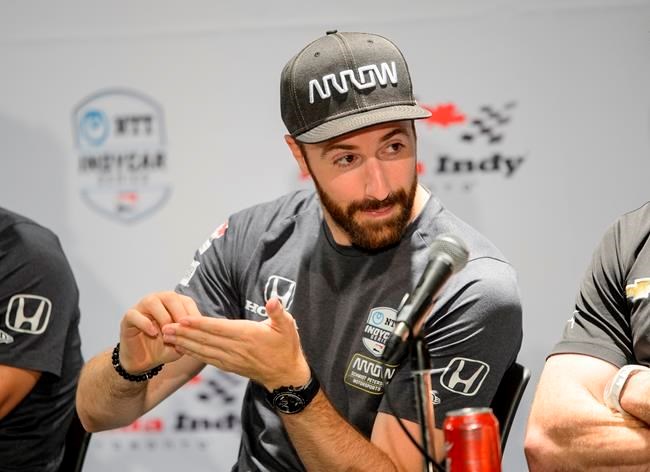 TORONTO — When it was James Hinchcliffe's turn to speak among the panel of IndyCar drivers at Thursday's opening news conference, emcee Michael Young jokingly skipped right past the Canadian.

"James Hinchcliffe, thanks for joining us. And now we meet Simon Pagenaud," Young said, tongue in cheek.

"You can say what you want man, this is my town," Hinchcliffe fired back with a laugh.

The goodnatured jab was both a highlight of an entertaining news conference, and underlined Hinchcliffe's star status in Toronto. The 32-year-old from Oakville, Ont., has never won the Honda Indy Toronto. But he's the headliner just the same.

"It's always incredible to come back here to Toronto, and get to race around basically my backyard," Hinchcliffe said. "This is the race that made me fall in love with Indy Car racing as a kid, and made me want to be an Indy Car driver."

The IndyCar championship battle heats up on the streets of Toronto as the Series returns from a three-week hiatus.

Hinchcliffe has never won on his home track, but has been solid the last three seasons, with two third-place finishes, and no finish lower than fourth.

While Hinchcliffe is pulled every which way, from charity appearances to media interviews, when he arrives in town, the Canadian always feels privileged to be able to race in front of a home crowd.

"So many of the guys sitting up here don't get races in even their home country," Hinchcliffe said.

"I guess it's the closest thing to a home race for me, being part of the Commonwealth," he said. "I'll take that. I don't get the cheers obviously that Hinch does."

"I think athletes put so much pressure on themselves to perform, so we could be in Toronto or Tahiti, I want to win the race," said Hinchcliffe, who's ninth in the IndyCar Series standings with five top-10 finishes. "What it really means here is the emotion behind it. If you have a bad day on track, it feels a lot worse. If you have a good day on track, man it feels a whole lot better too."

Hinchcliffe has fond memories of watching the race that snakes around Toronto's Exhibition Place. His lifelong ties to the event certainly aren't lost on him.

"You stand there in pit lane and you look across Turn 9 and Turn 10 and see everybody, I remember being there as a kid, I grew up here, literally here, on these grounds, this was my favourite week of the year as a kid," he said. "To come back and be on the other side of the fence is amazing."

Pagenaud, seated next to Hinchcliffe, took his turn to poke some fun at the Canadian on Thursday as well. The Frenchman wore a gold ring the size of an eyeball, a prize for winning the Indy 500 in May. The gaudy ring was tough to miss.

"It's very subtle," Hinchcliffe joked, as Pagenaud flashed his ring at the Canadian.

"I'm just going to stick it in his face like that the whole day," Pagenaud laughed. "If you're not proud to wear this then you've got a problem."

Pagenaud said Toronto's road course, which is notoriously bumpy, is one of his favourites.

"It's very difficult to get right, there's always a lot of action in the race, you never know who's going to win," said Pagenaud, who's third in the Series standings.

Dixon's three victories in Toronto included back-to-back wins in 2013. When Dixon was asked about the secret to his success in Toronto, Hinchcliffe pulled out an imaginary notepad and pretended to take notes.

"It's a good question," said Dixon, who's fourth in the standings. "It's (a track) that suits my driving style, it's quite short, it's quite aggressive."

Three days before the drivers go head to head in Sunday's race, they were asked about their obvious camaraderie.

"We're kind of like a circus, we show up to a city, perform for three days, tear down and move to the next city. We know when we put the helmets on and the visors down, we've got to give everybody no more than an inch and go for it."

Raptors will face Houston, Portland and Phoenix in three scrimmages
Jul 4, 2020 10:14 AM
Whitecaps' match against FC Dallas at MLS is Back Tournament pushed back
Jul 4, 2020 9:32 AM