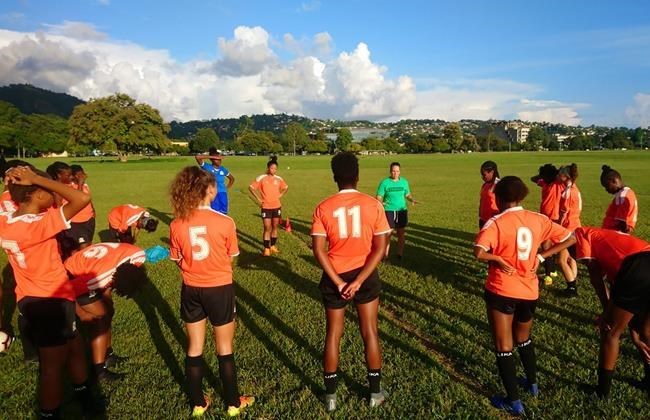 Coach Jene Baclawski had been on the job just a week with her St. Kitts and Nevis team before Caribbean Olympic qualifying started in late September.

It didn't matter as the underdog Sugar Girlz advanced to the CONCACAF Women's Olympic Qualifying Championship for the first time after winning its Caribbean qualifying group. Baclawski's team went 3-0-1 in outscoring host Trinidad and Tobago, the Dominican Republic, Antigua and Barbuda, and Guyana 20-2.

The degree of difficulty goes up substantially this week in south Texas as No. 127 St. Kitts opens against No. 8 Canada before facing No. 26 Mexico and No. 51 Jamaica in south Texas.

"It's going to be a challenging set of games for us, there's no question about it," said Texas-based Baclawski, who coaches St. Kitts part-time. "All three teams in our group have had a chance to go to the World Cup. We haven't."

First up is Canada, on Wednesday at H-E-B Park in Edinburg. The two teams have never met before.

The 32-year-old Baclawski will be drawing up plans to try and stop 36-year-old Christine Sinclair, who comes into the game needing just one goal to tie retired American striker Abby Wambach's world record of 184.

"Personally I have always been a fan of her," Baclawski said of the Canadian captain. "And I feel honoured to be on the field, to play in the same game. I think she's a trailblazer for women's soccer globally. And we wouldn't be here in so many ways if she hadn't been the kind of player that she is.

Baclawski also has some Canadians of her own.

St. Kitts has a population of some 54,000 — about the same as North Bay, Ont. — and has looked abroad for talent with ties to the islands. About half of the team comes from abroad thanks to family bloodlines.

The three sisters have yet to line up together because Carley was dealing with school responsibilities and some injuries.

"Who knows. I think there's a strong possibility that the three of them could be on the field. I just have to make sure I say the right name on the right one," Baclawski added with a laugh.

Baclawski believes her team has a chance to advance out of the group stage if it stays true to itself and performs in all three group games.

For a start, Baclawski likes the fact her team is playing in the smaller, laid-back Edinburg, rather than the hustle and bustle of Houston.

"It would be very foreign to many of the players' experience and another level of stress, so I'm happy we're here."

The St. Kitts and Nevis Football Association has opted for foreign part-time coaches with Mexican Jacques Passy overseeing the men and Baclawski the women. It has looked to match both programs with Passy and Baclawski coaching the senior squads while providing direction for the rest of the men's and women's teams.

When not coaching St. Kitts, Baclawski is technical director of the South Texas Youth Soccer Association. Based in Austin, she also serves as a U.S. Soccer Federation instructor for coaching licence courses.

The future looks bright for the St. Kitts women with more than half of Baclawski's roster under the age of 20.

"It's challenging in unique ways. Just like any kind of startup program would be," she said. "There are pieces we're trying to get better and trying to improve. But ultimately I'm really lucky, I'm very fortunate to get to do something I love on a larger scale. And I look forward to continuing to do that."

After St. Kitts, Canada faces Jamaica on Feb. 1 and Mexico on Feb. 4 in Group B play with all the games in Edinburg. The top two teams in the pool will then meet the top two from Group A (No. 1 U.S., No. 37 Costa Rica, No. 53 Panama and No. 58 Haiti) in the semifinals in Carson, Calif., with the semifinal winners earning Olympic qualification.

Canada is coming off back-to back bronze medal performances at the 2012 and 2016 Olympics.

This report by The Canadian Press was first published Jan. 27, 2020.