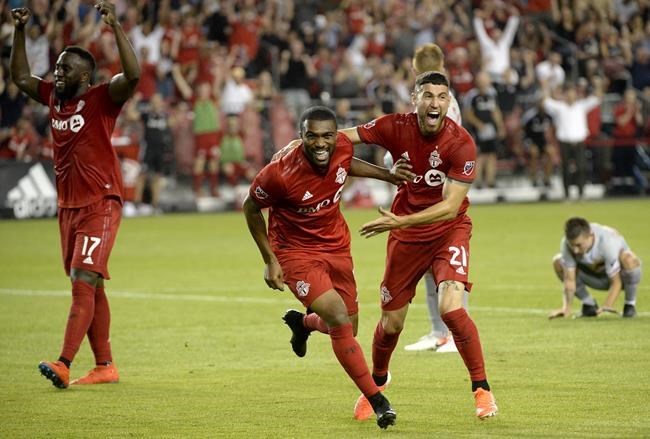 Toronto FC has opted not to pick up the contract option of Ashtone Morgan, the team's longest-serving player, but says the homegrown fullback could still be back.

It's the same for French winger Nicolas Benezet, whose loan deal expires at the end of the year.

There was no resolution either Thursday to captain Michael Bradley's future with the MLS club, although GM Ali Curtis sounded optimistic.

"We're excited to have consistency and bring back most of the team that helped us win the Eastern Conference championship," Curtis said in a statement. "While we have had positive discussions with Michael and his representation, we also remain in contact with Nico and Ashtone regarding a potential return to the team for 2020. We have a strong group, and we hope to improve upon our 2019 campaign."

The 28-year-old Morgan, a well-liked member of the Toronto roster who earned US$133,500 last season, made his pro debut in 2010 in the CONCACAF Champions League against Panama's Arabe Unido. In nine seasons as a Red, the Canadian international has appeared in 127 games (92 starts).

There was no word on the future of veteran defender Drew Moor other than to say the 35-year-old is out of contract at the end of the year.

Daniels spent the season on loan with the Ottawa Fury while Telfer was with York 9 FC and Bakero with Phoenix Rising FC.

Bradley's $39-million, six-year contract expires at the end of the year. But both sides seem willing to make a deal.

Team president Bill Manning, speaking Nov. 13 at the club's end-of-season media session, said he had instructed Curtis to "close it in the next week or so."

And Bradley, who had opted not to discuss his contract status during the season to avoid making it a distraction, said he was confident a deal could be found.

The question is whether he returns as a designated player or is converted to a lower salary using targeted allocation money. Going the latter route would allow Toronto to sign a new designated player to join Altidore and Pozuelo.

The Toronto braintrust has said its top off-season goal is acquiring a second scoring option alongside Altidore.

Current rules allow for team to have as many as three designated players, who each count the maximum salary budget charge ($530,000 in 2019) no matter how much they are paid. The level below that involves targeted allocation money, with a maximum annual salary of $1.5 million.

Toronto was unbeaten in 13 league games (7-0-6) going into the Nov. 10 MLS Cup final, dominating the championship game for almost an hour before Seattle scored on a deflection. Things went south quickly and the Sounders won 3-1, defeating Toronto for the second time in three MLS Cup final meetings over the past four seasons.

Toronto finished the season with a 13-10-11 record, moving into fourth spot on the final day of the regular season.

In other league news Thursday, the New York Red Bulls signalled a changing of the guard by parting ways with veteran goalkeeper Luis Robles and forward Bradley Wright-Phillips

The Red Bulls declined the option on the 35-year-old Robles, who ranks sixth all-time in league history with 114 goalkeeper wins and eighth in shutouts with 72. Robles is eligible for free agency.

Wright-Phillips, 34, is out of contract after a season limited to one goal and one assist in seven games played. The English forward has a franchise-best 108 regular-season goals, with two Golden Boot Awards to his credit,

Portland did not exercise its option on designated player Diego Valeri, but said talks continue with the 33-year-old Argentine midfielder. Valeri had eight goals and 16 assist last season — his seventh in Portland — while making $2.42 million.