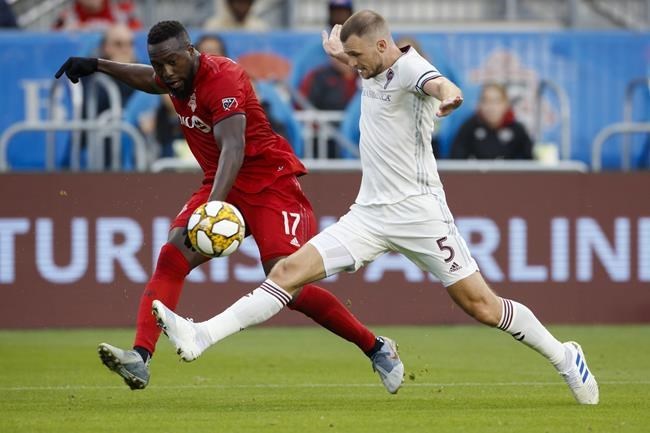 The big man, who missed TFC's playoff wins over D.C. United and New York City FC with a quad strain, was at training Sunday but went for a solo run with a trainer apart from the rest of the team in the portion of the session open to the media.

Altidore did not train outside Saturday in the wake of a Friday PRP (platelet-rich plasma) injection, which is designed to aid in the healing of muscle, ligament and tendon tear.

"He got some work in the gym (Saturday). He was back out on the field doing work today," said coach Greg Vanney. "So he's making strides towards hopefully being available for us on Wednesday."

Altidore, who scored 11 goals in 22 league appearances this season, did some high-speed running and ball work Sunday on a wet, windy day but still has more steps to take before getting the green light, according to his coach.

"We haven't put him in front of goal to do a lot of shooting ... We'll start hitting some balls over different distances (Monday), then building into some final prep work on goal hopefully on Tuesday," said Vanney.

"I know he feels and looks like he's close," Vanney added. "And so (we're at the) final stages now of hopefully getting him ready and having him be a part of the group and play a role."

Spanish playmaker Alejandro Pozuelo, who scored both goals in TFC's 2-1 win in New York, has been pushed up front in Altidore's absence.

Centre back Omar Gonzalez,  who missed the D.C. United game due to a hamstring issue but made the bench for NYCFC, has returned to full training. Vanney said there were no other injury concerns.

A win on the artificial turf at Mercedes-Benz Stadium and Toronto will be headed to its third championship game in four seasons. TFC lost to Seattle in 2016 on a penalty shootout, avenging the loss the next year by beating the Sounders 2-0.

Fourth-seeded Toronto is undefeated in its last 12 league games (6-0-6) and has not lost since Aug. 3 when it was beaten 2-0 at the New York Red Bulls.

Second-seeded Atlanta is unbeaten in its last four league outings (3-0-1), including playoff wins over No. 7 New England and No. 3 Philadelphia. It has lost just once in its last seven league matches (5-1-1) and finished eight points ahead of Toronto in the regular season.