The latest on Day 1 of the National Hockey League's restart 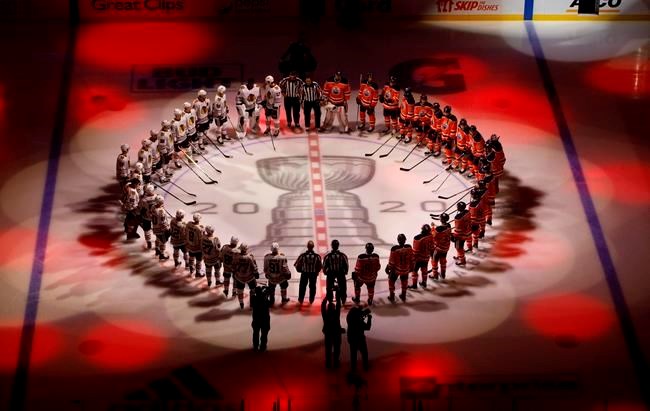 Here is the latest news on Day 1 of the National Hockey League's restart in Toronto and Edmonton. All times Eastern.

The Calgary Flames rode superior special teams to a 4-1 win over demoralized Winnipeg Jets to start their qualifying-round series.

Andrew Copp countered for the Jets in the first period.

Cam Talbot made 17 saves for the win in his first playoff start with the Flames.

Jeff Petry scored at 13:57 of overtime, Carey Price made 39 saves, and the underdog Montreal Canadiens stunned the Pittsburgh Penguins 3-2 to open their best-of-five qualifying round series as the NHL raised the curtain on the restart to its pandemic-halted season.

Petry picked up a loose puck in the right faceoff circle and ripped a shot through Murray before being mobbed by teammates.

Jesperi Kotkaniemi and Nick Suzuki had the goals in regulation for Montreal, the Eastern Conference's No. 12 seed in the league's 24-team resumption of play.

Sidney Crosby and Bryan Rust replied for Pittsburgh, the No. 5 seed in the East, which will look to rebound in Monday's Game 2.

Scheifele's skate appeared to get caught under him as he was pushed by Flames winger Matthew Tkachuk at Calgary's blue-line opposite the players' benches at 5:41.

Winnipeg's top centre writhed in pain and required assistance from a Jets trainer and teammate Nathan Beaulieu to leave the ice.

Scheifele co-led Winnipeg in points this season with 77 and led the club in assists with 44.

Goalie Cam Talbot will start for the Calgary Flames against the Winnipeg Jets in the opening game of their qualifying round series tonight.

The Flames announced the decision just before game time in Edmonton after coach Geoff Ward declined to name a starter earlier in the day.

He started four of Calgary's last five games in March for a 3-1 record.

The New York Islanders have the early edge in their qualifying series against the Florida Panthers.

The Islanders beat the Panthers 2-1 in Game 1 of the best-of-five series in Toronto.

The Islanders bounced back for the first game of their restart after losing seven in a row prior to the league suspending play in March.

Former Ottawa Senator Jean-Gabriel Pageau and Anthony Beauvillier scored for the Islanders, while Jonathan Huberdeau replied for the Panthers.

The 18-year-old Robertson spent the 2019-20 regular season with the Peterborough Petes of the Ontario Hockey League.

He had league-best 55 goals and 31 assists in 46 games for Peterborough before the OHL's season was suspended due to the COVID-19 pandemic.

Maple Leafs head coach Sheldon Keefe says that Robertson can make a difference offensively if he's given the opportunity.

Rookie winger Dominik Kubalik scored two goals and added three assists, leading the Chicago Blackhawks to a 6-4 win over the host Edmonton Oilers in the opener of their best-of-five qualifying round series.

Connor McDavid had a goal and three assists for Edmonton.

It was a continuation of the torrid scoring pace set by Kubalik, a 24-year-old Czech forward and a Calder Trophy finalist. He racked up 30 goals and 16 assists before regular-season play was halted in mid-March due to the COVID-19 pandemic.

The Edmonton Oilers have replaced starting goalie Mike Smith with Mikko Koskinen after falling behind 5-2 against the Chicago Blackhawks.

Oilers coach Dave Tippett made the move early in the second period after Smith gave up his fifth goal on 23 shots in Edmonton's first game of the NHL restart.

Chicago is the lowest-seeded team in the Western Conference qualifying round.

One of the game's biggest stars has scored the first goal for a Canadian team in the NHL's restart.

The goal came on an Oilers power play.

Edmonton missed the playoffs in three of McDavid's first four seasons with the team.

Minnesota Wild defenceman Matt Dumba made a speech about social and racial justice prior to Edmonton's first game of the NHL restart before he kneeled for "The Star Spangled Banner."

Players from the Edmonton Oilers and Chicago Blackhawks stood around the centre-ice circle for both anthems prior to the game.

Oilers defenceman Darnell Nurse and Blackhawks goalie Malcolm Subban each put a hand on Dumba's shoulder as he kneeled for a recording of the American anthem. All three players are Black.

Mike Smith will start in goal in Game 1 for the Edmonton Oilers against the Chicago Blackhawks this afternoon.

It was a toss up between Smith and Mikko Koskinen as both put up similar numbers working in a platoon in the regular season.

Corey Crawford is starting, as expected for Chicago.

Crawford only began skating again last week after contracting COVID-19. He was 16-20-3 with a .917 save percentage this season.

Whether Cam Talbot or David Rittich would get the nod in Game 1 of the best-of-five qualifier against the Winnipeg Jets was a matter of intense speculation in Calgary.

Talbot and Rittich each gave up a pair of goals to the Edmonton Oilers in their half of an exhibition game earlier in the week, although Talbot was the busier of the two stopping 19 of 21 shots.

Ward says not naming a starter could create a slight advantage for the Flames, with the Jets being uncertain of who they'll be facing.

The Carolina Hurricanes have won the first game of the NHL's restart.

The Hurricanes beat the New York Rangers 3-2 in Game 1 of their best-of-five Eastern Conference qualifying round series before no fans at Scotiabank Arena.

Sebastian Aho led the Hurricanes with a goal and an assist, while Jaccob Slavin and Martin Necas also scored for Carolina. Mika Zibanejad and Marc Staal replied for the Rangers.

The Hurricanes are used to strange scenes in Toronto. In their last appearance at Scotiabank Arena on Feb. 22, the Hurricanes beat the Maple Leafs 6-3 with emergency goaltender David Ayres recording the win in net.

Ayres, a Zamboni driver and the manager of a nearby Toronto arena, had to come in after the Hurricanes' two regular goaltenders both got hurt.

It took just 61 seconds for the first goal of the NHL's Stanley Cup qualifying round.

Carolina defenceman Jaccob Slavin was unmarked, snapping a pass over Henrik Lundqvist's shoulder to give the Hurricanes a 1-0 lead over the New York Rangers.

Rangers forward Jesper Fast had been dropped by a body check from Carolina's Brady Skjei earlier in the play and failed to mark Slavin skating in from the point.

Sebastian Aho saw the open man, however, and sent a cross-ice path to the streaking Slavin for the quick goal.

Fast left the ice and went to the locker-room shortly after the play.

Less than two minutes after the goal, New York's Ryan Strome and Carolina's Justin Williams had the first fight of the restart.

The NHL's restart is officially underway.

Jordan Staal of the Carolina Hurricanes and Mika Zibanejad of the New York Rangers took the opening faceoff in Game 1 of their Eastern Conference qualifying round series at Scotiabank Arena.

With it being a Hurricanes home game, the teams came out to the song "Rock You Like A Hurricane" by Scorpions.

"The Star Spangled Banner" was first, followed by "O Canada" despite the fact no Canadian teams were in the first game.

No players appeared to kneel.

In the NBA the past two nights near Orlando, Fla., many players kneeled for opening games of their restart to show their support for social justice. Some players also kneeled for Major League Baseball games to start the season last month.

Veteran goalie Henrik Lundqvist will start for the New York Rangers in the NHL restart opener against the Carolina Hurricanes at Scotiabank Arena.

Rookie goalie Igor Sheshterkin has been declared unfit to play.

Lundqvist's start comes as a surprise to many observers. Many thought the 38-year-old Swedish star might have already played his last game with the Rangers.

The slogan also appears on the video board ringing the upper bowl and above the entrance to every section in the stands.

The #WeSkateFor hashtag is part of an NHL campaign to support social justice and front-line workers.

For the first time since 1986, NHL teams will begin best-of-five series today in the qualifying round.

The most recent best-of-five series were held beginning on April 9, 1986.

On opening night of those playoffs, the Calgary Flames faced the Winnipeg Jets. The same two teams meet tonight in the final game in Edmonton.

Teams that win Game 1 in a best-of-five series own an all-time series record of 68-15.

The five games today to open the league's restart mark the first NHL contests to be held in August.

The league says it will salute social-justice activists throughout opening day. Before the Chicago Blackhawks-Oilers game in Edmonton and the Montreal-Pittsburgh game in Toronto, the NHL says it will pay tribute to 24 health-care professionals and other essential workers in virtual ceremonies.