Sources: Jim Lawson to step down as chairman of the CFL's board of governors 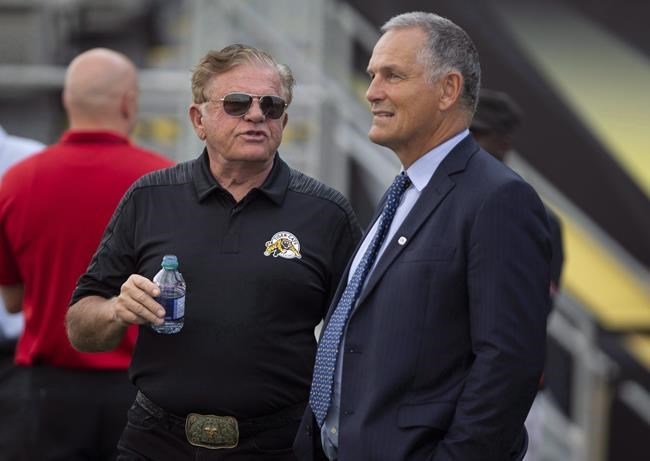 CALGARY — Jim Lawson's time as CFL board chairman will end this weekend.

Two CFL sources say Lawson will step down from his post following the Grey Cup game Sunday. The sources added Lawson formally informed the CFL board of governors of his intention last week.

The sources were granted anonymity because the decision has not been announced.

To recognize Lawson's service, two sources said he'll receive the Commissioner's Award from Randy Ambrosie on Thursday night during the league's awards banquet. The honour is given annually in recognition of dedication and significant contribution to Canadian football.

Lawson's decision will allow the 61-year-old Hamilton native to concentrate full-time on his duties as chief executive officer of Woodbine Entertainment Group, Canada's largest racetrack operator. He assumed that post in 2015 after spending three years as chair.

Lawson is credited for transforming the lands surrounding Woodbine Racetrack in Toronto into a large real estate development.

Lawson was appointed CFL board chairman in 2013 and twice served as interim commissioner.

His first stint was from December 2014 to April 2015 following the departure of Mark Cohon until Jeffrey Orridge was hired. He again served as acting commissioner from June 15, 2017 when Orridge departed until Randy Ambrosie was hired July 5, 2017.

His father, Mel, played quarterback for the 1943 Grey Cup-winning Hamilton Flying Wildcats. He scored the winning touchdown and at the age of 20 became the youngest quarterback to ever win the title.

One of Mel Lawson's most recognized horses was Eternal Search, who was the country's second-leading money winner among fillies behind Glorious Song when she retired. Eternal Search, a grandsire of the great Northern Dancer, earned Sovereign Awards as Canadian champion sprinter (1981) and Canada's champion older mare (1982-83) before being put down in '07 at age 29.

In the 1984 Queen's Plate, Lawson's horse Let's Go Blue and Key to the Moon were battling down the stretch before Key to the Moon finished first. Both jockeys claimed foul but the result stood.

There were members of Lawson's camp who felt an appeal could result in the decision being overturned. But Lawson declined, choosing instead to accept the steward's decision as final.

Mel Lawson was inducted into the Canadian Horse Racing Hall of Fame in 2010 before passing away in 2011.

Jim Lawson was also drafted by the Montreal Canadiens in 1978 out of Brown University. He played two seasons with the AHL's Nova Scotia Voyageurs before retiring to pursue a law career.

In 2018, Lawson was elected as chairman of the board by the directors of the Ontario Racing. He also served as Chairman of the Jockey Club of Canada (2010-2015).