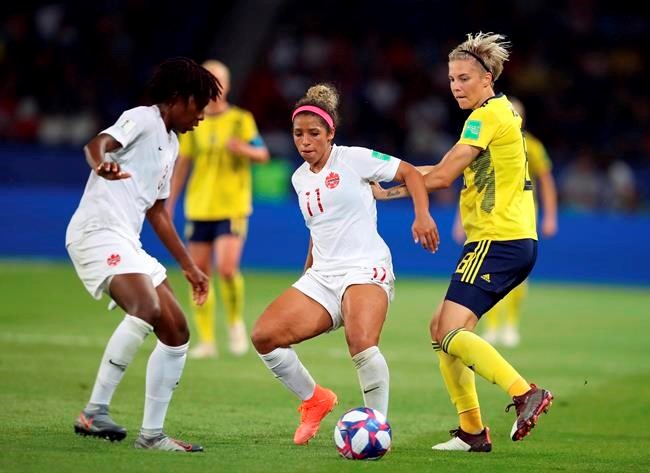 "We've been training in the altitude and in the heat and we've been able to hit the soccer field that we're going to be playing the matches on," said the Royals midfielder. "So if you want to think of that as an advantage, I think we can certainly view that.

"In a World Cup-style tournament, any team on any day can win. But I'm hoping the training in that altitude and heat will give us that fitness advantage if possible."

The NWSL becomes the first major North America league to resume play during the COVID-19 pandemic when the eight-team tournament kicks off Saturday with the defending champion North Carolina Courage facing the Portland Thorns and the Chicago Red Stars taking on the Washington Spirit.

The first 20 games of the tournament take place on the artificial turf at Zions Bank Stadium in Herriman, some 30 kilometres southwest of Salt Lake City. The MLS team and its reserve side both train there.

The July 22 semifinals and July 26 final are 25 kilometres south of Salt Lake City at Rio Tinto Stadium in Sandy where both Real Salt Lake and the Royals play on a grass field.

The elevation at Herriman is 1,500 metres while Sandy is 1,350 metres above sea level.

Scott and Royals teammate Diana Matheson are two of the 14 Canadians who will be at the tournament — 15 if you include Washington Spirit goalkeeper Devon Kerr, a Canadian-born youth international who switched her allegiance from Canada to the U.S.

With the Orlando Pride forced to withdraw from the event due to six players and four staff members testing positive for COVID-19 while in their home market, Canadians Erin McLeod and Shelina Zadorsky will have to watch from the sidelines.

Another advantage for the Royals is they get to sleep in their own beds. Other players, and support staff, will be housed either in complex dormitories or at a hotel.

Scott says the Royals will have to follow the same protocols as other teams at the tournament, meaning they too will be in lockdown, staying in the NWSL bubble with regular COVID-19 testing.

"I'm pretty comfortable," said Scott. "At first I was a little leery of the situation but they've been able to answer our questions, anything that's come up with regards COVID and there's a lot of protocols in place to make us feel safe — and obviously doing what we love. We're back on the field."

As of Wednesday, the Utah Department of Health had reported 18,714 COVID-19 cases with 163 deaths. Salt Lake County, the state's most populous county in Utah which is home to Salt Lake City and its environs, accounted for 9,460 of the cases and 105 of the deaths.

For Scott, a hard-tackling midfielder known as The Destroyer, the tournament marks a welcome return to action. The NWSL regular season was slated to kick off April 18 but was delayed due to the global pandemic.

A proud Winnipegger, Scott left for the tournament with a smile after Ritz, Oreo and Cadbury combined to donate $40,000 to Winnipeg Harvest, a food bank, on her behalf. The donation was part of a $155,000 gift by the snack companies, with $40,000 going to the Daily Bread Etobicoke, the food bank in Olympic trampolinist Jason Burnett's Ontario home town, and another $75,000 to the Canadian Olympic Foundation.

Scott had done some work with Mondelez International, the parent company of the snack brands, and was happy to be one of the Olympic athletes taking part in its Feed Hope in Canada campaign.

"It's a great chunk of change and it's going to really help a lot of people in Winnipeg, especially during these crazy times," said Scott.

The eight Challenge Cup teams will each play four games before the field is seeded for the knockout quarter-finals. Games are scheduled to start at either 10:30 a.m. or 8 p.m. local time (12:30 p.m. and 10 p.m. ET).

Saturday's forecast calls for a high of 33 Celsius in the Salt Lake City although it dips to 20 degrees for the second day of play early next week.

"I'm a night-game kid of gal, but I think we're just raring to go and get the tournament started," said Scott. "The earlier (starts) out of the heat, I think, would probably be beneficial for everyone."

Scott has spent more than a decade on the senior international stage, making her Canada debut in February 2010. She has 156 caps to her credit.

This report by The Canadian Press was first published June 25, 2020.