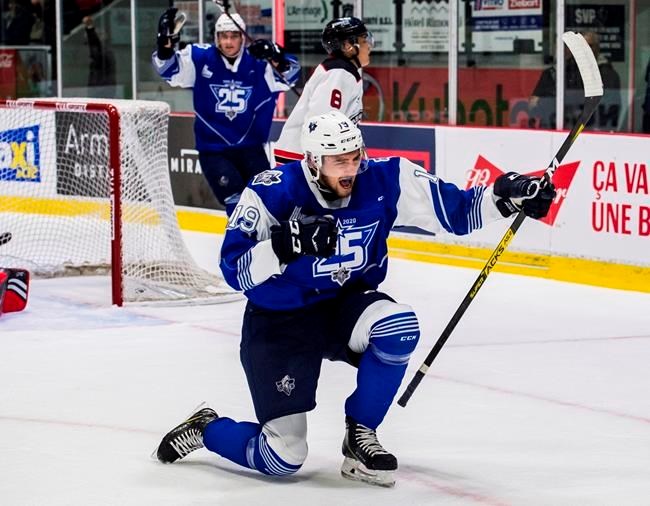 Rimouski Oceanic forward Cedric Pare has a lot on the line this season, including his future in hockey.

The 20-year-old Pare is in his last season of eligibility for the Quebec Major Junior Hockey League and still without an NHL contract despite being drafted in 2017.

But he's giving himself a strong chance to earn a deal and keep his dream alive with his play, leading the entire Canadian Hockey League in goals heading into Thursday night's action.

"I want to be a hockey player so it's a big year for me," Pare said. "I'm trying to enjoy it but also prove I can go to the next level."

Pare was on the right track to pro hockey when the Boston Bruins drafted him in 2017. But he went unsigned by Boston after two seasons, leaving him a free agent unsure of his future with only one ultimate year to prove himself, either to the Bruins or another NHL club.

"They still watch me. I don't know if they're still in contact (with my agent) but they didn't want to sign me last year," Pare said.

The six-foot-four, 212-pound left-handed centre has never produced the way he currently is, as he's already reached career-bests in goals with 30 and points with 60 in only 32 games.

Pare combined for only 35 goals in his three preceding seasons and surpassed his previous high of 17 only 13 games into 2019-20, when he had the first four-goal game of his career in a 9-2 win over the Quebec Remparts.

"I'm confident on the ice, the coaches, they have confidence in me and I try to play my best hockey night after night," Pare said.

Pare, whose younger brother Felix plays for the QMJHL's Victoriaville Tigres, isn’t the only 20-year-old in the Canadian Hockey League giving himself a strong shot at earning an NHL contract before the curtain closes on their junior careers, either.

James Hamblin of the Medicine Hat Tigers leads the Western Hockey League in scoring with 49 points in 31 games. Meanwhile, Sean Josling of the Sarnia Sting has 47 points in 28 games and Austen Keating of the Ottawa 67’s has 46 points in 27 games to sit sixth and seventh, respectably, in the Ontario Hockey League scoring race.

Pare has had the good fortune this season of centring Rimouski’s No. 1 line alongside top prospect Alexis Lafreniere, who could go No. 1 at the 2020 NHL Draft, and Dmitri Zavgorodniy, a Calgary Flames prospect who was on fire before going down with an injury in late November.

Before Zavgorodniy was sidelined, the trio sat 1-2-3 in league scoring and was arguably the most difficult line in the league to contain after crossing over the blue line. Lafreniere leads the QMJHL with 70 points in 32 games.

Pare, from Levis, Que., began his junior career with the QMJHL's Saint John Sea Dogs, winning a league championship and playing for a Memorial Cup in 2016-17. But Saint John went into rebuild mode after its run and shipped Pare to Rimouski the following summer for draft picks.

Rimouski currently sits fourth in the QMJHL with a 19-7-6 record despite losing Zavgorodniy for up to three months on Nov. 20 with a broken collar bone and Lafreniere to Canada's world junior selection camp.

The Oceanic won’t be back at top speed until close to spring, which is just in time for a post-season push. That keeps Pare optimistic about another chance at reaching the Memorial Cup – Canada’s major junior hockey championship.

"It's exciting," said Pare. "We got a good team so we’re working towards a big playoff. For sure we want to play hard along the way too."

Canadian Christine Sinclair on verge of soccer history at CONCACAF qualifier
Jan 28, 2020 10:58 AM