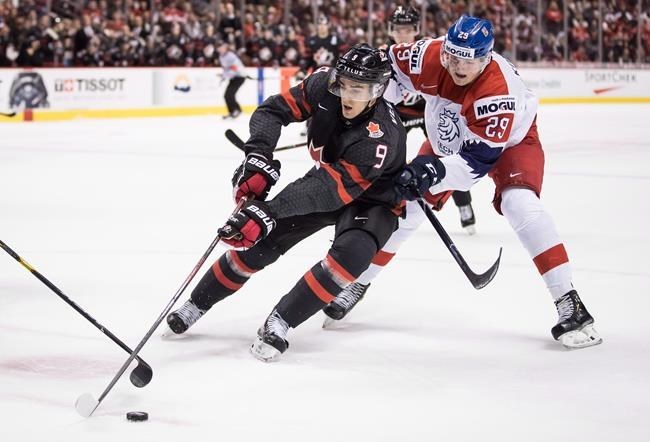 OAKVILLE, Ont. — Joe Veleno's path has been a long one.

From being the first player from Quebec granted exceptional status, to struggling early on in junior, to battling through adversity to find his game before making his professional debut this season, the centre has already seen a lot in his 19 years.

Now he'll be counted on to help lead Canada — both on the ice and in the locker room — at the 2020 world junior hockey championship.

Hockey Canada announced Monday that the Detroit Red Wings have released Veleno for the under-20 tournament that runs Dec. 26 to Jan. 5 in the Czech Republic.

He won't be at this week's selection camp just west of Toronto with the country's other 31 teenage hopefuls, but the sport's national body is happy to wait for his arrival after final cuts are made and the team heads to Europe for a series of exhibition games.

"You'd like to have your guys here, but it's not a priority," Hockey Canada head scout Brad McEwen said. "Detroit was gracious enough to allow him to play, and we're thankful for that."

Veleno's number don't jump off the page — he has three goals and nine points in 25 games this season with the Grand Rapids Griffins of the American Hockey League — but McEwen said there's lots to like.

"He's been playing good minutes in all situations," McEwen said. "He's been in our program so many times, and been a tremendous leader and mentor for our group. We're really excited that we got word that he's going to be part of it moving forward."

Selected 30th overall at the 2018 NHL draft, Veleno had two assists in five games in a limited role for Canada at last year's world juniors when the hosts finished a disappointing sixth in Vancouver and Victoria.

"We all love him," forward Akil Thomas said. "Obviously a huge addition. He's a great player and he's going to make the team a lot better.

A native of Kirkland, Que., Veleno joins a trio of already-announced returning players from last year's team — star winger Alexis Lafreniere, as well as defencemen Jared McIsaac and Ty Smith — as leaders of a Canadian roster that could be a lot younger than in years past.

Of the 31 players in camp, eight are NHL draft eligible for the first time, including three 17 year olds led by hulking centre Quinton Byfield.

"All of us have been captains or been leaders (with) Hockey Canada throughout the years," McIsaac said of the veteran core. "We're ready for that."

Canada opened its selection camp Monday evening in Oakville and will be back on the ice for two sessions Tuesday before playing exhibition games Wednesday and Thursday against a team of university all-stars.

The Canadians, who last won the world juniors two years ago in Buffalo, N.Y., have earned a combined 31 medals since 1977, including 17 gold.

Veleno has had an up-and-down career since becoming the first player from Quebec granted exceptional status to play in the Canadian Hockey League as a 15 year old back in 2015 — a full year before the rest of his age group.

He registered 43 points in 62 games as a QMJHL rookie and 40 in 45 contests during his second campaign. Veleno helped the Saint John Sea Dogs make the Memorial Cup in 2017, but was traded to the Drummondville Voltiguers the following December for five draft picks.

Still waiting to make his NHL debut, Veleno put up a combined 79 points in 64 games with the Sea Dogs and Voltiguers in 2017-18, and finally started to dominate in 2018-19 with 42 goals and 104 points in 59 outings as Drummondville made the league semifinals.

"He's a complete guy, he plays all the zones," McEwen said. "You talk about a 200-foot type player, that's what he is. He's probably rounded that side of the game out more."

Kirby Dach, 18, was expected to be available, but the No. 3 pick at the 2019 draft has five goals and 10 points in 24 games for the Chicago Blackhawks this season.

McEwen said the program will leave the door open as long as possible for Hayton, Dobson and Dach — including adding them to the roster after final cuts.

"We're certainly flexible. Those three players being in the NHL, we know how quality they are. We'll wait right until the last second if that's what it takes."

This report by The Canadian Press was first published Dec. 9, 2019.

Note to readers: This is a corrected story. A previous version had the incorrect start date for the world junior championship