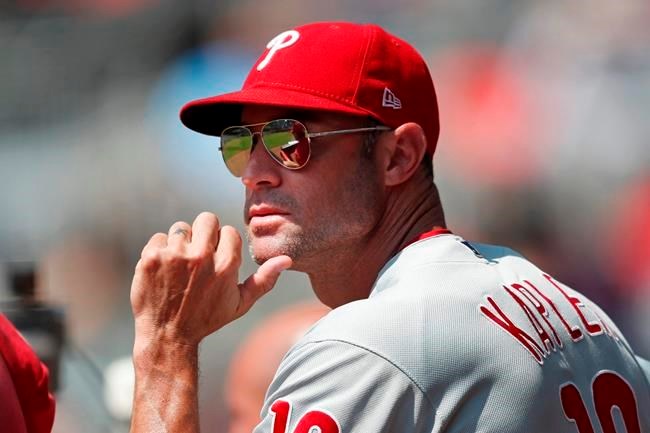 PHILADELPHIA — Gabe Kapler took the fall for the Philadelphia Phillies.

He was fired Thursday, nearly two weeks after a disappointing finish to a season of big expectations highlighted by Bryce Harper's arrival.

"Several years ago, I promised our loyal fans that I would do everything in my power to bring a world championship team to our city. I will never waver from that commitment," Phillies managing partner John Middleton said in a statement.

"I have decided that some changes are necessary to achieve our ultimate objective. Consequently, we will replace our manager. I am indebted to Gabe for the steadfast effort, energy and enthusiasm that he brought to our club, and we are unquestionably a better team and organization as a result of his contributions."

The Phillies were only two games behind in the NL wild-card standings after beating Atlanta on Sept. 18 but lost eight of the next nine, including a five-game sweep at Washington. They finished eight games behind Milwaukee for the second wild card and 16 behind the first-place Braves in the NL East.

Last year, the Phillies had a one-game lead in the division on Aug. 11 before going 15-31 the rest of the way.

"When we hired Kap, it was our goal to develop a positive, forward-thinking and collaborative culture throughout the organization that would allow us to compete with the best teams in the league year in and year out," general manager Matt Klentak said. "While we have fallen short in the win column for the last two years, I can confidently say that Kap's efforts have established a strong and sustainable foundation for this organization moving forward."

He added that in the coming weeks the baseball operations department will try to "find the right individual to build upon the existing foundation and bring a championship home to Philadelphia."

Injuries were a big reason why the Phillies failed to have a winning record for the first time since 2011. They lost leadoff hitter Andrew McCutchen for the season in June and six of their top seven relievers missed significant time. Free-agent addition David Robertson pitched just 6 2/3 innings and Pat Neshek and Tommy Hunter threw a combined 23 innings. Also, starting fielder Odubel Herrera played just 39 games before he was suspended for the rest of the season under Major League Baseball's domestic violence policy.

The team also announced pitching coach Chris Young, head athletic trainer Scott Sheridan and assistant athletic trainer Chris Mudd will not return. Hitting coach Charlie Manuel will return to his role as a senior adviser. The new manager will inherit the remainder of the coaching staff.

Despite adding Harper, McCutchen, J.T. Realmuto and Jean Segura, the was inconsistent, and the Phillies couldn't string together more than four victories in a row. Hitting coach John Mallee was fired and replaced by Manuel, a former manager, in August. The Phillies improved but couldn't overcome poor pitching.

The starting rotation struggled throughout the season and the injury-depleted bullpen was filled with minor leaguers and castoffs.

"We came into 2019 with very high hopes. We fell short of those, and that responsibility lies with me," Kapler said. "The next Phillies manager will inherit a team of talented, dedicated and committed players. There has been nothing more fulfilling in my professional career than the opportunity to work with the players on this team."

The Phillies began the season with a three-game sweep of Atlanta, and led the division for two months before falling behind the Braves in June. By the trade deadline, team President Andy MacPhail said he didn't think the club was one or two players away from World Series contention so Klentak made a few minor moves rather than dealing prospects for high-profile players.

Kapler wasn't popular in Philly because of his laid-back personality and new-school philosophy. He was heavily criticized for his use of analytics and unfairly ridiculed for being too positive in his assessment of his players.

Harper, Realmuto and other players backed their manager but management caved to public pressure.

"My hope is that I helped contribute to a developing culture in the organization that flourishes in the years to come," Kapler said. "I've come to care for this franchise and have the best wishes for this group in the future. The passion and devotion of the Phillies fan base both inspired and humbled me daily. It was an to grow, develop and learn with this team. I'm looking forward to what the future brings, and I know I'm a better leader and person for having had this opportunity."

The team's dismal pitching certainly wasn't Kapler's fault. The Phillies counted on Jake Arrieta, Nick Pivetta, Zach Eflin and Vince Velasquez to fill out a rotation led by ace Aaron Nola. Arrieta struggled and needed elbow surgery. Pivetta was demoted to the minors and moved to the bullpen. Eflin had had ups and downs and Velasquez couldn't pitch deep into games. Even Nola wasn't the same guy who finished third in NL Cy Young Award voting last year.

Klentak traded for Jason Vargas and signed Drew Smyly and added other pitchers off waivers. That didn't cut it. Still, Kapler took the fall for the team's shortcomings.