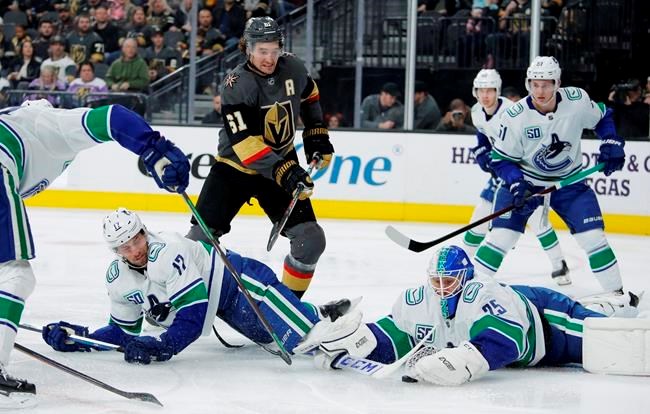 At the rate he's producing this season, the 12-year veteran is on pace to shatter that mark.

"I think I've gotten my opportunities pretty much the entire year," said, Pacioretty, whose career highs for goals and assists are 39 and 34, respectively. "I'm obviously playing on a really good line with two really good players and getting a ton of opportunities. That's kind of my job is to make sure that I finish those opportunities."

He did that twice in the third period to help ice the game for the Golden Knights, who recently lost of 10 of 13 but are now alone in second place in the Pacific Division, just one point behind Arizona.

Nick Holden, Valentin Zykov, Jonathan Marchessault and Mark Stone also scored for the Golden Knights. It was the fifth time this season Vegas had five different goal scorers in a game.

"That's a complete game from everyone in our group, from the goalie to the D-men ... a full group effort, it was a lot of fun," said Pacioretty, who scored for the fourth consecutive game, the second-longest goal-scoring streak of his career. "We know that we play a lot of important games, divisional games, teams that are right there in the wild-card race. Definitely important games for our group, we understand that, but at the same time we just worry about our game, which we have done pretty well recently."

Marc-Andre Fleury stopped 26 shots to improve to 12-2-1 in his career against the Canucks. The last time Fleury lost to Vancouver in regulation was 2006.

To the delight of the announced gathering of 18,066, Fleury had his typical highlight-reel saves of the game. The first came in the second period against Josh Levio, who came out of the penalty box and ended up on a breakaway, but the 16-year veteran goaltender's diving poke check thwarted the effort. The second came in the third period, when he quickly slid across his crease to stop Elias Pettersson from making it a one-goal game.

"Those are fun ones, I think when you're a goalie, you can dive around and make sliding saves," said Fleury, who also got career win No. 452, two shy of Curtis Joseph for sixth all-time. "They're the ones I smile more, I have more fun doing. Obviously it's a lot more fun when they don't go in the net."

Pettersson, Brock Boeser and Jake Virtanen did find the back of the net against Fleury, while Jacob Markstrom made 34 saves to fall to 1-6-1 in his career against the Golden Knights. Michael DePietro replaced Markstrom late in the third period and allowed one goal on seven shots.

The Canucks, who played the second of a back-to-back after a 4-2 loss in San Jose on Saturday, dropped to 6-12-4 when their opponent scores first and 2-10-1 when trailing after the first period.

"It's well known you don't want to give up the first goal in the league," Vancouver coach Travis Green said. "It's hard to come back in this league. But I think that was the least of our worries tonight. We weren't very good."

Vegas improved to 8-0-1 all-time against Vancouver and has now scored 11 goals in their last two home games - the most they've scored in two straight home games this season.

"We like to play well in this building and get the fans behind us and scoring first really helps us," Vegas coach Gerard Gallant said. "I thought we played an excellent game tonight. Guys are scoring some big goals and of course scoring a lot of goals tonight. I think we played a good all-around game."

NOTES: The Golden Knights played their 200th all-time regular-season game. ... Vegas owns the second-best record (111-69-19) in NHL history by a franchise through its first 200 games, trailing only the original Ottawa Senators. ... The Canucks made several transactions earlier in the day, placing forward Sven Baertschi on waivers, reassigning forward Zack MacEwen to the Utica Comets, and activating forward Tyler Motte from injured reserve. ... Fleury played in his 821st game and passed Sean Burke for 14th place in NHL history. ... Stone's goal extended his point streak to four games. ... The Canucks dropped to 1-8-2 when they allow four or more goals, and 4-13-2 when they score three or less.