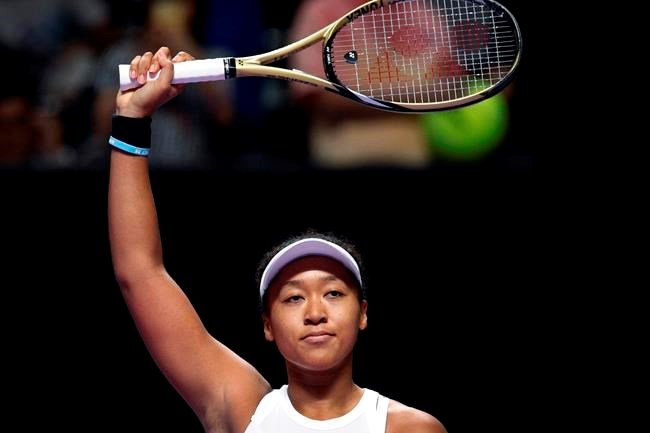 SHENZHEN, China — Top-ranked Ashleigh Barty of Australia rebounded from a set down to win her debut match 5-7, 6-1, 6-2 over Belinda Bencic of Switzerland at the WTA Finals on Sunday.

Barty's victory is her 53rd of the season, second most this season after Kiki Bertens with 54.

The 5-foot-5 Barty is a surprisingly potent server and ended her first career encounter against Bencic, also playing in her first year-end final, with her 10th ace of the match.

"I served particularly well at times, and that was the key for the second and third sets," Barty said. "I'm a little bit of a shorty but not that much. I've always wanted my serve to be a weapon."

Bencic admitted she was troubled by Barty's serve.

"I think her serving is what really makes the difference because it's more like a guy's serve than, yeah, a woman's serve," Bencic said. "It's a little bit different.

"I think most I was troubled by her serve."

Earlier, Naomi Osaka extended her winning streak to 11 matches after defeating Petra Kvitova of the Czech Republic 7-6 (1), 4-6, 6-4 in the first of three round-robin matches on the day.

Osaka, the Australian Open champion, arrived in Shenzen having won the last two tournaments she played — in Osaka, Japan, and Beijing.

"Given that I do feel I'm a big-match player, there are some times when I play higher-ranked people and I don't do that great," said Osaka. "So I feel like this tournament is a big challenge for me.

"I think I'm not even really thinking of this tournament as the Finals, I'm just trying to continue on from where Beijing left off."

The two-time Grand Slam champion failed to take advantage of two match points when serving at 5-2 in the third, but nailed down the victory on a third match point when serving in the 10th game.

Kvitova surrendered the encounter when she sailed a backhand crosscourt wide on the final point.

"I know how Naomi is playing, how confident she is from the past weeks when she played well in Asia," Kvitova said. "So I did expect really tough match.

"She was just better in the break points, in those important points."

The only other time Osaka played Kvitova was when the Japanese player captured this year's Australian Open final by a score of 7-6 (2), 5-7, 6-4.

"It definitely feels good to win," Osaka said. "I think more just because I played against her, and I haven't played her since (the) Australian Open.

"I didn't really have the best memories. Like I didn't want it to be that close again, but I think it was close again today."

Osaka's debut at the year-end final last year in Singapore ended in disappointment when she lost all three of her round-robin encounters.

The 29-year-old Kvitova, the oldest player in this year's eight-player field, is competing in her seventh WTA Finals. She won the year-end title in her first appearance in 2011, and was also a finalist in 2015.

The standings in the Red Group have Barty and Osaka at 1-0, and Bencic and Kvitova at 0-1 after the first day of action.

In the doubles tournament, Ottawa's Gabriela Dabrowski and partner Xu Yifan of China lost to the Czech team of Barbora Krejcikova and Katerina Siniakova 6-4, 6-2.