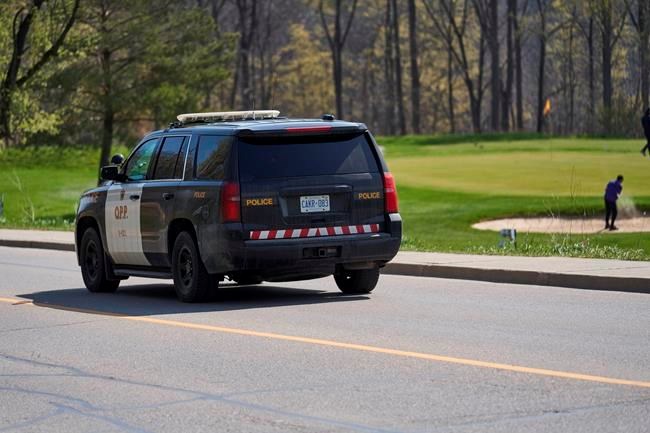 Health Minister Christine Elliott said the province currently has no timeline for the reopening of facilities such as tennis courts and golf courses.

"We need to limit our mobility as much as possible to reduce transmission and we are going to be assessing this," she said.

"But for right now we will need to continue with those measures in place to reduce mobility and reduce transmission."

Elliott noted that although there were 2,791 new cases reported in Ontario on Tuesday — the lowest in weeks — the case total could rise again.

She also said the number of COVID-19 hospitalizations and patients in intensive-care units would have to go down and a backlog of surgeries would have to be worked through before the ban on outdoor sports and other restrictions can be lifted.

"There isn't an exact rate at this point but our medical experts are telling us that we need to see a continued reduction before we can start thinking about opening things up again," she said.

The province brought in the ban on outdoor recreational facilities in April, when it extended a stay-at-home order and imposed further restrictions amid soaring cases.

Its science advisers have criticized the restriction of outdoor activities, saying they will not control COVID-19 and disproportionately harm children and those who don't have access to their own green space.

Some facilities have been flouting the rules and taking on the consequences.

The Bridges at Tillsonburg golf course announced it was closing temporarily after some of its players were charged under the restrictions.

"The Bridges at Tillsonburg would like to thank the hundreds of golfers and citizens who have supported us during our ‘opening in protest’ of the lockdown measures taken against golf courses," reads a post on the course's website.

"Despite strong local support and support throughout the province, the enforcement by the provincial government has been overbearing. The threats and fines have adversely affected our ability to continue playing golf safely."

Sport Minister Lisa MacLeod said she had been meeting with representatives of the golf community but didn't expect courses to be allowed to open soon.

"I do not see changes happening imminently, but will continue to work with our stakeholders and our public health officials to ensure a return to play, as soon as it's safe to do so," she said in a statement.

Mike Kelly, the executive director of the Golf Association of Ontario, said that his organization has had productive conversations with the province but he believes courses are safe and should be allowed to open.

"We also understand that mobility remains a concern of health officials and it should be encouraging that the clear data supports that golfers are not travelling across the province to play a round of golf," he said.

"They are looking to play their local golf course in their home community for the physical and mental health break that the sport provides."

Members of the tennis community have also been pushing for a change to the rules.

James Boyce, president and CEO of the Ontario Tennis Association, said that while he supports the government's measures, he's eager for people to return to tennis once it's safe to do so.

"We have everything in place to make the tennis experience safe," said Boyce, who had a meeting with government officials Tuesday.

Boyce noted, however, that the prolonged closure of outdoor recreational facilities could have an impact on people's mental health.

"We're indoors, we're not socializing, we're not hugging each other," said Boyce. "I think once we get out of May, if everything goes as planned, I think we should be in pretty good shape. Tennis people are just going to have to get through May."

Paul Miller argued that outdoor activity is important for mental health and that many small businesses have been negatively impacted by the ban.

"All the experts were recommending that outdoor recreational activities should be open," he said.

"It's nonsense to me that volleyball courts, golf courses, tennis courts, basketball, etc., were on lockdown."

Canadian featherweight Felicia Spencer gets new opponent for May 22 UFC card
May 8, 2021 10:50 AM