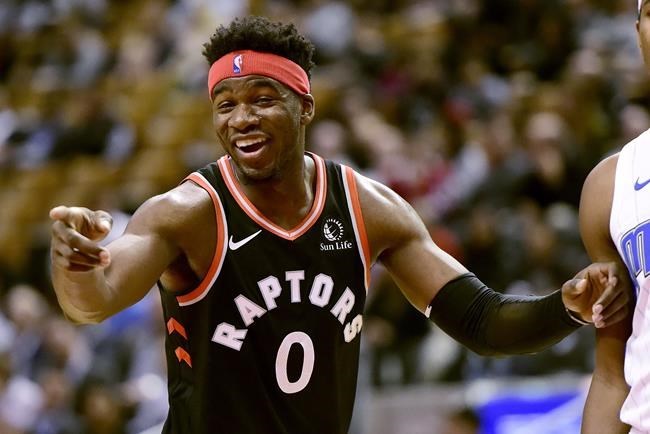 TORONTO — Kermit Davis didn't coach Terence Davis in his rookie season at the University of Mississippi. But he sure knows the player's scoring average from that year.

"TD averaged one point a game as a freshman at Ole Miss. One," said the coach, who was hired by Mississippi ahead of Davis's senior season.

Davis, the player, has been a revelation through his 14 games as a Raptor. The rookie, who went undrafted and unheralded, set career highs in back-to-back games this week, scoring 16 and 19 points respectively while injecting a massive boost of energy off the bench.

The 22-year-old player has turned some heads in his short Raptors' career. Don't count his former coach's among them.

"TD didn't blame anybody (after his inauspicious freshman year), he just went to work," Davis said. "Then when I coached him, I knew he was going to keep making so much progress . . . and then too see the progress since he left us, from playmaking to basketball IQ, you can just tell the Raptors have done such a great job with him so far.

"He's one of those guys who's going to absorb everything. He wants to be coached. I just knew that his progress was just going to keep going up, up and up."

The six-foot-four, 200-pound combo guard excelled at both basketball and football in high school, receiving more than 20 scholarship offers for football. General consensus: Davis would have made a fine NFL wide receiver.

"When I committed to college, I chose basketball. I wanted to prove everyone who thought that I chose the wrong sport wrong," said Davis, who received just five scholarship offers for basketball. "So far I've been doing that. My whole career playing basketball, I'm still out to continue to do it."

Are there football skills that transfer to basketball?

"Just the physicality, man. You have to be a whole different person to play the game of football. I understand that now. Football is a different game," Davis said. "And just being alert. But physicality, the most. That's why I get fouls so much of the time. Because I use my hands."

Raptors guard Fred VanVleet hasn't seen footage of Davis playing football, although plenty people have told him he should. But he can tell the players who come armed with football experience.

"It's just a physicality," VanVleet said. "It's nothing crazy, but the fear of somebody hitting your chest or getting hit in the ribs, the fear of that is a lot worse than the actual hit you take, and you don't really learn that unless you play football or you're just a rough basketball player.

"So you can see the guys that go up there for rebounds with two hands who are not afraid to dive for the ball or not afraid to throw his body around. He's been hit before, like hard, for real, playing football. You can always tell the guys who have been through that."

Kermit Davis left Middle Tennessee to coach at Ole Miss ahead of Terence Davis's senior season. Ole Miss was coming off a horrible season, finishing last in the SEC Conference. Davis the player was testing the NBA draft waters. Davis the coach could have focused on rebuilding.

"But the very first team meeting that I had. . . I looked right at TD and I said 'TD, we can't talk about rebuilding, that's not fair to you, you've got one year,'" the elder Davis said from Oxford, Miss., this week. "TD sat on the edge of his seat, and nodded with the best body language. (Our relationship) stayed that way the whole year. . . And then he led us to the NCAA tournament."

At March Madness, Davis had a team-high 17 points and six assists in the Rebels' first-round loss to Oklahoma.

Despite an excellent NBA draft combine showing, Davis went undrafted, and passed on potential two-way contracts — which see players earn much lower salaries and spend the bulk of the season with a franchise's G League affiliate.

"I called TD the next day and he said 'Coach, I'm gonna bet on myself. I think I deserve a fulltime roster spot,'" Kermit Davis said. "And gosh, he bet on himself, and he sure won. And so good for him. He took a great chance on himself and then played so great in the summer league."

Davis, who signed a two-year deal with Toronto, is at home on a team of virtual draft-night nobodies. VanVleet, Malcolm Miller, Matt Thomas, Chris Boucher and two-way players O'Shae Brissett and Shamorie Ponds all went undrafted. The Raptors have just one lottery pick on their roster: seldom-used Stanley Johnson (8th to Detroit in 2015).

"It just tells you about those individuals, what type of people you're around," Davis said of his undrafted teammates. "It's the hunger to be great."

Davis is also the latest in a long line of fourth-year players the Raptors have signed. While a youth movement dominates the NBA draft, the Raptors have zero qualms about older players in a league of "grown men" said Raptors head coach Nick Nurse. "A lot of the battle really starts physically."

"They say the NBA guys' prime is 27, 28, 29, but you think how many great games (Terence) was in at Ole Miss in the SEC for four years, that's a lot of experience, and so when he gets put in those great atmospheres in the NBA, at least he's been in those kind of big games before," he said.

The coach is keeping close tabs on his former player's progress, through highlights and boxscores. In fact, it seems most of Southaven, Miss., where Terence grew up, is cheering him on.

"The people here, they love TD, you can't imagine how in the state of Mississippi and at Ole Miss how they love that guy, because he dearly loved his school," the coach said. "How he took time with every person, every fan, every child that wanted his autograph, pictures, he's the most humble person. And so he's got a ton of people in this part of the country following every game he plays."

The Raptors are in Atlanta (4-10) on Saturday, one of just two road games in a nine-game stretch. Toronto is an impressive 10-4 despite missing Kyle Lowry and Serge Ibaka for the past six games.

Nurse said he believes Ibaka (ankle) will be back next week, while the targeted date for Lowry (fractured left thumb) is Dec. 1.

This report by The Canadian Press was first published Nov. 22, 2019.

Note to readers: This is a corrected story. A previous version incorrectly attributed a quote to Nick Nurse instead of Fred VanVleet