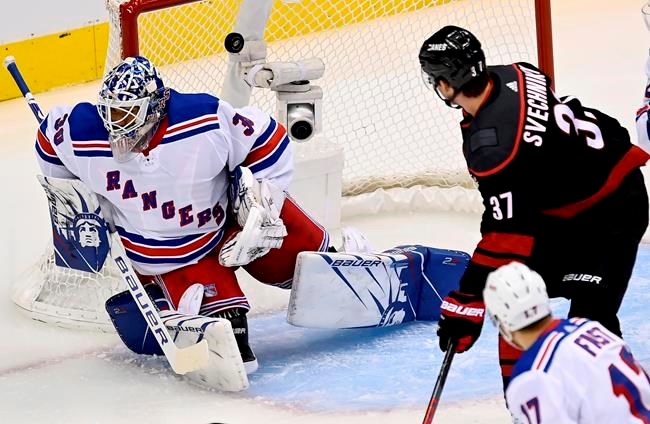 TORONTO — A big unknown ahead of the NHL's restart to its pandemic-hit season — the most unusual campaign in league history — was how playing inside empty, cavernous arenas in the middle of summer would impact the game.

Normally used to rabid, emotional crowds hanging off every goal, save or hit when everything's on the line, would players be able to self-motivate?

The Stanley Cup remains the ultimate prize, of course, but with fans forced to watch slick, made-for-television productions at home because of COVID-19, there was genuine concern the on-ice product might be devoid of energy and passion.

Exactly 142 days after the novel coronavirus forced a suspension of the schedule, the Carolina Hurricanes and New York Rangers went toe-to-toe in a barnstorming opening three minutes that saw a huge bodycheck, the NHL's first-ever August goal and a spirited fight as the league's 24-team resumption kicked off in frenetic fashion.

"We've all had a lot of time to prepare," said Hurricanes head coach Rod Brind'Amour, whose team picked up a 3-2 win in the first of five qualifying round contests that headlined the league's curtain-raiser. "The guys were ready to play something for real.

"We haven't had that opportunity in a long, long time."

Carolina defenceman Brady Skjei rocked New York winger Jesper Fast with a massive hit inside the first minute before Jaccob Slavin scored after just 61 seconds. Hurricanes winger Justin Williams and New York centre Ryan Strome then dropped the gloves inside a frigid Scotiabank Arena, which had a drastically different feel compared to the 28 C temperatures outside.

"There's just a lot of pent up energy from a lot of players," Williams said. "Months without playing a meaningful hockey game is tough for professional athletes.

"Both teams had a lot of intensity."

In other action, Mike Smith allowed five goals on 23 shots before he was yanked as the Oilers suffered a disastrous 6-4 loss to the Chicago Blackhawks in Edmonton — the game wasn't nearly as close as the scored indicated — while the New Islanders beat the Florida Panthers 2-1 in Toronto.

The late matchups saw the Montreal Canadiens stun the heavily-favoured Pittsburgh Penguins 3-2 in overtime, and the Calgary Flames down the Winnipeg Jets 4-1 as the season resumed in two Canadian hub cities.

Minnesota Wild defenceman Matt Dumba spoke prior to the Oilers-Blackhawks game before becoming the first NHLer to take a knee during "The Star-Spangled Banner" in a nod to social justice movements.

"Racism is everywhere," Dumba said on behalf of the recently-created Hockey Diversity Alliance. "And we need to fight against it."

"It was a great speech," Oilers captain Connor McDavid said. "It was great that everyone came together like that ... lots of things need to change."

The eight teams that advance from the best-of-five qualifying round will join the top-4 seeds in each conference as part of the usual 16-slot playoff bracket. Edmonton will host the conference and Stanley Cup finals, which could stretch into early October. The 2020-21 season is tentatively scheduled to begin in December, but could also be pushed back to January.

While television viewers had crowd noise pumped into broadcasts, hearing both benches celebrate big moments or complain about a perceived injustice over a dull din of canned fan reaction coming through arena speakers sometimes made proceedings sound more like a hard-fought beer league game than an NHL post-season matchup.

Eight massive screens were suspended from the rafters of both Scotiabank Arena and Edmonton's Rogers Place to give the venues a post-apocalyptic feel, while the first dozen rows of the lower bowls were covered in tarps with the NHL's logo, along with each hub city's name, in capitalized letters.

Arena staff wore masks, while cleaning crews wiped down the benches between periods as part of the league's robust health and safety precautions — a reminder that while Canada is in a better situation than many countries with regards to the virus, most notably the United States, the world is still in the midst of a pandemic.

And although COVID-19 is the reason hockey's being played in the middle of summer in Toronto and Edmonton inside tightly controlled secure zones — or "bubbles" — separate from the general public, the world is a vastly different place in at least one other way.

Mass demonstrations demanding social justice, racial equality and an end to police brutality exploded across the U.S. and elsewhere after George Floyd, a Black man, had his life taken by a Minneapolis officer in late May.

A number of high-profile NHLers spoke up in the aftermath — something far outside the norm in an often-buttoned-down sport — with some even taking part in marches.

The league hung banners at each end of Scotiabank Arena and Rogers Place as part of its #WeSkateFor campaign with "Black Lives" as the tag line. The league is also giving a nod to front-line workers battling the virus.

As the Oilers skated out to start their game as the designated "home" team in Edmonton, the scoreboard over centre ice played a montage of highlights accompanied by sirens, swirling spotlights and pounding music.

"Here come yourrrrrr Edmonton Oilllllllers," the announcer called out to no one in particular.

The players gathered around the centre ice circle for the national anthems — the Oilers on one side and the Blackhawks on the other as a tribute to diversity, social justice advocates and front-line workers played.

Dumba then walked out and gave his speech urging unity against discrimination of minorities.

"Hockey is a great game," he said. "But it could be a whole lot greater."

Dumba kneeled at centre ice during "The Star-Spangled Banner" as Chicago backup goalie Malcolm Subban and Edmonton defenceman Darnell Nurse, who are both Black, stood beside him with their hands on his shoulders.

"I just wanted to show support," Nurse said. "We're all fighting the same fight. It's good the message was heard and needs to continue to be spread.

Four-time Grammy winner Michael Buble then performed a pre-recorded version of "O Canada," which saw Dumba return to his feet.

In Toronto, the NHL unveiled a video those involved in racial justice issues and front-line workers prior to the anthems of the game between Montreal and Pittsburgh.

"When an issue is bigger than the game, we must speak out starting with three words we need to get comfortable saying — Black Lives Matter," the narrator said. "We must be clear about what we skate for. We skate for black lives. And even in an empty arena, we never skate alone.

"Together, we must be part of the movement to end racism."

Unlike the NBA's resumption of play near Orlando, Fla. — which has seen many players and coaches kneel for the opening games of basketball's restart in support of social justice — or Dumba's move in Edmonton, no players protested the anthems in Toronto, which included another Buble rendition of "O Canada" prior to the Canadiens and Penguins squaring off.

While bars were modestly busy around Rogers Place, the feeling outside Scotiabank Arena was nothing like the leadup to a regular post-season matchup. Patios were mostly quiet, while Maple Leaf Square — a place where fans usually gather to watch important games on a massive screen — was inside the league bubble and off limits.

These are indeed strange days.

"You notice it when you're on the bench," Hurricanes centre Sebastian Aho said. "There's no crowd and no noise.

"It's a little different."

In a lot of ways, though, what happened on the ice between the whistles looked and felt the same.

— With files from Dean Bennett and Donna Spencer in Edmonton.

Ticats, Blue Bombers to open CFL's return minus some notable performers due to injury
Aug 4, 2021 3:49 PM