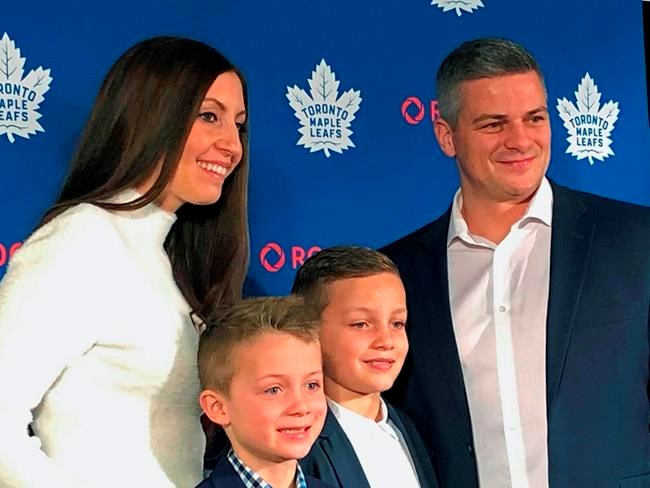 There's a lot for his new team to learn and not much time to do it.

The 39-year-old Keefe is now in charge of the Maple Leafs after veteran coach Mike Babcock was fired Wednesday with the team mired in a six-game losing streak.

Keefe was officially introduced Thursday morning as the 31st head coach in Maple Leafs history. He's got a long history with general manager Kyle Dubas, who hopes Keefe is the right choice to help Toronto bounce back from a disappointing 9-10-4 start.

Keefe believes it can be done.

"We've got a lot of talent and the ability to make life hard on the other team in a lot of ways," he said. "Focusing on that, we believe, will produce positive results. Because the players are good enough for that to happen."

Tavares said there were "many mixed emotions" because Babcock was so dedicated and committed to the team. He said the team feels a burden because it hasn't played up to expectations but is "turning the page" and moving forward.

"Sheldon's got a great mind for the game," Tavares said. "We're excited about the energy and the things he's bringing and trying to improve from where we're at."

Keefe was set to make his coaching debut in Toronto's game against the Arizona Coyotes on Thursday night.

Dubas said the franchise must show patience as Keefe, a first-time NHL coach, embarks on the difficult task of taking over a team midseason and trying to quickly turn things around.

He's confident the players understand there will be ups and down.

He's also aware that outside perception might be a little less forgiving.

"It's all part of what makes working and playing in Toronto great," Dubas said. "You can't go anywhere in Toronto without people caring deeply about the team. I read the greatest quote this morning on the way here: 'You can look at it as a burden or look at it as a trampoline.'"

Toronto is a team that needs quite a bounce.

The 56-year-old Babcock went 173-133-45 in his four-plus seasons with Toronto and made the playoffs the past three years, though the Maple Leafs lost in the first round each time. When the team started slowly this season, Dubas and team President Brendan Shanahan knew it was time for a change.

Shanahan flew to Arizona on Wednesday to break the news to Babcock, whom he hired in 2015.

He acknowledged it was a hard day. Some more hard days may follow as Keefe tries to quickly implement his system, though the franchise is confident it's headed in the right direction.

Keefe was in his fifth season as head coach of the American Hockey League's Toronto Marlies. He was 199-89-31 with the Marlies and helped the franchise win its first Calder Cup championship in 2018.

Several of the Leafs' current players were coached by Keefe when he was with the Marlies, which is the franchise's top minor-league affiliate.