Names keep being added to Jays' injury list as team fights to stay around .500 mark 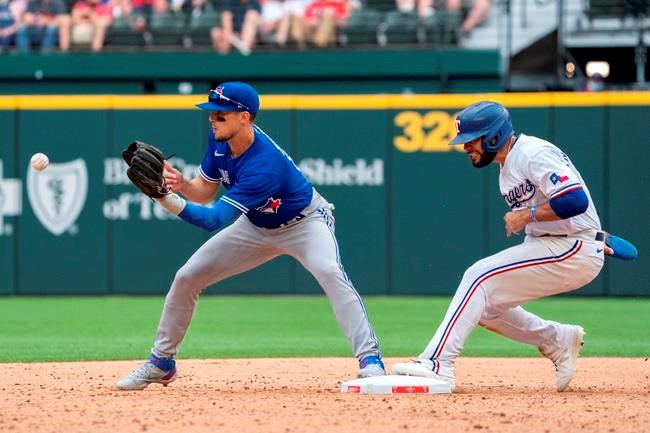 The Toronto Blue Jays have done well to hover around the .500 mark despite an ever-growing injury list that has hindered the roster over the first couple weeks of the season.

The pitching staff has felt the brunt of the injury woes, with starters and relievers seemingly going down by the day. In addition, star outfielder George Springer has yet to make his Blue Jays debut and now infielder Cavan Biggio is nursing a hand injury suffered in Thursday's loss in Kansas City.

Manager Charlie Montoyo has been forced to adjust on the fly over the first few series with his team set to take a 6-7 record into the opener of Saturday's doubleheader at Kauffman Stadium.

"I believe we have enough (depth)," Montoyo said. "We have enough to win and hang in there until everybody gets healthy. It's part of the game and we don't have any control over that."

Rain forced the postponement of Friday night's game between the Blue Jays and Royals.

The teams will play two seven-inning games as part of an afternoon twinbill. An update on Biggio's status is expected Saturday.

The optimistic glow that hovered over the Blue Jays after some splashy off-season moves and a quality pre-season was somewhat minimized on the eve of the campaign. General manager Ross Atkins started a late March media availability with an extended injury update.

Closer Kirby Yates had a serious elbow problem. Starter Robbie Ray bruised his elbow after falling down some stairs. And Springer, the team's new US$150-million man, had an oblique issue.

With Nate Pearson (adductor strain) and Thomas Hatch (elbow impingement) already out, it was a tough news day for Canada's only MLB team.

The injury announcements kept coming once the season began.

Springer was close to a return when a quadriceps strain -- suffered while running the bases -- derailed his plans. Teoscar Hernandez, Ryan Borucki and Lourdes Gurriel Jr., have all spent time on the COVID-related injured list.

Despite the challenges, the Blue Jays won four of six games against the New York Yankees, pegged by many baseball observers to be the favourite in the American League East.

Toronto ace Hyun-Jin Ryu has been strong while Vladimir Guerrero Jr., Bo Bichette and Randal Grichuk are  also enjoying impressive starts. Starter Steven Matz has emerged in the rotation and the bullpen has been decent considering the flux.

""You can never have enough (depth)," Montoyo said. "It's funny how baseball works. That's why it's always good to have other pitchers. But that's how it goes. There's not going to be any excuses."

The five-man taxi squad in use this season due to the pandemic has helped provide some backup options. Anthony Kay was called up Thursday from the club's alternate training site to start the series opener against the Royals.

The upcoming schedule should also help matters with four off-days spread out over the next two weeks.

This report by The Canadian Press was first published April 16, 2021.