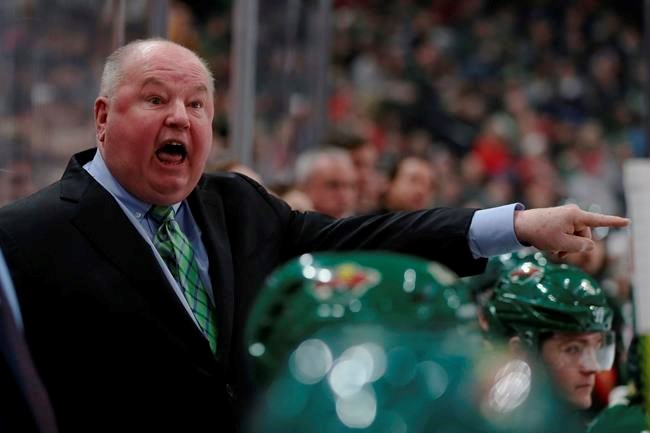 The Minnesota Wild fired coach Bruce Boudreau on Friday with the goal of correcting some inconsistencies and making a late-season push for a playoff spot.

First-year general manager Bill Guerin said he felt the timing was right to move on from Boudreau and replace him with interim coach Dean Evason despite the Wild having won seven of their past 11 games. Boudreau was fired in the aftermath of a shootout loss to the New York Rangers.

This is the eighth coaching change in the NHL this season, and Boudreau is the sixth fired for team performance reasons. That matches the most for one season in NHL history, according to the Elias Sports Bureau.

Minnesota is 27-23-7 and three points out of a playoff spot in the Western Conference with 25 games left. Guerin hopes a “new voice” from Evason helps the Wild return to the playoffs.

"This is all a matter of just winning games down the stretch," Guerin said. “I expect this team to compete for a playoff spot.”

Boudreau, 65, was in his fourth season with the Wild. He had been hired by Chuck Fletcher, who has since been fired and joined Philadelphia as its GM. Boudreau took Minnesota to the playoffs in his first two seasons there.

Guerin took over last summer following the firing of one-season GM Paul Fenton. He said it was not his intent from the time he got the job to fire Boudreau.

“We had a good working relationship and we got along as people, as well,” Guerin said. “I like Bruce. He’s a good guy and I planned on seeing it through. I came in with an open mind and didn’t have a decision made. This was just something that’s been on my mind for a little while and I felt like today was the day.”

Boudreau is in his 13th season after previously coaching the Washington Capitals and Anaheim Ducks. His team has made the playoffs in 10 of 12 full seasons, and his 567 wins rank 22nd.

Evason is in his second season with the Wild after coaching the American Hockey League's Milwaukee Admirals the previous six years. He was an assistant under Boudreau for parts of five seasons in Washington.

Guerin said the front office will conduct a search for a full-time coach once this season is over. For now, it's Evason's team.

“Dean has his own thoughts and beliefs and what he believes is going to give us success,” Guerin said. “I have full confidence in him. The one thing I really do like about Dean is his passion, his fire for the game. I am hoping that that translates to the players.”