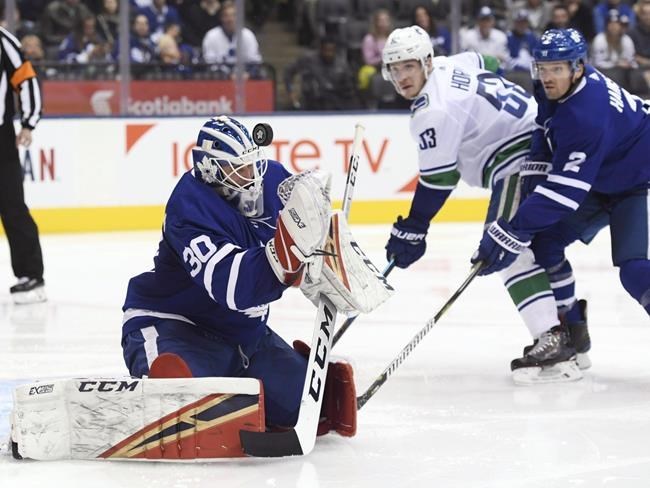 The Leafs announced Friday they have loaned winger Trevor Moore and goalie Michael Hutchinson to the Toronto Marlies.

Moore split time between the Leafs and Marlies this season, registering two goals and six assists in 25 NHL games. He added 39 points (23 goals, 16 assists) in 46 AHL outings. The 24-year-old from Thousand Oak, Calif., also scored once while suiting up for all seven games of the Leafs' first-round playoff loss to the Boston Bruins.

Acquired from the Florida Panthers for depth in the crease in late December, Hutchinson was 2-3-0 with a .914 save percentage and a 2.64 goals-against average with the big club.

The 29-year-old, who was recalled to serve as the Leafs' backup late in the season with Garret Sparks struggling, was 14-7-1 with a .910 save percentage and a 2.70 GAA for the Marlies.

Toronto swept the favoured Rochester Americans in a best-of-five series to open the AHL playoffs. Last season's Calder Cup champions, Toronto kicks off the second round at home against the Cleveland Monsters on Wednesday.

The Leafs also loaned defenceman Calle Rosen to the Marlies earlier this week.

Hockey equipment manufacturer CCM and its players donate half a million masks
Apr 8, 2020 9:43 AM