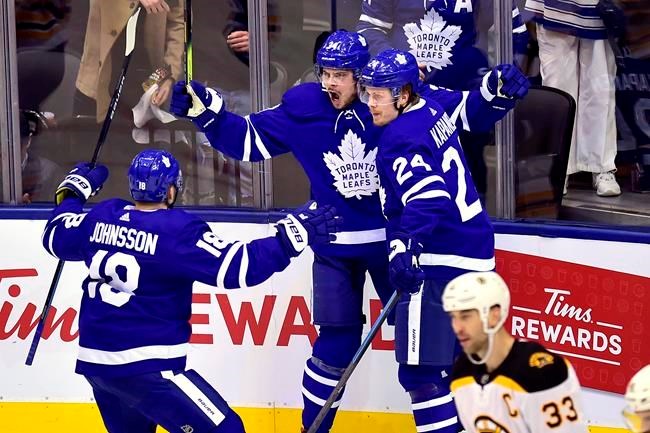 The Maple Leafs winger scored twice — including the overtime winner — in his second NHL post-season appearance in Game 2 against the Washington Capitals two years ago.

Then with Toronto and Boston tied in the second period of Game 7 last spring, the speedster outmuscled Brad Marchand before moving in on a short-handed breakaway and deftly deking Bruins goalie Tuukka Rask to briefly put the Leafs up 4-3.

In these playoffs, however, where the expectations and attention have been far greater, Kapanen has struggled.

Heading into Game 5 of Toronto's Eastern Conference quarterfinal rematch with Boston on Friday, and despite playing on a line with star centre Auston Matthews, he had failed to find the scoresheet.

The only other Leafs forward without a point was fourth-liner Frederik Gauthier, who's averaged more than 10 fewer minutes of ice time a game.

"I've got a lot more to show," Kapanen said after Friday's morning skate. "I've just got to keep working hard and staying positive. It's playoff hockey, right? You can't get too high or get too low.

"You've got to stay in the middle there. That's what I'm trying to do."

The 22-year-old Finn was one of seven Toronto players to register 20 goals this season, to go along with 24 assists, in 78 games. But he's scored just once over his last 19 outings — in the Leafs' meaningless finale to the regular season schedule against Montreal — and added two assists.

Also a penalty killer, Kapanen was on the ice for three of Boston's five power-play goals coming into Friday, and was partly at fault on Charlie McAvoy's opener with the man advantage in Game 4, which the Bruins won 6-4 to even the series 2-2.

"I've got room to improve," Kapanen added. "The goals or the points haven't come, but I don't think that's the main issue. I can play a bit harder, be better with the puck.

"Defensively, too, there's some areas."

He's made an effort on the forecheck, tying for third on the team in hits with 12, and leads Toronto forwards with four shot blocks.

"When it's not going in for you and it's a little hard playing with the puck, you focus on other things," said Kapanen, whose father Sami had a long NHL career. "It hasn't been the easiest four games of the series, but (I've) just got to keep going out there and working hard."

Leafs head coach Mike Babcock said that despite the numbers over this stretch, he's liked Kapanen's recent performances that include 20 shot attempts against the Bruins, 11 of which that have hit the target.

"He had a real dip, and then he's really come on," Babcock said. "He's been physical, he's been quick. When you jam everything together, you can paint any picture you want.

"He needs to continue to do that and be physical and shoot the puck — throw it in from wherever he's at."

The suspension of Nazem Kadri for the rest of the first round also means Babcock has limited options when it comes to line juggling. William Nylander, who's spent a lot of time alongside Matthews, has had to slide to centre on the third unit instead of potentially replacing Kapanen in Toronto's top six.

Kapanen, Matthews and Andreas Johnsson haven't been able to create as much at even strength in the congested playoffs as they did in the regular season when the trio got a lot of looks off the rush.

"When we're out there five on five it's pretty even," Kapanen said. "A lot of stuff has been happening on the power play and the penalty kill.

"Five on five it's tough, but I still think I can do a better job of getting myself free and be in front of the net tipping pucks."

The good news for Kapanen is this year's script against Boston, which 12 months ago eliminated Toronto at the same stage, has yet to be fully written.

"It's been OK," he said of his performance. "Lucky enough we've still got some games left."