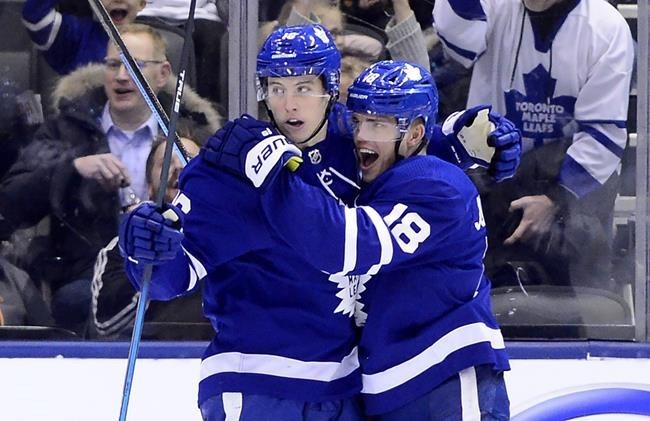 TORONTO — Andreas Johnsson is back in a crowded Toronto Maple Leafs sick bay.

Head coach Sheldon Keefe announced Friday the 25-year-old winger requires surgery on his right knee and will be out of the lineup at least eight weeks.

Johnsson, 25, was hurt in the first period of Thursday's 3-2 home loss to the Dallas Stars on a collision with teammate Kasperi Kapanen.

"It does present challenges," Keefe said on a conference call with reporters. "It affects your depth."

In other injury news, the rookie coach added that defenceman Morgan Rielly should be able to put weight on his broken foot and begin the rehab process "in a week or so" after suffering the injury Jan. 12. The team is targeting late March for his return.

The Leafs, who just got No. 1 goalie Frederik Andersen back from a neck issue that cost him four games, are also currently without defenceman Cody Ceci (ankle) and winger Ilya Mikheyev (wrist laceration).

"It's part of the game and it's part of the league," Keefe said of the injuries. "Everybody goes through it. For the most part, most of the teams we're playing are going through similar types of things."

Johnsson, who earned a four-year, US$13.6-million contract extension last June and was playing in Toronto's top-9 forward group, has eight goals and 21 points in 43 games this season. He also missed 15 games earlier in the schedule with a leg injury suffered after blocking a shot against on Dec. 6.

A seventh-round pick in 2013 NHL draft, Johnsson has 30 goals and 67 points in 125 regular-season games to go along with six points (two goals, four assists) in 13 playoff contests.

The minimum eight-week timeline means Johnsson won't be available until the playoffs — if the Leafs qualify — but the prolonged absence gives general manager Kyle Dubas more wiggle room to use his salary savings against the cap to potentially make an acquisition ahead of the Feb. 24 trade deadline.

Keefe, however, is focused on other forwards currently on the roster stepping up and filling the void.

Rielly was clearly dealing with something else injury-wise before suffering the broken foot in an ugly 8-4 loss to the Florida Panthers. The 25-year-old has three goals and 27 points in 46 games in 2019-20 after breaking out with career-highs in goals (20), assists (52) and points (72) last season.

Rookie defencemen Rasmus Sandin and Timothy Liljegren have played well in largely sheltered minutes in the absence of Rielly and now Ceci, who was lost last week, for a club that started the season with Stanley Cup aspirations only to now find itself in a battle for a playoff spot with 24 games left on the schedule.

Toronto is 21-10-4 since Keefe replaced Mike Babcock as coach in November, but 2-3-1 over its last six games and has just three regulation victories over the past 15 outings (6-6-3).

Two points up on Florida — which has a game in hand — for third in the Atlantic Division, Toronto visits the Ottawa Senators on Saturday and the Buffalo Sabres on Sunday.

Newly-acquired backup goalie Jack Campbell, who earned five of a possible six points in three straight starts after coming over as part of a trade with the Los Angeles Kings last week, is slated to get the call in the nation's capital.

Andersen, meanwhile, is scheduled to start against the Sabres after allowing three goals on 16 shots in the loss to Dallas.

"The great challenges for us here is to be able to develop and show that we're an upper-echelon team," Keefe said. "Those teams are the ones that don't get fazed by an injury here or an injury there. We've just got to stay focused on what we need to do well as a group and where we need to continue to grow.

"We hope to be in a better spot as a group when those injured players do return."

This report by The Canadian Press was first published Feb. 14, 2020.