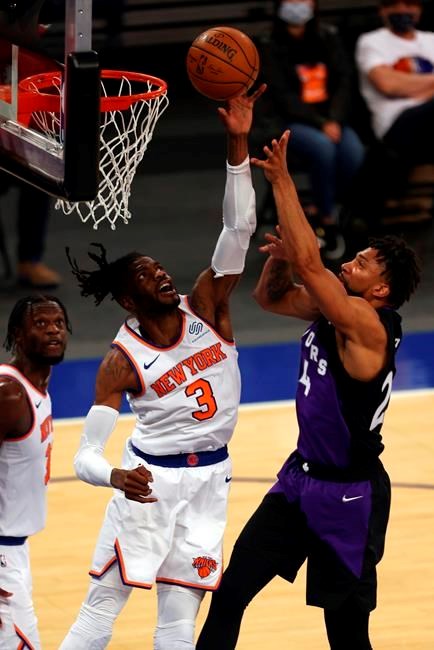 RJ Barrett added 19 as the Knicks (27-27) won their second straight to get back to .500. Nerlens Noel finished with nine points, 13 rebounds and four blocked shots.

New York led 66-48 early in the third quarter but lost momentum when the game was delayed because the court was wet. The Raptors surged to a four-point lead with 7 minutes remaining, but Barrett hit a 3-pointer with the Knicks leading by one with 35 seconds to play.

Elfrid Payton and Derrick Rose each had 11 points for the Knicks, who snapped a nine-game losing streak to Toronto. New York had not beaten the Raptors since Nov. 22, 2017, at home.

Gary Trent Jr. had 23 points and Chris Boucher added a double-double with 17 points and 14 assists for Toronto.

Kyle Lowry finished with 19 points in his return to the Raptors’ lineup after missing five consecutive games with a right foot infection.