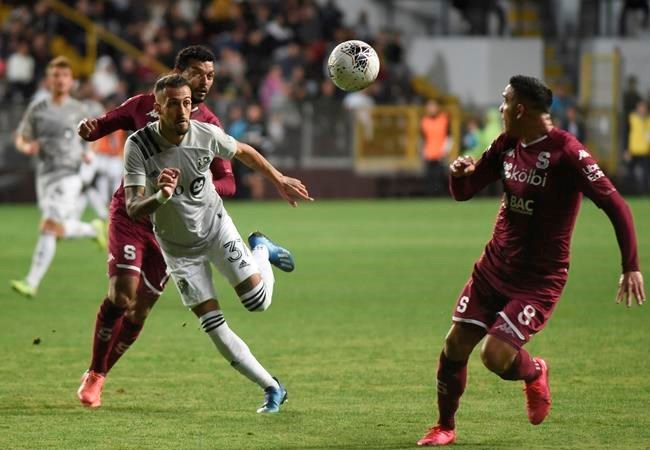 MONTREAL — Thierry Henry is happy his home coaching debut will be a high-pressure knockout game for the Montreal Impact.

The Impact host Costa Rica's Deportivo Saprissa in the second leg of the CONCACAF Champions League round of 16 on Wednesday.

Montreal needs a victory or a 0-0 or 1-1 draw to advance to the quarterfinal on aggregate after the teams tied 2-2 in the opening leg in Costa Rica last week.

"It is a real game where it matters — for me it always matters — but this one obviously matters more because you can be out after the second one," Henry said Tuesday. "You're playing against a good team. We brought something back home to see if we're able to go through.

"We have to hold off as long as possible."

In the first leg, Montreal jumped to an unexpected 2-0 lead following first-half strikes by midfielder Orji Okwonkwo and forward Romell Quioto — two crucial away goals that give the Impact a slight advantage in a two-legged aggregate series.

Saprissa increased the intensity in the second half with sustained physical play and dangerous crosses into the box. Goalkeeper Clement Diop needed to make a couple of goal-line clearing saves for Montreal.

But the Impact ultimately faltered and conceded twice in the final 10 minutes.

"Saprissa made a lot of tactical changes in the second half," said midfielder Samuel Piette. "It caught us off guard just a little bit. Now we know what to expect for (Wednesday).

"It's a delicate situation. I don't think we should play too defensively and look for that 0-0 score. But obviously if you push forward, you create gaps between players. It's about finding the right balance."

Camacho (knee) is out at least four weeks while Okwonkwo and Quioto are day-to-day. Speedy Finnish winger Lassi Lappalainen is also day-to-day while Saphir Taider, who missed the first leg, will be available.

With the injury to Camacho, there's a good chance 18-year-old newcomer Luis Binks makes his Impact debut at centre back. The former Tottenham Hotspur academy player signed a contract with Montreal last week.

Henry won't use his players' lack of match fitness — and the injuries — as an excuse on Wednesday, though.

"I didn't expect in the first game that we were going to lose two players in the first 27 minutes. That's something that you cannot predict," Henry said. "Those are facts, yes, but we can't keep talking about it. We need to respect what Saprissa did in that game.

"What I liked is the way we battled against a very good team that knows how to manage the ball, be patient and make you run from side to side."

Henry would not reveal if he intended to duplicate the defensive 5-2-3 formation, with Bojan as primary striker, that proved successful for the first half in Costa Rica.

Part of the challenge for both teams will be getting used to the artificial turf at Olympic Stadium, which Saprissa midfielder Johan Venegas said was not in perfect condition.

"I am very excited to be back," said the former Impact player, through a translator. "As soon as I found out we had to play here, I was very happy. It's a huge stadium. It's a beautiful stadium. The pitch is a little bit damaged, but it is what it is. We still need to perform.

"Scoring an away goal in the beginning of the game will be very important for us because it will put us in control of the game."

The winner will face the Seattle Sounders or C.D. Olimpia of Honduras in the quarterfinal. Their first leg also ended 2-2 last week.

STRAIGHT TO PENALTIES: If the second leg is tied 2-2 after 90 minutes, the game will go straight to a penalty shootout instead of extra time.

FOURTH TIME AROUND: The Impact are making their fourth Champions League appearance. They qualified in 2008 (quarterfinal), 2013 (group stage) and 2015 (final).

NEW SEASON BECKONS: After the Champions League match, Montreal goes right back to work on Saturday when the Impact host the New England Revolution in their Major League Soccer season opener at Olympic Stadium.