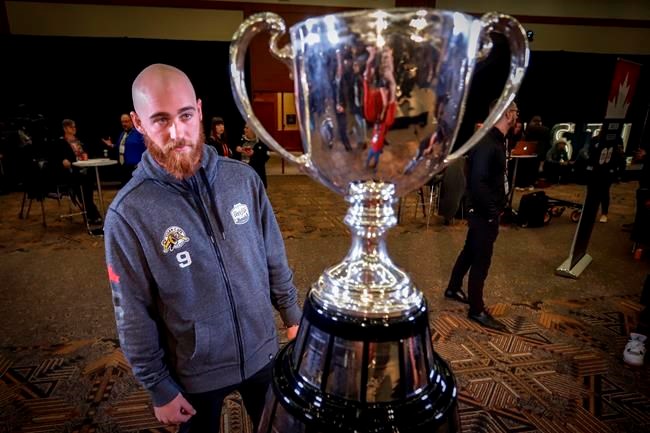 CALGARY — Hamilton Tiger-Cats quarterback Dane Evans says he was thinking about hanging up his cleats before agreeing to give the CFL a shot. Now, he's one win away from winning a Grey Cup championship.

Evans, 26, was afraid his career was over after being cut before the end of training camp with the NFL's Philadelphia Eagles in 2017.

He returned to Tulsa, Okla., where he had played under head coach Phil Montgomery at the University of Tulsa, leading the team to 10 wins in his senior year. He volunteered to help out the Golden Hurricane as a coach.

"I was at a crossroads. I know when I'm done playing I want to coach," said Evans, who was born in Oklahoma before his family moved to Texas when he was six.

"It wasn't because I didn't love the game or anything. I honestly thought nobody would want me. I've always known since fifth grade that when I'm done playing I want to be a coach and so it was just the next step for me."

Coach Montgomery said he has no doubt Evans will eventually be an outstanding coach, but that time isn't now. Evans will lead the Ticats into Sunday's Grey Cup against the Winnipeg Blue Bombers.

"For me, it's always a tough decision when you have to hang them up and trying to move on with whatever your life is going to present," he added.

"I don't think he was ready to be done playing so when the opportunity came up for him to go up north and play he jumped at the chance."

Evans said he has watched the CFL as a fan for years on ESPN and found out he was on Hamilton's negotiation list before signing with the team late in the 2017 season. He said 'Coach Monty' encouraged him to stick with the game.

"He could see that I wasn't done and I knew I wasn't done. I just didn't know if I'd get another chance and instead of just sitting there and feeling sorry for myself."

"I got to work with Dane closely and just got to watch him as a man, listen to him in the huddle, lead, watch his unwavering support of (fellow quarterback) Jeremiah (Masoli)," Steinauer said.

"Just his preparation and just willingness to do whatever it took to be the best he could be and I think that's what we're seeing currently."

Ticats star receiver Brandon Banks wasn't surprised that Evans was able to take control of the team after Masoli's season-ending injury in August.

"I always knew what kind of guy Dane was and he's a professional athlete at the same time so I knew he was ready when his number was called. He's a gunslinger," Banks said.

"He just needed opportunity and obviously he got called probably sooner than he thought he would and he just took advantage of his opportunity."

Evans has played in several U.S. college bowl games, but his first big game was when he was 12.

"I won a national championship in Pop Warner football in fifth grade. That was a pretty big game for a 12-year-old. We won 15-14 ... a real barnburner," he said with a laugh.

Montgomery predicts Evans will only get better the more he plays.

"He's going to continue to get better every week."